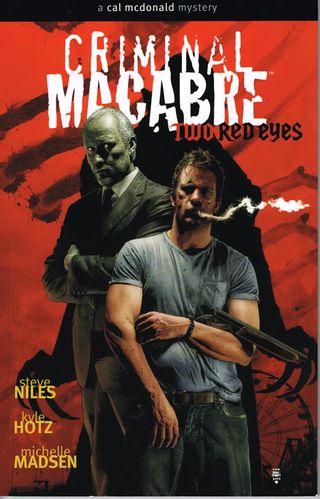 That walking pill box, Band-Aid strip, and Phillip Morris cigarette pack rolled into one, Cal McDonald, once again gets beat up bad, smokes more than a few, and tangles with impossible odds that scare the dead enough to steer way clear of him. Only this time, after all this doom and gloom build-up, the odds even up pretty quick, and surprisingly easily, in the last few pages of this four issue graphic novel.

You'd think Nosferatu, after demolishing the Santa Monica Pier upon his arrival, would do more than gloat as he and McDonald duke it out. No way. Instead, Steve Niles let's the vampire manhandle McDonald, and his loyal ghoulfriend MoLock, only just enough to stretch their necks to the breaking point, then pulls out the too simple gimmick of third-party intervention to save their smoked butts. Perhaps Nosferatu was too badass even for Niles to figure out a more McDonald-involved solution?

At least it's quite a build-up to that takedown letdown. Kyle Hotz makes Nosferatu glow with menace and us hurt just looking at McDonald's bruises. The police are out to get McDonald, we know why, and Nosferatu is out to get him, not quite sure why since McDonald's small fry in comparison, and the lycanthropes make a play to get him while he's busy puking past his withdrawal and nicotine starvation in the hospital. A text message from McDonald's girlfriend's phone sparks his recovery. Who'd have thought old Nosferatu could type with those claws on such a small phone?

You'd think four issues wouldn't be enough to hold all this menace and you'd be right. The easy-breezy showdown takes place at the Hollywood sign, no idea why. Maybe Niles is trying to tell us something with those big white letters.