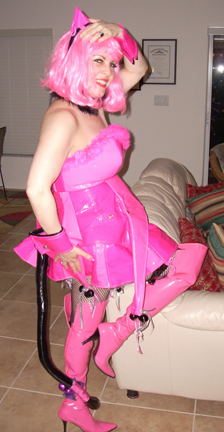 I like to make fairly elaborate costumes and get dressed up for Halloween. My favorite costume of all time is anime character, Kitty Cat Sakura (see photo in this article.) Beyond that, I like the feeling of the restless spirits walking the Earth. It gives us a knowing that there’s something beyond this physical plane. When I had a home dungeon every day felt like Halloween, but the room was breaking down and I had to have it knocked down and replaced it with a sunroom. So now Halloween is pretty much back to once a year. Another reason I like Halloween is that it’s the one day out of the year that adults legitimately get to play.

I’d make elaborate costumes for myself and my boyfriend, Eric. We’d meet our friends, Peter Pan and Tinker Bell and go out to dinner at my favorite restaurant, Carmine’s in Ybor City, in Tampa, Florida and then we’d go to the best Goth bar ever, The Castle. People at The Castle are very serious about their costumes, so it’s always a spectacle and a huge blast. I’ve visited Goth bars in a lot of different cities, and nobody does it better than they do.

My favorite Halloween artifacts are my Living Dead Dolls, especially Sadie and Walpurgis. I keep them on my writing table for company and inspiration. The other Living Dead Dolls pretty much hang out in my bookcase. Sometimes I find them in different positions in the morning, but that might be due to my cats. I like to think they move on their own, however.

My parents dressed me up like Snow White and took me around to relatives’ houses. They didn’t want me to do the door-to-door trick-or-treat thing until I was older. Yes, I was an only child and very sheltered. It was still great though, because at that point it was all I knew, and I loved the creepy feeling of Halloween from the very first.

What's the one question you want to be asked and what's your answer?

Q: What was your most memorable Halloween spent away from home?

A: One year I went to Paris for Halloween, and I was so excited I even took some bat wings with me. But then I found that they don’t celebrate Halloween at all. The only people who were dressed up were in theShakespeare Book Store, which is American. It was still a great night, though. It was odd to realize that Halloween isn’t universal.

Hope everyone has the best Halloween ever!

A unique piece on a very unique individual! Very cool!