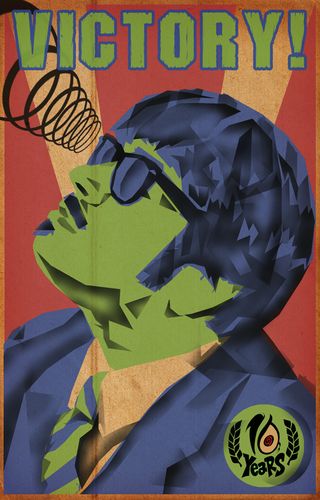 Five questions asked over a glowing Jack o'Lantern, under an Autumn moon obscured by passing clouds...in between mouthfuls of candy corn...with Mr. Lobo...up all night at Cinema Insomnia...

For the world it’s a time when adults can give themselves permission to act like kids. And kids are able to dabble in the adult arts of overindulgence and masochism. On a personal level, it’s more economic. Mr. Lobo tends to eat better around Halloween. As a working genre personality/ horror host, it’s our “bread and butter” time--Well, “brownie and peanut butter cup time”. Not only does Mr. Lobo have more work, we also like to hit the sales the Day After Halloween to do my yearly shopping for –Well-Everything…clothes, kitchen wares, pantry items, birthday-X-mas-Valentines-Mothers Day-bereavement gifts! It’s the only time I can buy amenities and necessities that suit Mr. Lobo’s demanding tastes and at deep discounts.

The season begins with an experiment where we mutilate gourd-like squash of the genus Cucurbita and let them rot on my front stoop. Not having dental insurance, this is the time of year Mr. Lobo likes to prepare and eat Carmel Apples--to remove any loose are damaged teeth or inferior dental work. It’s always a hoot to make embarrassing or cumbersome costumes for my children out of recyclables. Mr. Lobo is a workaholic--so ideally we will host film shows, make misunderstood movies, and as a legal reverend, marry a Goth couple or two. And Finally, as Mr. Lobo does every “Devil’s Night”, we soap windows, TP the CVS, smash and destroy early Christmas decorations at major department stores, crank call my mother, and set fire to television stations and sponsors that have wronged Mr. Lobo or CINEMA INSOMNIA in the past 10 years of the show.

The cheap 49 cent glow in the dark vampire teeth—the kind that come in a little sealed plastic bag and the tops and bottoms are connected with excess plastic: They make you drool like a teething Saint Bernard and they cut your gums so you’re leaving steamers of crimson slime at everyone’s front porch.

I’ve found that that a lot of Elvira dolls are badly made, it goes to prove how hard it is to capture her combination of sexy, silly, and scary…I have one with a witch hat and broom made by Figures Toy Co. that looks like a drag queen with Down Syndrome.

I also like to collect spooky Pez dispensers and those flimsy vintage Halloween treat bags that can maybe hold like 6 and a half pieces of penny candy. Even though they are maddeningly impractical—Mr. Lobo loves the kitschy artwork!

That would be three years ago. It was OK.

Just Kidding. Y’know, it was great when it all began. Mr. Lobo was a regular Frankie fan. I had a Don Post Frankenstein Mask when I was 5 or 6 and I remember wetting it in the sink to make the cut on his forehead look real.

Also, at a school contest I made a classic cardboard box/ tinfoil/ dryer hose robot costume and won a free ice cream at Baskin Robbins--or what I called it: “31 Flavors”. I also remember the belly aches and thinking I would die after consuming Pop Rocks and Coke.

Great. Now I get to do YOUR JOB!

I have some novelty songs on iTunes including one called “HALLOWEEN CANDY” and I also have over 20 full length CINEMA INSOMNIA episodes on YOUTUBE on our “CINEMAINSOMNIATV” channel including several HALLOWEEN SPECIALS. So I suppose a question I wished someone would ask would be…

Q: Isn’t it amazing that your song “HALLOWEEN CANDY” is the most downloaded song in history, easily eclipsing THE MONSTER MASH and that more people watch CINEMA INSOMNIA episodes at HALLOWEEN than anything else in all of media?

Posted at 08:00 AM in Halloween (Memories), Horror Hosts | Permalink

Hardcore Halloween fan there, that's for sure! Gonna have to check out this "Halloween Candy" song!