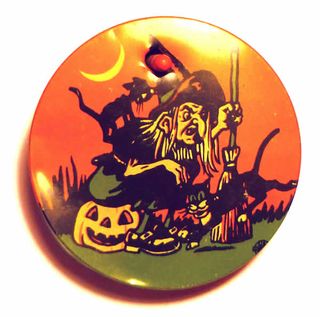 Wow, I could write an entire book to answer that...oh, wait - I've written three already! Okay, seriously...Halloween is just such a rich holiday that operates on so many levels. As a kid, I loved the empowerment of wearing a costume and being paid off in candy (and the better the costume, the more candy!).

As an adult, I love the creativity, the seasonal aspect as we change from summer to winter, and the celebration of fear but done in a whimsical way. I think it's healthy to have one night a year where we, collectively, impersonate, mock, and honor death.

I love seeing what people do to transform both themselves and their surroundings on Halloween. Every year I drive to locations where I've heard there are spectacular home displays (those are also usually where you get the best trick or treat costumes). I love the seasonal foods, so I have to eat a pumpkin stew and pumpkin seeds and even Halloween cookies from a local bakery. I'll probably wrap up the night by tuning in whatever horror movie or special is on television - the older the better!I'm ashamed to say I've never been to our local West Hollywood celebration, but I'm not a huge fan of crowds or traffic. 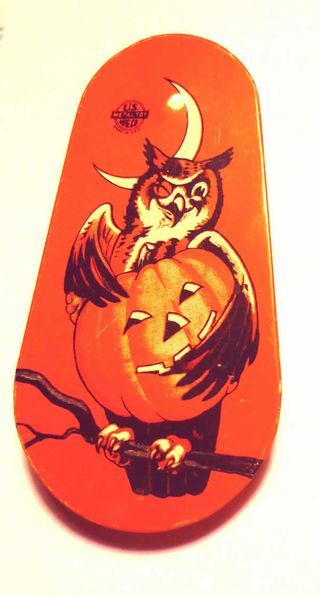 Oh boy, I've got a lot I love. As the author of three illustrated Halloween books, it's been (ahem) convenient to collect a lot of stuff that I could use as illustrations in the books, everything from vintage postcards to antique books to modern folk art and toys. But I think I have a special fondness for vintage noisemakers.

One of my favorite pieces of Halloween non-fiction writing is an essay by Carl B. Holmberg called "Things That Go Snap-Rattle-Clang-Toot-Crank in the Night: Halloween Noisemakers" (from the book HALLOWEEN AND OTHER FESTIVALS OF DEATH AND LIFE), and that essay really got me started on noisemakers. Strangely enough, I never used noisemakers as a kid (apparently they never really made it to the west coast), but I just love their colorful graphics and the idea of kids making scads of noise with these things on Halloween night. I've attached photos of two that are probably my favorites: You can't beat that image of the witch with her cats, and the winking owl with the jack-o'-lantern just somehow always make me smile.

The first one I really remember was probably when I was in first grade (I think I was seven), and my favorite show was this ridiculous thing called IT'S ABOUT TIME with cavemen, so I wanted to be a cavewoman. My dad's a hunter (and still is, at 83!), so he made me this costume from an honest-to-God deer hide, and my mom ratted out my hair, and it was all very authentic. The only bummer part was that I was too small to lift a real wooden club, so I had a plastic club. I remember parading proudly in the school costume pageant around the playground, and being really proud of that costume.

Q: Lisa, if you could travel back in time to witness Halloween in the past, when/where would you go to?

A: Well, Lisa, that's a tough one...but I think I'd have to say that I would love to take part in an 18th-century Scottish party, such as Robert Burns describes in his poem "Hallowe'en". The night was one full of magic and romance and a little bit of spookiness, and it's no wonder the Scots loved the holiday so much.

Great piece! She has a true love this awesome holiday!