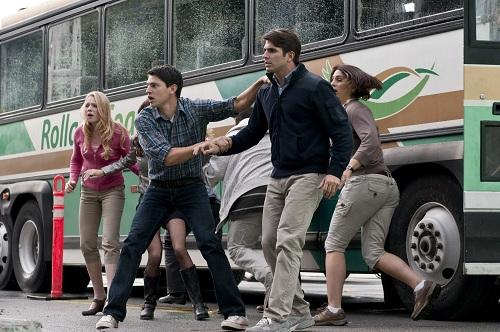 First, Final Destination 5 is slick slacks franchise-pressing, albeit drenched in body tissues and glistening blood most of the time. Second, because of this, there are no surprises. I don't recall the take a life, live a life gimmick used before, but everything else is the same: pretty people die horribly, the END. The ways they die is the kicker that brings us back again and again. But for how long?

We all ready know you can't cheat death because Coroner Bludworth (Tony Todd) tells us so in every installment.  But an important question is brought up by Sam (Nicholas D'Agosto). He's the one who sees Death's de facto dire predicament ahead of the appointed departure time and warns everyone. He's confused. Why get a glimpse of doom if you can't change the outcome? My simple answer is it would kill the fun of watching people being mashed, mushed, and medlied in escaltingly convoluted ways. But is that all there is to it? Will Final Destination xx be the same formula setups, the same befuddled victims, and Tony Todd's (hopefully) Coroner Bludworth repeating the same dictum: Death will always crash, crush, spindle, mutilate, and amputate your pajama party? I hope not. That would be worse than death.

A company retreat brings a busload of employees to their rendevous with a bridge collapse. Sam's frantic warning after hearing Dust in the Wind saves his boss (David Koechner) and his friends Molly (Emma Bell), Peter (Miles Fisher), Candice (Ellen Wroe), and Nathan (Arlan Escarpeta). He also saves Isaac (P. J. Byrne), but Isaac is a cretin, not a friend. Seeing the collapsing bridge and how everyone is supposed to die will make gore fans happy. Personally,  I don't think computer- generated gore is as viscerally pleasing as the old fashioned, hand-turned variety because it shows up too 'succinct' on screen, especially with how entrails burst out and splatter. Am I wrong?

Death's cheekily  improvised ways for gruesomely killing off escapees from the precipitating mayhem are succint also, but Steven Quale manages to build adequate suspense around each personally constructed building-blocks-for-quietus and red herrings by muddling the how of what we all ready know must happen. The imaginatively messy demises include a very spirited gymnastic body split, an acupuncture misadventure, and a laser eye surgery flop-plop-squish I'm sure will annoy medical professionals. Then again, acupuncturists will not be happy, either. I'm sure the very long and rediculously thick needle Isaac pulls--nice big closeup here--out of his chest is definitely not one used by any acupuncturists I know ( or want to). If it's metal fatigue tiring, electricity shorting sparkily, water puddling deeply, wrenches left around carelessly, fan blades whirring ominously, or flames licking closely, Death is sure to capture the anticipated moment.

Since Isaac is a cretin and Sam's boss is a company toadie, we don't care about them much and--yes, I'll admit it--we enjoy watching them die. The piece de resistance is the Buddha bust finale, even if heads really don't easily burst open like watermelons. But Sam and his friends are young, hip, and darn cute. They even act well beyond the needs of Final Destination's Dr. Deadly's Monster Scenes requirements of victimization and terminus. There's a stronger story of desperation waiting to be emancipated in this franchise: and when will Coroner Bludworth make a stand?

Although Final Destination 5 is shown in 3D, I didn't get a strong sense it was entirely shot in 3D. The now standard pointy-objects-jutting-in-your-face are handled on cue, but the strongest dimensional effects are seen in the lengthy opening credits, shattering glass montage. The 3D effects in The Final Destination 4 are better.