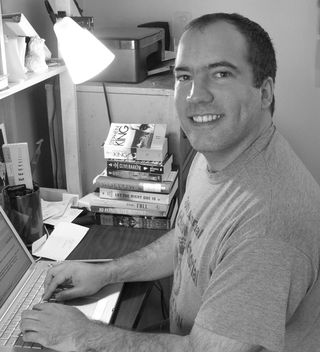 Author Chad Helder walks the twisting path between the grim fairy tale and the dark forest. Meet him right now...in his own words...near a dark playground nestled deep within the brooding pines.

After attending the Horror Writers Association’s Stoker Weekend in New York a couple of weeks ago, I’ve been reflecting on why I am a horror writer. For me, being a horror writer is my personal response to being gay. With all of the cultural pressures and individual fears associated with being gay in a homophobic society (fear of rejection by family and church community, fear of AIDS, fear of hate crimes, and--worst of all for me--fear of becoming a reviled stereotype), each person responds in an individual way. I became a horror writer.

Growing up in the ‘80s, I was exposed to a variety of negative gay stereotypes. One of the unfortunate psychological responses to living in a homophobic culture is to internalize homophobia, which becomes a strain of self-hatred.  I think Jung’s concept of the shadow is very helpful to understand this. Wanting to deny the emerging gay feelings and desires, I banished them to the shadow side of the psyche--the same place where all unwanted thoughts and feelings are banished. Then a strange thing happened--my unconscious mind associated my fear of becoming gay with the monsters of the horror genre. I don’t intend to make this sound like some kind of simple cause and effect scenario--I actually find it to be quite mysterious.

From the time I was about fourteen-years-old until my mid-twenties, I had a horrifying series of nightmares about Satan and vampires. For me, these universally recognized shadow figures embodied my fear of becoming gay.

For a terrifying summer before I started high school, I was preoccupied with being possessed by Satan. It seemed that Satan could hear my thoughts, and he was waiting for me to slip up and allow him inside. In retrospect, this fear of having my body taken over by Satan (or by vampires) seems a vivid metaphor for becoming a gay man against my will.

After many years psychological work and finding a wonderful partner, I consider myself to be a very well-adjusted gay man--and a very nice, caring person to boot. However, the shadow side of my psyche is still populated by monstrous vampires and Satanic shadow figures. I’ve heard it said that the unconscious mind does not know time.

Over the years, I explored these connections between queer theory and the horror genre on my blog, which eventually led to editing an anthology of queer horror with Vince Liaguno. The anthology is called Unspeakable Horror: From the Shadows of the Closet, and it won the Bram Stoker Award for Superior Achievement in an Anthology, which was a wonderful validation for all of the exploring, blogging, and theorizing about the underpinnings of queer horror and those closet chapters of my earlier life. 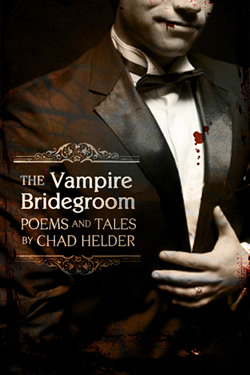 My new book, The Vampire Bridegroom, is my poetic response to all of this. I consider it to be a dark and perverse book, filled with taboo sexuality, dark humor, horrifying shadow figures, monstrous child molesters, and grotesque queer stereotypes. It is my ultimate attempt at writing a horror book--a poet’s horror book. I know that sounds grandiose, but what I mean is that I held nothing back, for better or for worse. Even though my writing emerges from the contents of my shadow, I don’t mean to suggest that I have any control over what emerges, or even that I fully understand what I write--my own writing is very mysterious to me, and I’m not writing autobiography. I sometimes think my family believes everything I write is some kind of carefully controlled statement about my life--not true at all. For me, the creative process is defined by mystery.

As a young college student, I wanted to be a short story writer like J. D. Salinger. I had written some horror stories as a teenager, but I was too afraid that horror stories made my personal demons stronger, and horror movies made me sick with fear.

It was when I started writing poetry in 1994 that the horror genre finally claimed me. I was a twenty-one-year-old college student enrolled in an introductory poetry writing class. I remember telling a friend that I didn’t think I could do it--metaphors were too difficult, I said.

And then I started writing a poem about being a preacher’s son when Satan took over the poem. It is still one of my favorite poems (collected in Pop-Up Book of Death):

Tissue-thin Bible pages crackle in the background of the radio show.
The narrator's voice escapes from the underworld through the airwaves.
Any Christian can tune in.
My brain sprouts supernatural transmitters,
and He hears me when I think His name.
I know His operatives listen
because the Ouija Board knows my birthday.

Satan crashed our Malibu by remote control,
and when I cracked my forehead on the dashboard,
His voice electrified me through the speaker in the door.

Sometimes, on Sunday mornings,
I wake with my head in a concrete block
that tastes chalky,
but I can pace it away in brown socks and a tie.
Before service, I stand in the sanctuary
where the orange pews buzz like madness.
Staring one-eyed through red-stained glass,
I know how Satan sees the churchyard.

The council implanted a secret microphone in the minister's throat.
He took it like a pill,
and the device clutched his vocal chords
with hundreds of microscopic prongs.
Now his voice thunders in the sanctuary,
drowning out the tiny voices during hymns.
But during prayer, when the congregation seals their eyes,
a force disrupts the transmission.
The device malfunctions,
and I see his lips move to different words
while slivers of smoke leak out a nostril.

Downstairs, after service,
the children line up for watery punch.
Jim Jones has returned from hibernation.
I put teeth marks in my Styrofoam cup,
and underneath my Kool Aid mustache
hides a forked tongue
stained the color of cherry. As I continued to write poems, images from the horror genre appeared in metaphors and subtexts. I created dramatic monologues with insane narrators who told stories about the darkest closets of human nature. As a writer, the nightmarish world of the surreal became much more important to me than dramatic realism.

Later, I became obsessed with poems that want to be horror movies. I wrote a series of flash fiction stories (more like prose poems) that are actually modeled after the storytelling in movie trailers (a lot of trailers tell the entirety of the story--even hinting at the climax).

In 2008, I wrote a series of comic book scripts, and writing for this highly visual medium also profoundly impacted the storytelling in my poetry.

The connections between the horror genre and the world of fairy tales has also fascinated me for years, and the resonant power and themes of the fairy tale world (abandoned children, beastly transformations, and horrifying bridegrooms) has profoundly influenced my poetry.

I am very fortunate to have two collections of poetry and storytelling recently released. The Pop-Up Book of Death, which collects a wide range of poetry all the way back to 1994, was released by Rebel Satori Press at the end of 2010. The Vampire Bridegroom, just launched at Stoker Weekend, published by Dark Scribe Press, collects all of my horror poems and storytelling of the last ten years with a few pieces dating back to those early poetry writing days in college.

For me, being a horror writer means journeying into the shadow side of the psyche to see what emerges. I suspect that all horror writers have highly active shadow zones in their psyches for a variety of mysterious reasons.

I leave you with a horror poem from The Vampire Bridegroom:

Once a psychic vampire buried himself under a playground.
Mrs. Hartman’s third grade class responded
to the subconscious knowledge of the vampire's presence.

The vampire hibernated six feet under the monkey bars
in the moist wormy earth.
The children built Gothic sandcastles above the grave.
When it snowed, they built deformed snowmen.
The vampire loved the tributes from the children.

The vampire had special talents:
He milked the spectral life force from the children
when they played on the monkey bars.
He nursed through a silvery spectral cord,
an invisible straw-umbilicus;
their little hearts
did the pumping for him.

Other symptoms of the vampire's presence emerged:
A schoolboy, stricken with nightmares,
snuck out at the witching hour
and hanged himself on the monkey bars,
still wearing his urine-stained pajamas.

Great colonies of strange ants formed,
mutations that thrived off of the spectral energy
emanating from the grave,
the children all covered with bites.

The children grew weak and gaunt from their offerings.

The children drew their daily crayon pictures
in tribute to their master,
a grandfatherly old vampire beneath the monkey bars.
They drew their stick-figure selves
dancing and playing on the sandy surface
above the cocoon-grave; soon they added fangs.

When a boy drew his crayon portrait of the vampire
stroking an erect penis in the grave beneath,
a superstitious father developed a prescient hypothesis.

Using the classroom drawings as a guide,
the father rented a backhoe to dig up the earth
beneath the monkey bars.

The clever detectives discovered a man
buried beneath the monkey bars
in the spectral vampire's abandoned grave:
the corpse’s skin white like peeled eggshells
and shriveled beyond recognition.

The doctors admitted Mrs. Hartman to the lunatic asylum.

The superstitious father returned home
at breakfast time,
and the boy with the crayons
welcomed the vampire master
behind the replica-mask of his daddy.

A captivating account that gives one pause to ponder. I guess a lot of writers come forth from within. The other side of the coin are those of us who peer at the outside and try to make sense of it. Either way the human experience is documented at this vanguard of culture.

Words will never fail you.