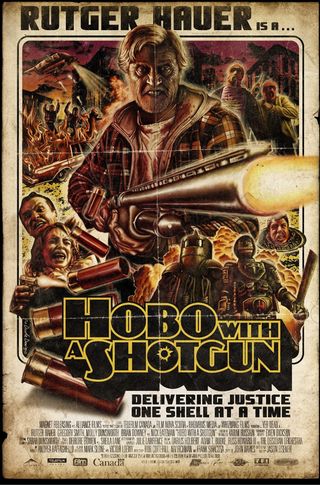 Zombos Says: Good (for gore and Trash Cinema fans, that is)

We were in the cinematorium discussing what the hell Hobo With a Shotgun was about. I love Rutger Hauer, and he's perfect in the role of Hobo, with his craggy face and sparkly eyes under all that grizzle, but really, what the hell?

"He left during the busload of children fricasseed by flamethrower interlude," I said.

Trash cinema isn't Zombos' usual thing anyway, especially when it concerns fricasseeing kids. Come to think of it, it isn't mine either.

While not as sexually outrageous and bizarre as Tokyo Gore Police or as repulsive as Street Trash, Jason Eisener and writers do a wild job that comes close, saturating this golden turkey with over the rainbow colors, plotting an absurd predicament even Albert Camus would find mind-numbing, and serving up a heapful of over the top—and under the bottom—caricatures. There's a golden-hearted hooker (Molly Dunsworth), a hobo with a dream of owning a lawn mower (to start a lawn mowing business, of course), and The Drake (Brian Downey), a criminal boss crushing the heart and soul out of Hope Town to create his own Scum Town. It's silly, stupid, insulting, crazy, trashy, exploitative, and quite aware of all these things. Not to be taken seriously, it is seriously grindhouse as the blood flows, heads roll, and blacklight poster situations increasingly take on the look and feel of a psychedelic-fueled withdrawal.

"So, what did you think?" asked Paul, running his hands through his long black hair. His blue eyes beamed at me expectantly.

I took a deep breath. "I have conflicted feelings about it. Hobo With a Shotgun is like passing a bong around, with each toke building to a highpoint of intoxication only to eventually downslide into nausea."

"Exactly! That's the beauty of it. It's mired in dirty realism and transgressive angst," beamed Paul.

Maybe to a Charles Bukowski fan, I thought, but didn't voice my assumption. My impression pretty much formed when Abby, the heart-of-gold hooker with a bear fetish, gets her hand mowed off, then uses the boney stump to stab The Drake again and again. I admit there's a sense of poetic justice tucked away in there somewhere, but it's buried under the gore and screams.

Irony and sardonic mawkishness go ozone when Hobo walks into the Pawn Til Dawn pawn shop and sees his heart's desire, a lawn mower for $49.99. There's nothing that says ‘home’ more than a freshly mowed lawn. To get the money he lets a sleaze-ball (Pasha Ebrahimi) with lots of cash and a video camera tape him getting his teeth knocked out by another bum. Money in hand, just when he's about to pay for the mower, schizo-robbers come in and threaten a mom and her baby.

The shotgun hanging on the wall in back of the counter is also $49.99. He makes the tough choice all trash cinema heroes must eventually make. So instead of mowing grass he mows down bad guys, cleaning up the streets one shell at a time.

In-between the hospital hangings, the manhole cover necklaces, the mobs turning against hobos, and the Plague Twins showdown—motorcycle creepizoids dressed in Boilerplate—Abby, the hooker and hobo's only friend, spends a lot of time with blood on her face, and hobo finds out if he can solve the world's problems with a shotgun bought at $49.99, shells gratis.

Of course, if this movie was called Hobo With a Lawn Mower, things might have been different.

That sums it up well. I try to avoid watching horror movies with my wife because of that potential awkward moment you describe.

I was definitely conflicted myself about it. At the end of the day, I thought it was a worthy rental on VOD, and I even would pay $20 for it to have it sit in my DVD collection as an enticing piece to unsuspecting guests, good for some later drunken laughs. I just kinda looked at my girlfriend and laughed after we were done watching it, not really knowing what to say. It was what it was, really.