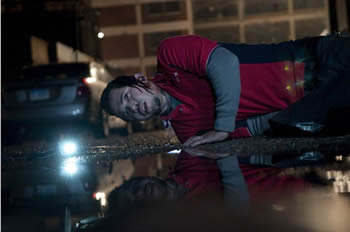 Rosemary: We can wait till morning.
Luke: You sure there's one still coming?

The problem with Vanishing on 7th Street comes into view at a critical moment, when time is of the essence. In a movie that plays its shadows menacingly long across city walls while Detroit's streets go empty after almost everyone has inexplicably disappeared into an unnatural darkness--leaving only their clothes behind--and where light is the only defense but its slowly dying out, the handful of confused survivors talk too much. Nothing they say is important enough for them to take the time to say it,  not when menacing things prowl all around them, inches away, waiting for the light to go completely out.

Here's what I mean. I'll give you the setup first. Luke (Hayden Christensen) and Rosemary (Thandie Newton) have left Paul (John Leguizamo) and James (Jacob Latimore) in Sonny's Bar. The gas generator powering the bar's lights is failing. Luke insists on going for the one truck in all of Detroit that still has enough juice in its battery to shine its headlights, but not enough to start the engine. He figures if they push it to the bar, he can charge the truck's battery off the generator just enough to turn over the engine and drive them out of the city. Luke and Rosemary head out, armed with flashlights, a bunch of those crack-and-glow sticks people wear on Halloween and at the circus, and a sense of urgency: they need to make it back to the bar as fast as possible because the gas generator is on its last gasp and James, a twelve year-old kid minus his mom, and Paul, the theater projectionist who's suffering from shock, will be sucked into pitch blackness if they fail. And with the generator dead, there's no way to charge the truck battery so they can make their escape on wheels.

Sounds intense, doesn't it? If you've seen Darkness Falls, you know how nerve-racking fighting the darkness can be for movie-people when it fights them back.

Luke and Rosemary hustle to the truck. Their feeble light is flickering. The light in the bar is flickering. The shadow people popping up all around them, straining at the edges of Luke's flashlight's fading glow, are almost able to wrap their long, shadowy arms around him and Rosemary. Shadowy images of gigantic hands reach out for them. Ominous, vaguely human silhouettes chase after them. Barely making it to the truck in time, they snap on the headlights to dispel the shadows. Time continues to run out. They now need to quickly push the truck back to the bar before its battery dies and the headlights go out; before the bar's lights go out. They push hard.

Half-way there, Luke and Rosemary take a break to rest and mope. A Walmart 15-minute kind of break. Granted Luke has a swollen ankle, but frankly, it won't hurt if he fails.

They sit down by the car and ponder. Apparently the moping session they argued through before, when they first met in the bar, when Rosemary stumbles in looking for her kids, almost shoots him, and then blames it all on God's wrath on all of mankind for sinning, didn't waste enough of their precious time. Situational credibility gone. Setup tension broken.

Brad Anderson and Anthony Jaswinski trip over their own two frames. It's the proverbial 'kill the moment' moment. In dire situations, people don't think and chew on their words or thoughts slowly. If you or I were surrounded by piles of clothes formerly filled by people, and surrounded by an evil darkness reaching out to grab us from all the unlighted nooks and crannies, we'd--I have no doubt--be busting a move like our lives depended on it. I'd think even Sarah Palin would have to agree with this one: you betcha!

Vanishing on 7th Street is still a good movie. It just, oddly, ignores common sense to give character depth at an inopportune time, and when we don't need it. Up until then, the enveloping creepiness, the unknown evil intention of it all, and the Lovecraftian doom that came to Detroit is palpable. It is a movie that glues our nerves to jangle because what's happening is so alien and everyone is so screwed because of it. You can't help but hope for the best, even knowing the worst has to happen. Anderson and Jaswinski hold our attention and bring it deeper and deeper into the mystery.

Until they fumble and kill the moment.

Agreed, some of the moments seemed forced -- but that first 15 minutes -- man, almost a classic