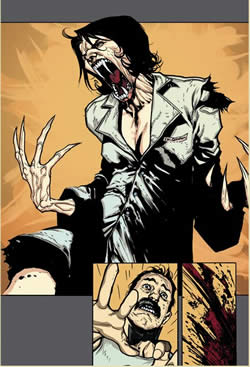 What should they be?

There are bloodthirsty killers and blood-drained dead aplenty in the hardcover edition of American Vampire from Vertigo. It collects the first 5 issues of vibrantly colored panel-stretching art from Rafael Albuquerque and colorist Dave McCaig, detailing the two side by side stories that tell the death and times of the American-made vampire, Skinner Sweet. Cover art, sample script pages, and a foreward by King and afterword by Snyder are also included.

I was surprised to see how concise Scott Snyder and Stephen King's script pages are. Comprised mostly of dialog, they leave ample room for Alburquerque's interpretive embellishments with visual characterization to imbue emotional energy into each panel.  Snyder's story begins in 1925 Los Angeles where Pearl and Hattie, two yearning-for-stardom actors in Hollywood, become intimately acquainted with the blood-thirsty--thirstier than usual, anyway--movie moguls running the studio. Stephen King's story begins in the 1800s to tell how Sweet's taste for sweet candy turns to the sour-sweet taste for warm blood. 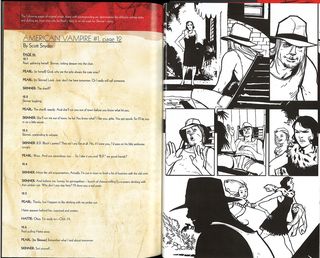 King's writing stands out for its cussing, brutal killings as Sweet takes revenge on lawman Jim Book, and for narrator Will Bunting, a newsman who was there at the time. Bunting wrote a dime novel about it called Bad Blood. We meet him when he's promoting the reprinting of his book at the Sagebrush Bookstore. Three people are in attendance--two are awake--as he recounts the truth behind his "fictional" tale.

Old World European vampires running the rails, tired of Sweet's train robberies, run afoul of Sweet's ill-temperament and newly- acquired abilities, which include walking in sunlight, long razor sharp claws with the strength to wield them,  and an expanding jaw with pointy fangs. Compared to the Euro-vamps, Sweet is a wolf to their sheep.

And he knows it.

Between the Wild West and the Roaring Twenties, Sweet does turn sweeter. Or so it seems. He helps Pearl deal with the Old World European vampires running the studio and then mosy's on his way. Hints to his main weakness and unfinished business he's hankering to tidy up are left with us to roll our own on until we meet up with him again along Snyder and King's revitalizing vampire series trail.

I've got dibs on Brad Pitt playing Sweet in the big screen version.

A courtesy copy of American Vampire: Volume 1 was received for this review.

Going to need to break my vampire hiatus and finally check this out.