« My Halloween: Too Much Horror Fiction | Main | Halloween Trick or Treaters Vintage Photograph »

My Halloween: Polka Haunt Us 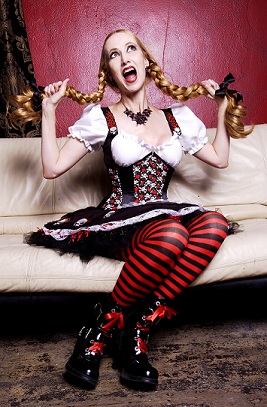 Five questions asked over a glowing Jack o'Lantern, under an Autumn moon obscured by passing clouds...in between mouthfuls of candy corn...Veronique Chevalier of Polka Haunt Us, haunts us with her Halloween...

Besides the opportunity to masquerade as a different character than the person I am in daily life, I love Halloween because it's a socially-acceptable way to celebrate our "Shadow Selves"- those dark portions of the collective consciousness that we try to keep at bay most of the time.

Because our society is so "Darkness Phobic" for want of a better term, Halloween is a welcome safety valve for many people to poke fun at, and with, the things that most folks would rather not have to address directly. And of course, it gives humans a ritual focal point for harvest season. Even though we are no longer an agrarian-based culture, we still seem to have a collective need to celebrate the change of seasons.

I love performing at Halloween time as my “Hellga The Devil's Beer Maid” character, because it's one of the rare occasions when I get a chance to interact with people of all ages, be it private parties, Harvest Festivals, Halloween Carnivals, etc. Last year I performed at an all-ages punk show, and the kids accepted me as one of their own!

As someone who didn't replicate, I am saddened that our society is so compartmentalized- families with kids interact only with other families and their offspring; and the singles mingle with others in similar situations, and the old folks are all warehoused together, off to the side. Dressing up in costume removes some of the barriers that separate us during the rest of the year.

I simultaneously LOVE & LOATHE Martha Stewart's annual Halloween How-to Guide. On the one hand, the craft, decor and food are always tasteful, interesting, and I think very well- presented. Plenty of juicy ideas to sink one's fangs into. But on the other hand, everything depicted in those thick, glossy pages, is so perfect down to the nth degree, that I actually end up feeling utterly inadequate. For one thing, it makes me feel like a social outcast, since I don't have a large circle of family and 'fiends' for whom to decorate, and entertain.

But then even if I did, I'm sure I'd also feel like an abysmal failure, because if I was going to be holding social events around the holiday, how in the world could someone with kids, and a job, (or two), find the time to carefully cut and paste all those infinitesimal little party-favor/place card doo-hickeys together; to cook and bake, plus create just the proper tableau to display said foodstuffs; whilst ensuring one's children and pets don't wreck the house before the guests even arrive; not to mention finding the time to construct a 1 to 10 scale replica of Sedlec Ossuary in the front yard; to clean up afterwards (making sure that no recyclables are inadvertently tossed in the Green Waste Only bin; as well as peeling all the kids off the ceiling and into bed (after they've collectively downed enough carbs to power the entire cast and crew of "The Expendables" for the filming of both the original and all 7 sequels); and then find time for oneself to at last seek solace in sleep as well?

So, every year, old wounds, for which Martha is responsible, are re-opened, because I find myself duped again into buying yet another of her crisply-bound periodicals of seasonal self-delusion.

The reason she can keep churning out these deceptive handbooks of impossible-to-achieve homespun craftitude is because she has a standing army of artsy minions that do her bidding, month in and month out, for every damned holiday of the year, while she rakes in the dough from my fellow rubes and I, who have a weak spot for the concept of domestic reality that can only exist for her, Oprah Winfrey & the other Billionaire Ladies-(Who-Show-Arabian-Stallions-and-Pedigreed-French-Bulldogs)-That-Lunch.

When was your very first Halloween, the one where *you really knew* it was Halloween, and how was it?

My mother, being of French Parisian upbringing, did not grow up with Halloween, so she of course had nothing but disdain for what she felt was rude behaviour of children "begging" for food from others. Why couldn't their own damned parents give them goodies, and leave the neighbors in peace? By virtue of her enduring marriage to my father, who made his career in The Air Force, she was eventually inoculated into the American way of Halloween after living on US Military installations after a few years.

By the time I was five, I was clamoring to be allowed to dress up and go trick or treating with my friends (despite her best efforts to keep me sheltered from the barbaric ways of Americans).

So, she eventually relented, but insisted that I was not to be seen wearing any of those low-brow, mass-produced costumes. Oh no! Only a couture creation for her child. To her credit, she is a fabulous fashion designer (but of course!) but the Marie Antoinette costume was so alien to anything that my friends were wearing that I was aghast and refused to be seen in public in it.

So, in the end, I dutifully donned the dress (which in hindsight was lovely), but I refused to wear the wig she'd actually very cleverly created with one of her cast off cloche hats and much lamb's wool.

I sat for a photo (inside our house), which she later used as a guide for creating an oil painting of me, which still hangs to this day in her home. From the neck down, is a lovely 17th century ensemble and from the neck up is a rather sullen little girl with a short blond pixie hair do. (The length of my hair was also the subject of many mother-daughter power struggles. We had our fair share of Napoleonic duels over the ages, she and I...)

As for trick or treating that year, some of my buddies smuggled portions of their own candy stashes to me, so at least my teeth didn't deprive any dentists of grist for their trade.

Q: You conceptualized and produced a recording entitled "Polka Haunt Us: A Spook-tacular Compilation" based on ghostly lore from around the world, and coined the term "Gothic Polka" to describe the genre. What induced you to do such an unusual project?

A: Well, just about every musician, at one time or another, gets the bright idea to make a Christmas record for any number of reasons, such as having a guaranteed item for everyone on his or her gift list; or because they just know that their version of "Jingle Bells" will surely become the benchmark by which all others will pale in comparison; or maybe they figure they'll have a shot at selling a few CD's to shoppers desperate for last-minute, one-size-fits-all gifts.

So, since I know without a doubt, the world has an over-abundance of Xmess recordings, most of which had no business being recorded in the first place, I turned my attentions to what is steadily become the most popular holiday in the US, and the one which has always been my favorite (once I recovered from the trauma of my my ill-fated turn as Marie Antoinette)- Halloween.

I felt that the world did not have nearly enough family-'fiend'-ly Halloween music, so I got the idea for collecting an array of international folklore to take listeners on a spooky journey around the world. The Polka concept was added since I wanted to be able to submit the album for Grammy consideration, and it seemed to me the only category in which I'd have a snowball's chance in Hell of even getting on the ballot for, was Polka.

I also had heard rumors among polka folk, that the category was about to be abolished, so that clinched it for me. Plus, I love accordion music, which has been enjoying a renaissance by the young people who grew up hearing “Weird” Al on the Dr. Demento Show. I am pleased to add that my track “The Beer Hall In Hell” from “Polka Haunt Us” was also played by the Good Doctor as well, before he discontinued his terrestrial radio show, and began streaming his music dementia exclusively via Internet.

Well, the record did make it onto the Official Grammy Ballot the year it was released, and the following year, the category was indeed folded into "World Music". So, if I want to make another Halloween recording for Grammy consideration in one of the less-competitive categories, I'm going to have to invent Gothic Hawaiian, or Gothic Native American, (or possibly even Gothic Conjunto if I want to try for a Latin Grammy)…

I am sure if anyone is up to the task, it would be moi! Merci boo-coup for inviting moi to participate in your interview, and Happy Hauntings to one and all!

Thank you for a good and fun interview with Veronique. But off course with this talented lady everything is fun.

Halloween has got to be my favorite holiday...