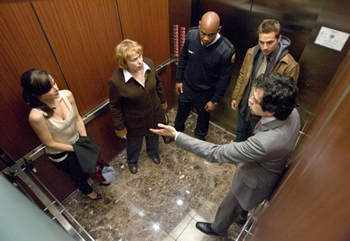 John Erick Dowdle (Quarantine) locks us in a stranded elevator with five strangers and the Prince of Darkness in Devil, a tidy traditional horror movie that works well by balancing its terror with its Ten Little Indians' mystery: Who are these five people? Is one of them the Devil? Why are they being tormented?

It is a minimal premise delivered with a 1970s tempo and plotline, propelled less by gory acrobatics and more by the increasing antagonisms within the tight space as Ramirez (Jacob Vargus), a religious and superstitious security guard, whose mother told him stories of how the Devil would appear unexpectedly in odd places to claim souls, is the first one to recognize what's happening.

Brian Nelson's (30 Days of Night) screenplay, based on a story by M. Night Shyamalan, evenly mixes the interplay across the helpless people inside the elevator with the equally helpless rescuers outside, led by Detective Bowden (Chris Messina). Dowdle and Nelson underplay the drama to keep Devil from becoming pretentiously silly and preachy, dropping the pedantic sledgehammer Shyamalan has been pounding us with in his more recent efforts.

Ben (Bokeem Woodbine), Tony (Logan Marshall-Green), Sarah (Bojana Novakovic), Jane (Jenny O'Hara), and Vincent (Geoffrey Arend) are trapped between floors when Elevator 6 goes into inspection mode. The inocuous muzak warms tempers and attitudes as time passes while the engineer finds out why. Vince, the swarmy mattress salesman tries to convince Sarah she needs a good night's sleep on a new mattress. Ben, the temporary security guard, doesn't like to be confined: as kids, his brother locked him in a trunk for hours. Jane, the irritating woman with a can of mace from the 1980s, jangles nerves. Increasing everyone's frustration is the one-way communication with the outside world: they can hear the security guards but the guards can only see them, and the camera in the elevator is not very good for reading lips.

Ramirez's opening narration explains what to look for when the Devil comes calling, and when a suicide leads the police to 333 Locust Street, he's the only one--he even makes sure he's right by dropping a slice of toast with jelly to see how it lands--who knows it won't end well. Detective Bowden, who shares an important connection, unknowingly, with one of the five stranded passengers, identifies each person, giving us clues as to why they're in their current predicament, and alternate reasons for what's happening; but the alternatives are for Bowden to investigate, not us: the Devil is in the details and remains so as he takes souls, one by one, when the lights go out.

I hope the heavy marketing campaign that pegged Devil as an M. Night Shyamalan movie does not deter its potential audience: given his recent movies, it might. Devil is a thoughtful, low-throttle horror that easily avoids inciting snide remarks about going-down in an elevator.

A much more positive response than the last blog review I read about Devil. The premise really interests me and seems like the kind of low-key setting that would let a Shyamalan story shine.

Thanks for this review--I think I know the kind of style and pacing that you are referring to, which I love about 70s movies, so I'm really excited to see this one now. And I'm glad there's not any preachiness--yuck!