My Halloween: Fascination With Fear 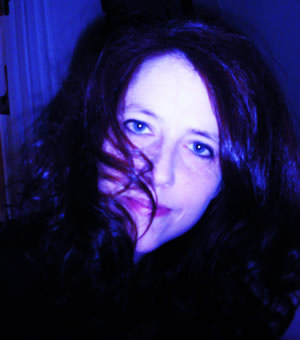 Five questions asked over a glowing Jack o'Lantern, under an Autumn moon obscured by passing clouds...in between mouthfuls of candy corn...with Christine of Fascination With Fear who tells us what else holds her fascination...

Halloween is my favorite day of the year.  Has been since I was small enough to know what a favorite is.  It's rather funny to think I love the holiday so much when I'm not really a big fan of kids (that alone should get me burned at the stake).  But it is such a fabulous time of the year.  In addition, October is my favorite month, and it's just capped off by the holiday.  Over the years, I've always tried to take off work on October 31st, and sometimes November 1st as well - as the horror movies run late into the night.

Well I might piss the parents off here, but I don't have kids - so my Halloween is sans children.  Though I can very much appreciate kids in their costumes wandering aimlessly around my small town - I remember when I was a kid how much it meant to me.   But my perfect Halloween would consist of driving up to our cabin in the woods about an hour north of home (the one we lovingly dubbed the Evil Dead cabin, due to its similar look).  We'd have to take along our jack-o-lantern, cause that's only right.  I'd sit outside and read in the crisp fall air so I could smell the dead leaves and feel the last of the autumn sunshine, then I'd have the hubby start a campfire and we'd hang out around that toasting up some marshmallows and such.  Then of course, it would be horror movie central for the rest of the evening, capped off by a trip to the outhouse in the dead of night right at the edge of the (Blair Witch) woods. 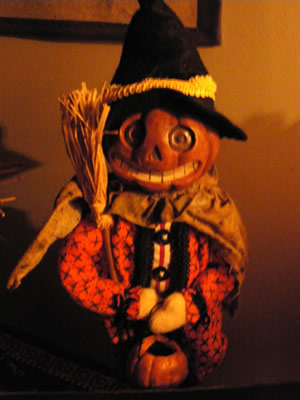 My movie (DVD/VHS) collection would have to be my biggest horror/Halloween collection, but I do have a ton of Halloween decor. As I get older I cringe at the thought of putting it all away in November, so I haven't been putting out quite as much. But I love antique looking Halloween collectibles - things that look decades old. Oh, and I collect witches.  Lots of them.

I grew up in western Pennsylvania, so sometimes it can actually snow around Halloween. I recall one year when I was quite young and wanting to be a veterinarian for Halloween (you know, scrubs and a stuffed dog -real inspired), but it turned out to be like, thirty degrees outside. Hence, my hunter costume. Yep, camo and a shotgun.  Unloaded of course, but this was back in the day when a seven year old could tote a gun around town without getting thrown in juvie. Oh well, that big coat held a lot of extra candy.

Q: Why doesn't my town hold Trick-or-Treat AT NIGHT???

A: I've been asking myself that question for over thirty years.  Runs in my mind when I was small, we trick-or-treated at night.  Folks with the porch light on were handing out candy, if the house was dark you steered clear (or threw corn at it later on). Later in my teens, my town changed it to daylight only. From around noon till 4pm. And no, my town is not full of crime.  At all.  There is no real reason why kids can't trick-or-treat at night here.  It makes me so mad when I think about it, them taking away our fun and making kids even more afraid of the dark than usual.

Posted at 10:00 AM in Halloween (Memories) | Permalink