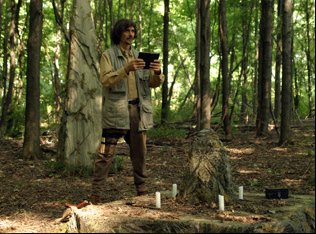 In director Edward Douglas' The Dead Matter, the power of a scarab-shaped amulet brings back the dead. For Vellich (Andrew Divoff), a vampire who desires to control the dead, the amulet means power; for Gretchen (Sean Serino), it's like the monkey's paw that grants wishes, and her one wish is to bring her dead brother back to life. Two vampire hunters, McCallister (Jason Carter ofBabylon 5) and Pym (Bryan Van Camp get caught in the middle of these desires.

Vellich is an old world vampire, more traditional in his ways, with flowing long white hair and a strong taste for human blood. He's not the Twilight kind (okay, except for the flowing long hair) and his patience is short, demonstrated when he rips the jaw off another vampire's face. Nice touches of gore like this are added here and there, and, possibly due to the presence of Tom Savini (he plays the vampiric druglord Sebed) they blend with the action instead of the action stopping to admire them. A few CGI effects are also added, but at this budget they are at the level of an 80s to 90s movie's effects. This doesn't hurt The Dead Matter, but to Tony Demci's pacing and plot that pits vampires Sebed and Vellich against each other for possession of the amulet, complicated by sibling love mixed with guilt: Gretchen blames herself for her brother's death. 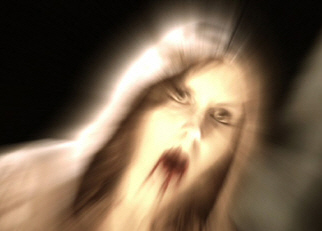 Eerie spook show CGI effects enhance a late night seance in the forest when Gretchen and her wiccan girlfriend Jill (C. B. Spencer) convince their skeptical boyfriends to join them. Gretchen  hopes to contact her brother. She contacts something else as the amulet beckons from where it was left hidden from Vellich by a dying Pym. While McCallister searches for it, Gretchen discovers it can raise the dead when Pym's ambulatory body shows up unexpectedly. He's more like a traditional zombie, not the brain-eating or body parts kind. Souless, unable to feel or think, or even move without Gretchen directing him through the amulet, he becomes her surrogate brother. She has him 'eating' ice cream and doing other things she and her brother enjoyed doing, like riding a carousel. It's filmed not so much tongue in cheek, but with a macabre sense of humor and sadness. She thinks she's found a way to reunite with her brother, but Pym's bodily shell is telling her otherwise.

Her friends try to persuade her to give up the amulet and her ultimate goal, but she hangs an air freshener around Pym's neck, tidies him up a bit, and continues working on raising her brother from the grave. Serino's acting falls short during all this. She's too soft when she needs to be firm, and too rational when she needs to be irresponsible. Bryan Van Camp's Simon Garth-styled zombie is fun to watch and ironically gives life to her scenes with him. He simply is. No emotion, no motion unless asked for, no intellect; stillness that shows he's just an empty shell. His utter silence is creepy as hell. McCallister tracks the amulet to Gretchen, but so does Vellich. By this time, the scarab-shaped relic has become a part of her, and the demonic presence in the amulet takes over, calling the dead to it. Moody scenes of the dead rising and shambling to the summons are done with restraint, showing atmosphere over carnage. The climax brings everyone, living or dead, back to the forest. 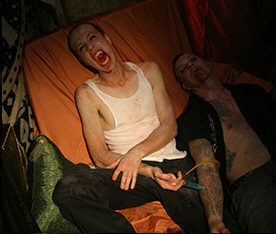 Carter dresses and acts the way you would expect a vampire hunter to, and Divoff as Vellich is vile enough to provide a sinister Gothic presence, aided by his abilities to turn into a dark cloud, or appear as someone else. Tom Savini's Sebed chews up the scenery with gusto. He pushes a drug that replaces a vampire's need for blood, but it's addictive. It's the new way, he tells Vellich. Maybe he's a fan of True Blood, too.

Count Gore De Vol has a cameo in a bizarre nightmare sequence. You won't recognize him without his makeup.

This straight to DVD 3-disc deluxe edition--the movie and two music discs, the soundtrack and Midnight Syndicate's best of compilation-- is a well thought out treat for Halloween, or really anytime the mood strikes you.

A copy of The Dead Matter was provided for this review.