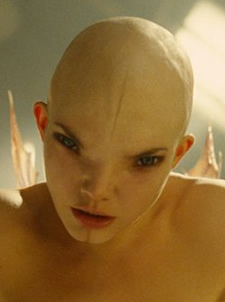 Zombos Says: Good (but should have been better)

The Frankenstein brothers had it easier back in the day: just rob a few graves, swap a brain or two, dodge the villagers, and they were good to go. For Elsa (Sarah Polley) and Clive (Adrien Brody), two scientists splicing genetic material for the pharmaceutical company funding them it's harder: they need to quickly come up with a profitable benefit from their work for the company's board of directors while avoiding using human DNA in the process to help. There's all that messy ethical, moral, legal, and congressional-folk just itching to light those political-torches falderol if they give into temptation and cut that corner by doing so. But temptation is the bread and butter of horror, of course, and giving in to it is where Splice begins.

The movie cuts some corners also. It's not quite a horror movie, though we do have a metamorphic monster; it's not quite a character study, though there are glimpses into Elsa's troubled family life; and it's not quite a panoply for all those ethical, philosophical, and legal issues waiting to pounce when manipulations, creations, and terminations of human substance are involved; though fragments of this triplet codon are to be found here. This leaves Splice's horror and dramatic genes only partially joined, spread apart by inadequate dialog (thankfully devoid of too much scientific jargon) and a story that neither emphasizes its philosophical dilemmas or craftily avoids them, nor terrorizes us with their details. 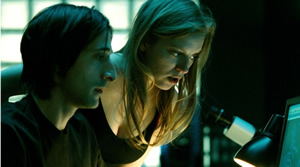 At Elsa's insistence, and in secret, she and Clive add Jane Doe DNA to their pink squishy blobs of cellular matter and produce a hybrid blob that grows into Dren (Delphine Chaneac), a sensual creature with a spiteful--and lethal--tail. Like the alluring Sil in Species, Dren is gorgeous, and she can live on land, breathe under water, and, surprisingly, given her aerodynamically-dinky wings, deftly fly. And she wields Scrabble tiles like a pro.

As Dren's development sequence carries her from successful experiment to needy child, and finally into a needy adult who wants more freedom, Elsa and Clive's own relationship strands unravel between them and their co-workers. This leads to an unexpected and implausible gender-switch (no one read the log book?) at an important press gathering soon punctuated by an exhilarating bloody red mess of blob chunks violently splattering across the first row of scrambling, horrified shareholders. Elsa and Clive, conveniently written not brilliant enough to connect the foreshadowing dots clearly shown to them, double their efforts to keep Dren out of sight while pursuing the needed genetic material to keep the company solvent.

Director Vincenzo Natali (he also co-wrote) arranges his imagery and scenes like Scrabble tiles, only he isn't as smart as Dren. He doesn't come up with involving or creative arrangements to express the complex moral and societal ambiguity Elsa and Clive are forced to deal with by their actions. Splicing horror code from familiar movies, he leaves out key sequences here that would have bridged Splice's development from B-movie status to something better.

I have disagree with you on Splice. It's the best horror film since 28 Days Later. I think it had just enough of its ethical dilemmas without losing sight of the fact that it is a monster movie. Also, it went for making people feel icky rather than scare them. See Adrien Brody commit bestiality and incest AT THE SAME TIME!