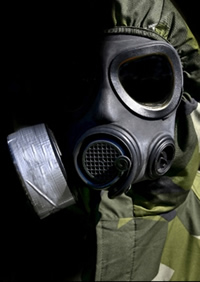 With the zombie well beginning to run dry of ideas, it's tough to come up with new angles to build around the gut-munching simplicity of the undead. Fast or slow, young or old, there's not much you can do with them beyond their insatiable appetite for flesh and sweet meats, and the duck and cover action it usually entails. While gimmicks abound, like dressing them up in Victorian finery and serving them up with tea and crumpets, you can only go so far before even they start looking long in the tooth and come up short on the drama.

One thematic darling of the zombie fiction set is to have a pandemic erupt sending citizens and politicos, civilians and military to hell in a designer handbasket. Usually blamed on terrorists or a military experiment gone horribly wrong, this virus hits the population hard and takes down everyone in its path. Queue the final curtain and much wailing and gnashing of teeth (on both living and dead sides of course).

In Tooth and Nail, Craig DiLouie follows the soldiers through the hell they must travel when New York City becomes a massive killing zone. His virus is the Hong Kong Lyssa, a variation that mutates into something more like a parasite than simply a nasty bug. His Mad Dogs-- what the people infected with the virus are called--act very much like extras from 28 Days Later, but in his claustrophobic urban battleground, with no Starbucks, Dunkin' Donuts, or even a 7-Eleven open to grab a coffee break and Twinkie, the platoons sent to protect the
population wind up needing protection from that population even more. This sets up the intriguing emotional, spiritual, and intellectual conflicts inherent in such a situation: how can the military fulfill its primary objective to protect a population that is devolving more and more, by the minute, into an enemy. It's a unique premise. DiLouie, unfortunately, does little with it.

The last book I read that handled present tense well was David Moody's Hater, which was also written from the 'questionable perspective' of the narrator. DiLouie writes Tooth and Nail in the present tense, but his stream of action from characters to places to thoughts becomes awkward and intrusive at times, and twice shifts unexpectedly into a first person narrative, leaving me wondering who's speaking. Piling on military jargon and dividing chapters between the various platoons, the scientists at the medical facility researching a cure, and the Tilden Middle School campaign gone sour, it's a hard go to remember which platoon was involved with what mission and where they were or were headed. I eventually lost track of which soldiers went with which platoon halfway into the story. The scientists were easier to follow because they were written with two-dimensional dialog and B-movie scientist-type temperaments.

DiLouie provides a list in the front of the novel that spells out the military abbreviations used; AG stands for "assistant gunner," and FPF is "final protective fire." But after paging back and forth a few times to find out what each abbreviation meant, I felt like I was back in college doing a term paper. I bet you don't know what SINCGAR* stands for? An odd use of brief subtitles for chapters and transitions within those chapters sticks out like a sore thumb in the reader's eye, either telegraphing key upcoming moments or jarring his narrative flow. They reminded me of those melodramatic blurbs on the Mars Attacks! trading cards, just not as effectively used here.

At the crux of the story are the soldiers and their mental anguish over dealing with Mad Dogs, potential Mad Dogs, and ignoring pleas for help from desperate New Yorkers while trying to stay alive. Their growing consternation, helplessness, and resignation to the inevitable breakdown in command center communications and conflicting goals leaves them spiritually and mentally handicapped, unable to cope with a rising death rate and their  lowering prospects for success. DiLouie almost succeeds in capturing this roller coaster of potential drama, but sacrifices the fast turns and sudden dips for repetitive action sequences involving platoons making their way to somewhere because of seemingly random orders, through streets filled with hordes of Mad Dogs. At times these sequences are engaging for us as much as the soldiers--DiLouie works hard to incorporate realistic military strategy into these battles--but in-between them the rest of the story lags behind, filled with good-soldier-does-his-duty-to-the-end-no-matter-what flippancy.

The virus itself transforms into a parasite well into the novel, although this sudden change in its propagation characteristics gives the impression DiLouie only thought of making it a parasite well into the novel. With no foreshadowing, the revelation carries little dramatic impact when it appears and fails to provide much dramatic direction afterwards (read The Andromeda Strain and you will understand what I mean). His scientists are too busy doing B-movie duck and cover gyrations when their medical facility is compromised to appreciate the twist, leaving only one of them to convey the sudden discovery to a disintegrating military establishment.

In one promising plot thread that DiLouie brings up, but annoyingly leaves dangling, a soldier goes AWOL after a pretty college girl entices him to help her. What he eventually finds is a bunch of college kids who want to steal his weapons so they can hop over to New Jersey with a better chance of survival. They even ask the soldier to join them, reasoning he's the best one to handle the fire power. He bluntly says no, they leave with his guns, and this fetching storyline dies as quickly as it began.

I can't help but wonder how the college kids made out.

A digital copy of Tooth and Nail was provided for this review.