Comic Book Review: I, Zombie 1 Dead to the World 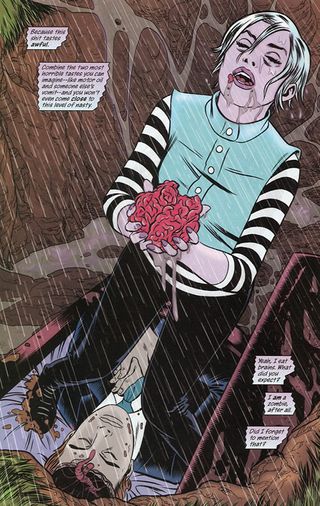 Combine the two most horrible tastes you can imagine--like motor oil and someone else's vomit--and you won't even come close to this level of nasty. Yeah, I eat brains. (Gwen in I, Zombie, Issue 1)

I, Zombie from Vertigo is an urban fantasy set in Eugene, Oregon, a town very much like Archie Comics' Riverdale. Instead of Jughead, Betty, and Veronica, however, the grave-digging Gwendolyn Dylan has friends like  Ellie, a Go-Go Dancer ghost with a beehive hairdo, and Scott, a were-terrier boyfriend with puppy-love eyes. The gang likes to hang out at Dixie's Firehouse, the local malt shop and diner.

When not at Dixie's, Gwen digs graves at the Green Pastures Cemetery, which boasts their naturally wholesome methods of interment. Gwen's dirt-shoveling skills come in handy because she's a 20-something zombie who needs to chow down on a mass of gray cells every month to keep from turning into a less attractive and stinkier one. The catch is that when she eats a recently interred person's brain, she experiences the memories, pleasure, anguish, and desires the person left behind before shuffling off to points unknown. This time around, that shuffling off involves murder.

There's a lot of kitschy-cute weirdness crammed into this first issue: a mysterious corporation concerned about the surge in permanent residents at Green Pastures Cemetery; a former boyfriend Gwen anxiously avoids; the question of who murdered her latest dinner guest and why; and paintball vampires prowling around. Introductions are fast and brief in this ambitious issue, leaving me with anticipation for the next issue and hoping it doesn't fall flat under its own weighty cuteness. Michael Allred's artwork melds with the odd characters and their peculiar talents well enough to keep the tone balanced for the light and dark drama-kitsch writer Chris Roberson is aiming for.

DC Comics sent me a courtesy copy for this review.

I've always loved Allred's work and the writing, as quoted above, sound impeccably intelligent. I can't wait to check this one out.