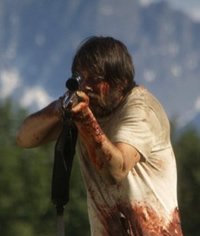 Once again, Ms. Catsoulis' review is perplexing to me. Interesting, but very perplexing. (Zombos)

Twice I started watching Robert Saitzyk's thriller Godspeed and twice I stopped at the same scene in the movie. I wondered why. It's when faith healer Charlie Shepard (Joseph McKelheer) and Sarah Roberts (Courtney Halverson) have awkwardly met and each wants the other to go in a different direction, which is either to find something or to lose something, or maybe both. Intensity should be radiating from them but it doesn't and I couldn't pin down why. Maybe it's Saitzyk's direction, which lingers too long on scenes, trying to give them importance the story and its characters can't muster, or maybe it's McKelheer's struggle (he co-wrote with Saitzyk and Knauf) with overly contemplative dialog inadequate for fully expressing his struggle with his inner demons. There's a weightiness to Godspeed that doesn't add up given its story, and for a thriller--I wouldn't call Godspeed a horror movie--it never finds the intensity it needs to involve us, or justify its artsy spiritual despair spilling over into bloodshed at the beginning and the ending of the movie.

Given the beautiful but lonely vista of the Alaskan location, Saitzyk doesn't allow his tormentors or their tormented much interaction through metaphor or religious iconography with the wilderness surrounding them--and in them; instead, he fills the empty spaces with drawn out, self-conscious talkiness, where everyone moves hopelessly around a lot  pontificating on their desires and sins without making us feel they're sharing the burden with us. Neither are their actions embellished or even made insignificant by God's intrusive knack with nature all around them. This leaves the movie's underwhelming religious-poking bland to watch, forcing more of our attention on a weak story just not engrossing enough to hold it, which, given the soul-searching and ulterior motives abounding at its heart it should. Godspeed doesn't let us feel the philosophical ardor it so heavily tries to concern us with. 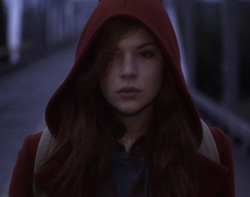 While Shepard's family is tastefully being killed, seen between glimpses of the serene aurora borealis lights and his tryst with a prostitute, the emotional impact of the murders falls flat. Moving too slowly, back and forth, between the lights, the murders, and the prostitute's consternation over his need for her when he has a beautiful wife at home, Saitzyk's monkish pacing dulls the intrinsic horror and, worse, fails to build momentum beyond Shepard's retreat into the wilderness.

We see him months later, all Grizzly Adams and living in a trailer home, when Sheriff Mitch (Ed Lauter) pays a visit to apprise him that nothing has been discovered concerning his family's murder. Mitch asks about his questionable past, the one that brought him to the small town. Saitzyk and McKelheer beat this scene to death while Mitch waits for Shepard to vent his frustration and anger. And vent it some more. At the local diner, Sarah finds him blocking out lines in his Bible with a Magic Marker. When she ventures closer, he explains what he's doing: he's blocking out the lies of God. Sarah needs him to return home with her so he can save her brother Luke (Cory Knauf) from himself. Luke hates Shepard. Luke wants to start his own little world of salvation for his followers. Too much time is spent listening to Luke preach to his followers and showing closeups of their faces as they intently pay attention.

Exactly what Shepard is retreating from is not fully explained. It's possible he really does have a gift buried in him for faith healing; but it's also possible he's a charlatan who really does want to heal the sick. Maybe he's a bit of both: a faith healer who's lost his gift for healing and wonders why God has forsaken him. Does he blame himself? Does he blame God?  His inner turmoil starts well before his wife and child are murdered, and his inability to heal has leached out to overwhelm Sarah and her brother.

The both of them are in a soul-searching freefall after the death of someone close and important to them. Both blame Shepard, but for different reasons. Sarah is drawn to him both romantically and spiritually. Luke is drawn to him but with a different reason. All three suffer from their inner demons, but given all of this inevitable tension from unfulfilled love, seething hatred, and constant religious questing, the monotone direction keeps it corked, the superficial story keeps it bottled up, and the acting keeps it on the shelf, never threatening to become more than something interesting to look at but not to partake in.

No other movie has caused me to think so much about what wasn't working. Earnest and good production filmmaking, yes; but overbearing seriousness hurts an already underdeveloped story. A deft touch, more varied pacing, and less ponderous scenes were needed here. The underlying plot is good, but the execution doesn't work for me, and, I think, good movie dynamics in general.

Very well put. This is the kind of review that made my decision for me seeing that I hadn't heard of this flick before.