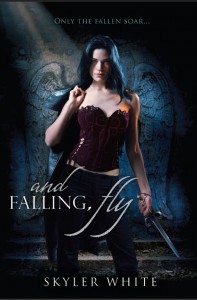 Dominic's voice is meltingly tender. "What if you're right? What if hope is the master of Hell? What if something in your own mind, in your own hopes, or fears, or ideas, is the cause of your suffering? What if you are not damned?"

Ambiguity and certainty abound in Skyler White's novel and Falling, fly, along with fallen angels turned vampires, a neuroscientist traumatized by his cycle of reincarnations, and an Irish Goth-punk hotel that is either Hell, Limbo, or a comfortable bed and breakfast for its guests. In words thought and spoken, her characters shift between first and third person narratives to dwell on the certainty of their fate and the ambiguity of their despair: continue living fettered by their assorted curses or dare to surmount them even if it means painful loss. But are they indeed cursed as they believe or are they living a delusion? That's the tantalizing conundrum White presents with her words as they blend mellifluously into scenes ripe with irreconcilable decadence, sex, and mythologically-based--and sanctioned--angst over what may or may not be real.

Expelled from Heaven, Olivia lives an urban fantasy life of vampirism and damnation. Unable to feel love or physical sensations, her only outlets for pleasure are the Quarries, special clubs where she and her sister vampires, and their willing initiates, can satiate their desires for bloodlust through the thrill of the hunt and the near-death experience, all moderated through credit card and signed agreements: never too much blood is taken, never too much hunt is given. Using tiny quill-like needles, razor sharp and promiscuously abundant, she takes her blood sparingly from unwitting donors, in minute doses, until the hunt frees her to relish in the bloodletting by using her indestructible fangs. But indestructible only if her quarry is fearful or desirous of her; and Dominic is very desirous of her.

A neuroscientist looking for a pill to assuage his memories of being reborn again and again, and all he's lost because of it, Dominic either suffers from delusions like Olivia, or he really is a reborn, a human damned to rebirth his soul in an endless cycle of reincarnation. Both Dominic and Olivia meet at the L'otel Matildes, an underground respice finem molded in the image of a netherworld residing deep under Ireland's more pedestrian terra firma. Odd guests abound, hosted by Gaehod, a kindly old soul who might insist his hotel is really Hell, but he certainly doesn't look or act like the Devil. Hell also isn't a Green-minded place with ball bearings positioned in such a way as to capture kinetic energy for recycling.

Alyx collapsed on the bed, a cascade of ball bearings harvesting the energy of his fall and noiselessly shunting it down through the floor. The hinges on the door, the feet of the desk chair, were all the same, rigged to recycle the momentum of every human motion.

Alyx is one of those odd guests. He latches onto Dominic right away, like a drowning person to a life vest. He wears a filthy bathrobe, wears outlandish, tinted goggles, and can't get his act, head, or anything else together. Alyx is curled into a ball under the couch Dominic sits on when they meet. Alyx lounges around a lot. He also thinks Gaehod brought Dominic back to the L'otel Matildes so he could help Alyx overcome his alcohol addition. But Dominic is more interested in Olivia and curing her; or will she cure him? Or are the answers they both seek as serpentine as those given by that snake living in the tree of knowledge in the hotel's subterranean garden.

Olivia's sister vampires do not want Dominic's cure, nor Olivia cured, because that would mean closing the hotel for good. But Gaehod was already contemplating closing his oasis for the damned though he's is not sure why. And the chemical cure Dominic provides may free Olivia, but doom him. Gaehod may hold the ultimate answer as to what is truly happening, but who, or what, or when is he?

and Falling, fly is both frustrating and beguiling. It is romance fiction with a finely twined around skein of duplicitous fantasy. But who's fantasy is it? Skyler White is not really telling, and neither is Gaehod or that confounding snake. Much like the ambivalence caused by the enticements between Heaven and Hell, you will either love White's playing between the lines or hate it. Just remember both places have their charms depending on what you're looking for.