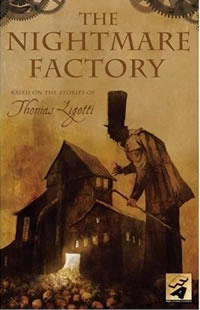 Shhh. Listen. That is a furtive step creaking up the basement stairs. Hold your breath. That is a shadow crouching in the corner of the room, and every other room you enter. Breathe in. That is the briny smell of fish scales and water-logged wood, and freshly turned earth filled with bloated worms, and moldering leather-bound volumes crammed onto drooping shelves. Now look. Those crumbling facades of edifice and sanity, cracking and peeling in the mirror behind you, are yours. And yours alone.

Welcome to the eerie world of Thomas Ligotti, an author who is either highly praised or mostly ignored by readers of the horrific, whose stories are adapted in these two volumes from Fox Atomic Comics. Somewhat Lovecraftian in intent, partially E. F. Bleiler-- with a tincture of Robert Aickman--in portent, Ligotti's stories are incessantly bleak and eldritch and filled with uncanny events confronting his displaced, misplaced, and psychically-debased characters. Images of festively-clothed clowns and harlequins, ancient alien things with grotesque appendages, and arcane horrors waiting patiently at your doorstep occupy his imagination. And now yours.

Reading Ligotti's words, you always enter the story in the middle and work around to the edges of beginning and ending, leaving you very much like the little rat nibbling at a large wheel of cheese: feeling anxious because there is always more just out of reach and desiring it badly. This is neither a bad or good thing. It is simply Thomas Ligotti at work.

In volume one, the nightmares include a small town's festival involving clowns and those that seem like clowns, a sanitarium that was better left standing than taken down, an intermezzo with a mannikin, and an artist's brush with the mysterious Teatro Grotessco. Each tale is drawn by a different artist with relish and Ligotti provides the introductions. The stories are adapted by Joe Harris and Stuart Moore, and capture the anxiety, paranoia, and weirdness of Ligotti's temperament. Dr. Locrian's Asylum is the most unsettling in illustration and tone, and touches at the ghostly with an M. R. James' spookiness. Interestingly, the first two stories are drawn using a black-bordered background, and the last two stories use a white-bordered one.

Gas Station Carnivals, The Clown Puppet, The Chymist, and The Sect of the Idiot are adapted in volume two. The questionable emotional stability of the narrators in the first two stories leaves you with a sense of dread and uncertainty, while the certainty in purpose expressed in the last two stories' narrators leaves you with a sense of fear, of out-of-your-control-evil happening, again and again. The life-sized puppet-clown in The Clown Puppet floats silently in the back of Vizniak's pharmacy, looking for a prescription that may be difficult to fill. Bill Siekiewicz's arresting panels imbue the absurdity and malevolence of this apparition with vivid terror. The impossible remembrance in Gas Station Carnivals hints not only of a troubled memory, but of a troublesome future, especially with it's story within a story framework. Ligotti introduces each story again, but more like he is thinking out loud with his ruminations rather than a fact-laden rundown of the story's provenance. As in volume one, these ruminations, on the theme permeating each story, gives us a peak into Ligotti's fears, and subsequently, those of his characters about to experience the uncanny. It is here in volume two that the sense of being in the middle of something far more sinister and dangerous than imagined, or of having walked in, unwelcome, on a private conversation is strongest.

In all likelihood, Ligotti's writing stems from an inhibition to take his assigned medications in a timely fashion. Reading these tales, you may find a need for medication also, if only to not fear brightly-dressed clowns, and to be able to shake away the unease when all alone in those dark, quiet moments.

Critical analyses of Ligotti's work can be found in S. T. Joshi's book The Modern Weird Tale (2001) as well as in a critical anthology assembled by Darrell Schweitzer, a fan of Ligotti.

This sounds like an incredible collection of stories. Looking forward to hunting these two volumes down.