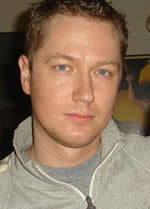 In this installment, Matt from Chuck Norris Ate My Baby blames his mom for all the horror.

I think I can blame my mother for indirectly pointing me in the direction of horror films and cult cinema. She wasn't a huge horror fan by any stretch, but she loved movies like Halloween, Jaws, and War of the Worlds etc...and some of my fondest memories are of us watching all of these films and others together on TV. She would wax nostalgic and tell me tales of when she went to see Jaws in the theaters and how there was a line around the block, or how people would freak out around her while viewing The Exorcist when she saw it in theaters. All of that stuff was intriguing to me as was the mystery of scary movies.

No time period could have been a better fit than hitting my pre-teen years in the late 80's and the amount of awesome genre television there was to be seen was plain magnificent. I look back on my time spent in front of the TV, with the glow of the screen reflecting on my widened influential eyes, as I watched all of the great horror programming, from Saturday Nightmares and Tales From the Darkside, to Commander USA and His Groovy Movies and USA Up All Night. I even was a member of the Commander’s fan club and more than once, with black magic marker, drew lefty on my right hand - just as the Commander did with his cigar. My love for the genre became an obsession - one of the highlights of my youth was watching the short run TV series Shadow Theater, hosted by Robert Englund. This is were I really learned about a whole lotta movies and it was where I was introduced to Special Make-Up Effects with spotlights on KNB and Steve Johnson.

I would *ahem* "acquire" liquid latex from any store that sold it during Halloween time, I would then make my own fake blood (A recipe I still use to this very day) and make up my friends and myself with wounds, only to go down to the local comic shop and trick whomever was working into believing that we were bit by dogs! They believed it, even though the wounds were in the exact same place on each of us! I was obsessed by this point - FX, Horror, and Heavy Metal were the way I lived and as I slowly moved from my normal upstairs bedroom, to completely take over the refinished "family room" in the basement - I had a domain all to myself, complete with a VCR and a 32' inch TV all at the prime age of thirteen!

The very same mother whom had led me down this path thought I was probably going to be a serial killer with "my" basement all decked out from top to bottom with horror posters and crap taken out of Fango magazine (which at the time still had the posters in the magazines). Plus, listening to shit like Suicidal Tendencies and D.R.I. didn't help her feelings any! I constantly watched any horror movie that was on TV and with a VCR handy, I taped all of them. I must have watched Cronenberg's The Fly 200 times in my early teenage years! That, on top of the local video store, complete with all the horror fixings, my life had never been more awesome!

Over the years, I fell in love with all types of oddball genres as my taste and openness to different types of film grew with each passing year. Watching Bruce Lee and Chuck Norris movies, along with Kung Fu Theater evolved into a lot of my love for Asian and Action cinema. My love for horror left the states to explore different countries and what brands of terror they had to offer my eager senses. This still goes on to this very day as I try to take in as much as I possibly can in terms of new cinema and what there is to be found in the dark corners of what celluloid has to offer.

Fast forward to the big turning point in my life and the reason I am here today. Back in '06 I fell very ill with end-stage renal disease and had to spend four hours a day, four days a week, hooked up to a dialysis machine. It fucking sucked balls and was incredibly long and boring with only basic cable to watch on the provided TVs. I had recently started listening to a ton of movie podcasts right before these events and they ended up coming in very handy in time wasting while going through the grueling days spent at the dialysis center. To make a wicked long story short, I received a kidney transplant back in November of last year and thanks to the unselfish love of my life, I was given a new lease on life.

I continued to listen to movie podcasts after these events and through this alternative way of consuming movie knowledge, I met the people behind Paracinema Magazine, who back in March, asked if I wanted to write for their blog. I had recently considered doing a blog of my own, but didn't think too much about it; however, as soon as they asked, I was ecstatic about the prospect of writing about the things I loved. I was a little intimidated about the entire thing at first, mostly because my grammar and spelling are terrible, and what if I completely sucked (notice I said completely)? On I trucked and I started doing a movie review about once a week and that turned into two, then three, then four times a week and I was loving it!

After doing that for a few months, I was at the computer eating a bowl of cereal late one night and I had thought about seeing how easy it would be to start my own blog (cause I'm computer illiterate). So I started messing around and when it came to a name, I quickly thought..."How about, Chuck Norris Ate My Cereal?" Within ten seconds, I thought..."Better yet, Chuck Norris Ate My Baby!" And it was instantly set in stone. Over the last five months doing CNAMB, I have been rewarded with meeting a slew of great horror and film fans, many of whom have their own great blogs and as CNAMB evolved, I found a great way to learn more about the movies that I love, by writing about them.

When I write about a particular film, certain things come out thematically as I write about them - things I had not thought of before sitting down to do so. This may be the most rewarding aspect as the satisfaction of having some thought, theory, or character come to fruition as I type is more than rewarding and gives me a more in-depth understanding of the movies I am watching on a day-to-day basis. I truly love doing what I do and the fact that anyone actually reads what I write makes me a very happy man.

Thanks for the kind words everyone, you are all invited for ice cream back at mu place!

Thanks so much for including my blog and asking me to do this, John!

And thanks for the kind words from Pax and Rev, two bloggers I completely adore!

I'm not surprised that Matt and I have similar up bringings. He's almost as weird as me...okay he's even more weird. Matt rules, CNAMB rules--'nuff said.

WOW! I've been a big fan of Matt's since I first stumbled upon his blog a few months back - but to know about his personal life, and medical struggles...well, just makes me respect him even more.