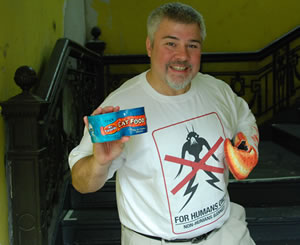 In this installment, Paul Castiglia from Scared Silly: Classic Hollywood Horror-Comedies tells us why he finds so much humor in all that horror.


The process of me becoming a “monster kid” turned out to be a lifelong affair. There were several factors that led to my love of horror movies in general and horror-comedies in particular, and by the time those influences merged together I became that “monster kid.”

Well, to be more precise, that “monster man-boy.” I’ve never completely grown up, and I don’t plan to, either. I have no middle name, but if I did, it might as well be Pan. That’s not the only caveat. When I say “factors” I really mean TV. And when I say TV, I mean movies, TV shows and cartoons in particular.

I was a child in the 1970s, when movies and TV shows from past decades were routinely rerun, especially in the tri-state area. I grew up watching the classic comedians on TV, particularly Laurel & Hardy and Abbott & Costello; and I grew up watching a lot of cartoons.

Initially, I was deathly afraid of the monsters. The intro’s to Chiller Theater, Fright Night, and other monster movie broadcasts were avoided like the plague, and if I did happen to see part of one, or a commercial for a first-run horror movie, that was enough to inspire nightmares through the night for me. 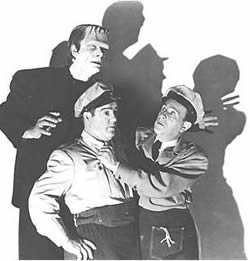 It didn’t end there, however. Seemingly innocuous characters like Herman and The Joker from Batman sent me up the 2 steps of stairs from the living room to the kitchen screaming; likewise for those times when Abbott & Costello meet the Frankenstein Monster, the Mummy, and Mr. Hyde. I hid behind the kitchen doorway until all these boogeymen left the screen.

This phase didn’t last too long as ultimately I embraced the humor in The Munsters and The Addams Family and the Abbott & Costello “Meet” movies. I became a fan of the silly monsters. Before too long I was digging cartoons featuring Milton the Monster and the Groovie Goolies, and enjoying live-action “kids shows” like the Hilarious House of Frightenstein and the original Ghostbusters show that re-teamed F-Troop’s Larry Storch and Forrest Tucker as paranormal investigators aided by Tracy the gorilla.

My first “real scary” monster movie may have been Destroy All Monsters. I remember being on vacation somewhere with my parents and I had seen commercials for this monster rally of giant kaiju creatures from . Imagine that--I was going to make my parents sit through this in a hotel room somewhere while on our vacation! Honestly, I can’t recall whether I watched it or not. But either way, the idea was firmly planted in my head to finally graduate from the “funny” to the all-out scary stuff. 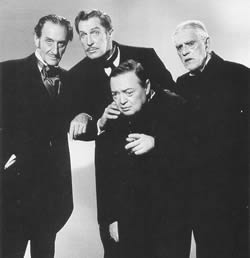 It still took some time for me to catch up. It wasn’t until high school and college that I started sampling all sorts of creature features. My tastes ran the gamut: I enjoyed the Universal Monster classics; the atomic age giant insects and martian movies; the aforementioned Japanese behemoth flicks; the z-grade films of Ed Wood and his ilk; and the delightful offerings of the inimitable Vincent Price.

Along the way, I realized two things: that Vincent Price was one of the coolest actors that ever lived, and that most of the Marvel Comics I grew up reading were heavily influenced by the Universal Studios Monsters.

What can I say about Vincent? As is often reported, he could make patently ridiculous dialogue seem believable. That is key to putting some of these films over. Whether it’s the exploitative gimmick films of William Castle like The Tingler or the art deco black comedy of The Abominable Dr. Phibes, Price makes it all palatable. And delightful. In my opinion, no one else could have made The Tingler work--you watch the film now on DVD without the benefit of the original theatrical gimmicks and it still plays because of Vincent. Likewise, could you have been scared of, laughed at, and felt sorry for any other actor as much as you do for Vincent as Dr. Phibes?

As for the Universal Monsters, when I finally watched and paid careful attention to the Frankenstein Monster and the Wolf Man, something clicked. These were the original Incredible Hulk and Wolverine from X-Men; surely Stan Lee and his fellow creators at Marvel Comics tapped into the idea of a sympathetic, misunderstood creature who was an outcast through circumstance, not by choice. As a kid who grew up with superheroes and comic books this was a revelation. Add the acting, sets, effects and cinematography--has any horror movie ever looked as good as The Bride of Frankenstein? And sometimes you got one of the greatest scripts of all time to go along with the visuals--again, The Bride of Frankenstein. 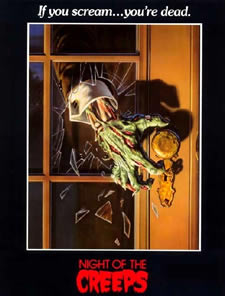 I had the good fortune to be in high school and college in the 1980s as well, the decade I consider the last really good decade for horror; before the films turned completely nihilistic and bleak. There was still humor to be found in the ‘80s offerings, even the all-out splatterfests, and it was refreshing. How much more entertaining can a film get than Fred Dekker’s Night of the Creeps?

In the last 15 years I’ve had the opportunity to see a great variety of films in the horror or related genres that I had previously never seen. It’s only in the last few years that I’ve had a chance to sample Val Lewton’s films, Ulmer’s Black Cat, and Tourneur’s Curse of the Demon.

I also have had some great opportunities in my professional life to deal with the lighter side of horror, contributing a chapter on Vincent Price’s horror-comedies for a book of essays on Price’s films, writing the Archie’s Weird Mysteries comic book series, and my Scared Silly blog, among others.

In the end, the horror-comedies are my favorites because comedy is my favorite. Laurel & Hardy, Abbott & Costello, The Three Stooges and their ilk are all in my blood. I always enjoyed seeing classic movie clowns get mixed up in haunted house scenarios and meeting monsters and mummies. There is that fine line between laughter and screaming in fear that these films tread, and while written off by many, I think there is real genius to be found in the horror-comedy genre. Simply put, I enjoy being “scared silly!”