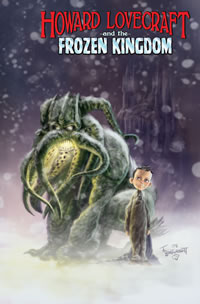 Zombos Says: Good (but is it Lovecraft?)

Blasphemy? Heresy? Bruce Brown and Renzo Podesta are treading very thin ice by making the anglophilic cosmic horror of Howard Phillips Lovecraft palatable for kids in the graphic novel Howard Lovecraft and the Frozen Kingdom. Or perhaps, by their adolescent-themed story based on Lovecraft's Mythos they may instill a fresh appreciation of those eldritch horrors that have become the first base and potent home run in much of horror fiction? Perhaps. But missing in the atmosphere created by their words and illustrations are the Gothic Noir and Rococo stylings--the stiffly starched shirt, rumpled cuffs verbiage Lovecraft is either praised or damned, but always noted for.

Drawing on Lovecraft's own tragic childhood, young Howard, in the company of his mom, pays a visit to Butler Sanitarium to see his raving mad dad. His father comes out of delirium long enough to implore Howard not to read that book, you know, the quintessential one that keeps getting every acolyte, neophyte, and unfortunate slub stepping into Lovecraft-land into terrible trouble. Here, it is his father's hand-written journal, containing the fruits of his occult explorations. Howard's mom, ironically, dumps that book into his little hands that same night for some bedtime reading enjoyment. 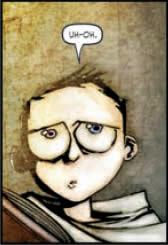 With widening eyes--Podesta's manga-inspired expressions for little Howard are charming--Howard turns page after page, eventually saying out loud what he should not give voice to. The spell he speaks opens a dimensional gate leading to R'lyeh, an ice-bound kingdom populated by children, who see the boy's arrival as a sign of their salvation from the curse of Dagon.

Howard meets a Deep One who wants to eat him at first, thinking he is a Jinn, but winds up joining him instead on his quest to learn more about the place he's found himself wandering in. Howard names his new aquatic acquaintance Spot since he cannot pronounce the creature's real name, which starts with Thu Thu.

At this point I have a bone or two to pick clean regarding all of this, but I do promise not to quibble about the name Thu Thu, or mention I cannot find reference to Jinn in any of Lovecraft's stories. Yes, I know Jinns are demons in Arabian folklore, which does tie into the Necronomicon's origin in Arabic Magick; but they are not used by Lovecraft in his mythlore. Not that I am a stickler for these things, normally, but if you are going to add to the pantheon of these creatures, at least add instead of carrying demons over. Interestingly, by mentioning Jinn here, Brown shades his story toward the supernatural end, which Lovecraft showed more enthusiasm for in his earlier stories, before his dark creatures became physically cosmological aliens. Now about that bone picking.

The presentation of R'lyeh within the story is dramatically different from the one given by Lovecraft. Here is the description given in Daniel Harms' The Encyclopedia Cthulhiana, 2nd edition:

Cthulhu and his minions built R'lyeh millions of years before the earliest recorded history, sallying forth from the city to battle the Elder Things and other alien entities. Then a catastrophe occurred. According to some scholars, the stars moved to a particular astrological configuration; others assert a great cosmic war occurred, and still others believe the creation of the moon was the cause. Whatever the reason, R'lyeh sank beneath the waves of the Pacific Ocean, becoming the tomb of Great Cthulhu...

...From the description of the corpse-city of R'lyeh which have come down to us, its buildings are made of colossal green stones which fit together in a non-Euclidean manner.

In a word, R'lyeh is quite messed up; lying somewhere between a sweat-inducing nightmare and the taste of a dried lemon slice, it lies deep within the Pacific Ocean, unfrozen in everything but time. How it winds up here in a wintry dimension surprises me. Brown and Podesta appear to have moved R'lyeh into a geo-dimensional location similar to Narnia; only instead of cute talking animals we have multi-tentacled beasties, easily speaking English, and children left orphaned after a cataclysmic war that separated them from their parents, leaving R'yleh buried under ice and snow. Howard's sudden appearance, which not so surprisingly, follows prophecy of a savior (spoken of in "the long lost book of faith") to free them all from the curse of Dagon.

In order to do that, Howard must retrieve another that book, in this case the dread Necronomicon, from the reposing Dagon, and return it to the leader of the children. Dagon, a sea-deity, is reposing in a cave. Spot, understandably, is reticent to enter the cave with Howard.

While the graphic novel is geared, according to Brown, for all ages, I would gauge it written and drawn primarily for the younger set. The storyline is simple and uncluttered with sophisticated in-jokes or pop-culture references that would have made it more fun for older readers, and Podesta's art does not hint at those non-Euclidean landscapes or Rococo nuances of supernatural alienation. A dab of edginess in the lines and a touch of somberness in the panels would evoke Lovecraft's world more faithfully. I cannot help but wonder what an artist along the lines of Joseph Mugnaini would have added.

I know Brown has a sequel waiting in the wings, should sales warrant it. I hope they do. The premise is a good one that holds a lot of promise, as Lovecraft's stories are filled with many possibilities for young Howard to explore. I also hope he matures quickly.

Author Bruce Brown provided a digital copy of Howard Lovecraft and the Frozen Kingdom for review.