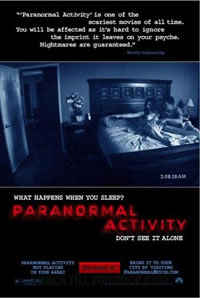 The idea for the film came about when Oren Peli began to experience "weird things" at the home in which he was living and wondered what would happen if he were to set up cameras to capture what happened as he slept at night. The vulnerability of being asleep, he reasoned, tapped into a human being's most primal fear, stating, "If something is lurking in your home there's not much you can do about it." (Wikipedia)

Paranormal Activity surprisingly frightens more with less scares as odd as that may sound. With a razor-thin budget, a cast of only four people, and events taking place entirely in one location--Katie and Micah's home--director Oren Peli's ingenious movie is a distillation of simple spook show tactics escalating in intensity. It is the Blair Witch version of home invasion-styled horror, understated but unrelenting.

Katie (Katie Featherston) has been haunted by paranormal events since she was thirteen. Micah (Micah Sloat), surprised by this revelation, is annoyed she did not tell him this before spooky sounds begin to keep them up at night. Micah sets up his camera in their bedroom, facing the bed, and hooks it up to his laptop so it can record while they sleep. We see everything through Micah's camera: the bedroom they sleep in; the rest of the house as he carries it into the bathroom, or the living room, or the kitchen during the day. We mostly see Katie as Micah holds the camera, which is probably why she grows more annoyed with his insistence on tackling her problem with his typical, and insensitive, guy attitude of technology-can-handle-it. I admit I would have tackled it the same way. While his constant recording and EVPs appear to give him control over the situation, he becomes increasingly frustrated because all he can do is observe events after they have taken place. How many of us, like Micah, feel powerful by all our techno-gadgets, yet, like him, all we do is watch, listen, wait, worry, and yearn for more sleep?

"Once we get a camera, we can figure out what's going on," says Micah; but the figuring out part becomes more difficult than he planned. Over the course of twenty or so nights, Micah's camera records small, creepy instances at first, which happen in the wee hours of the morning, including Katie's sleep-walking; then bigger, more frightening events happen. While much time is spent in silence watching them sleep, and waiting for something to happen, it never becomes repetitive. A timestamp in the lower right corner tells us when events occur during the night; this, combined with our anticipation of what will happen next heightens the tension. I kept looking intently around the bedroom and through the open doorway as time slipped by. A low rumbling signals an important moment while it helps raise the hairs on your neck. All this combines into a brilliantly simple effect Peli uses to build suspense. Featherston and Sloat fortify the realism by acting exactly like two people caught in a weird situation like their's would typically act. Their relationship begins to understandably deteriorate when sleep deprivation and powerlessness set in. Ironically, being able to see what is transpiring while they sleep makes them more fearful and helpless.

Katie asks a psychic (Mark Fredrichs) for help. His interview with Katie gives us interesting background to her supernatural experiences. Fredrichs is easily believable as the ghost-hunting psychic. When he concludes it may be a demon causing the mischief, he quickly explains he cannot help her and recommends a colleague who specializes in demon cases. He fears his presence in the house will only antagonize the entity. Micah does not want Katie to call in the demonologist, insisting he can handle the situation himself; a classic, I-don't-need-to-read-a-map guy-type response. Eventually, when his camera and EVPs do not give him the results he needs, Micah resorts to low-tech by using a Ouija Board to communicate with the entity, over the psychic and Katie's stern warnings that it would make things worse. The camera chillingly captures what happens when he leaves the Ouija Board alone with it. With the camera stoically recording everything, paranormal or not, its unemotional eye lends a level of creepiness that fosters a portentious atmosphere even when nothing bizarre is happening.

What Paranormal Activity achieves with its reality point of view camera setup--minus the shaky-cam--would have made William Castle smile with its unadorned, matter of fact, unblinking eye on the action. The use of an opening thank you statement to the San Diego police department enhances the realism of its found video footage approach, and even fooled the sales person at Best Buy (who found me the last copy of Trick 'r Treat they had in stock). A big horror fan, he saw Paranormal Activity and swore it was based on a true story. I thought he was kidding. He was not. I looked him in the eye and told him it was not based on a true story--demons do not go running around bothering people in reality--and  opening statements like that are used all the time in horror movies.

I enjoyed Blair Witch a lot: my wife hated it. It is one of those films that leaves people like that. What's special about this one is how that minimal horror here builds to an effective climax.

My biggest fear was to see the "Blair Witch Project" all over again (sorry, but I really hated this one).

neelam, no it is not based on a true story. The opening thank you to the police department is a wonderful, and very effective, gimmick to make you think it's "real."

all i can say was i slept with the light on after i watched it-i do love a good horror every so often and have to give credit to director Oren Peli as its been a long time since i actually jumped from my seat in fear. i would like to know if it was based on a true story? or maybe if some facts were true.

Religion has been around since the beginning of time for 1. and for 2 its not been proven that stuff like that doesnt exist. furthermore it would be wise not to mess with stuff u dont have any clue about. alot of stupid ppl think messing with voodoo and witchcraft is funny. ask some of em if they like hearing voices at night. Plz dont hate on religion if u dont understand it or dont agree with it. and yeah im religious. Pentecoastal in fact. so ive seen stuff that would make u wet the bed.

Why can't a horror movie just be a horror movie without someone bringing religion into it. I guess it comes down to whatever makes you feel safe. If that's believing blindly in something that has never been proven to ever exist, so be it. If you think religion is the reason why people think of this stuff, do some research. I idea of demons and ghosts has been there long before established religion appeared. It seems even 2000 years after it was established it's still the greatest form of mass control.

I don't know bc I certainly believe in demonic type creatures that are of the unseen. Many may believe they are alone but really we are tempted everyday to do something of a evil or sinful manner. I don't believe people would go around making up stuff, I mean where would we get the ideas for these movies of demonic spirits, they had to come from somewhere. If you believe in your religion or you know we were in some way created then we are in the middle of the negative and positive of reality. I am not a make believer but I am scared of many things but I do know that I have a mighty Being watching over me. I do not dabble in any type of spiritual events but I feel as if this was to truly happen whether it be positive or negative I would be a DEFINITE believer. I fear if it is ever to happen to me.