Six Other Movies To Watch
On Halloween Night 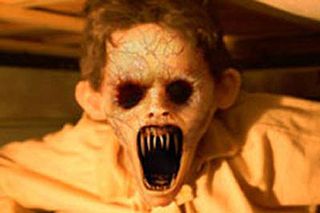 Sure, you know all the usual horror movies we watch and recommend for Halloween viewing. But what about those other movies? You know, the ones a little harder to come by, not often mentioned, and spoken about in words that end with a self-deprecating laugh.

Well, I will not apologize any more. These movies are creepy fun for a Halloween night, after you have eaten your twelfth candy bar and littered the floor with candy corn as you rummage deep into your trick or treat bag looking for the dark creamy stuff instead.

Make sure to watch them with others, though. It is no fun laughing in the dark, all alone, on Halloween night. You never know who is listening.

If you are looking for the perfect second-half of a double bill Halloween show with Plan 9 From Outer Space, look no further. Spookies is a film to be savored for its underdone acting, overbearing dialog, and incoherent story. So rarely do horror films reach the pinnacle of hilarious "what the f*ck" ineptitude this film achieves so easily.

It starts off innocently enough. The Hi-Lite delivery service delivers an unmarked crate to an unsuspecting writer. We know he is a writer because he is sleeping the day away, surly, and says he does not even watch television. He must be a blogger, too. Over his protests they leave the crate in his living room. He manages to pry the crate open and plug in the battered, rotary channel dial, black and white television set. He checks to see if it works, but only one show comes in clearly no matter which channel he turns to. The show is Zombie Blood Nightmare and not much happens in it except for zombies continuously staggering around in the woods.

Hack and slash, and run run run...to Glen Garig. The one place in the forest they really shouldn't be going is where they wind up. Before that, everyone is screaming at the top of his or her lungs for everyone else. So my question is this: when being stalked in the forest, can anyone hear you scream? Based on this movie the answer is no. As panic sets in, Tara manages to do a Looney Tunes into a tree, face first. While I think Elmer Fudd had better timing, she's not bad at it.

Escaping in a hijacked plane with the pilot and his daughter, after a robbery worth millions, a para-military bunch is double-crossed by one of their own; a very nervous guy named Burt. He jumps out of the plane with the big--and heavy--box that holds the robbery money, with apparently no plan on how he's going to carry it once he is on the ground. Being the dumbest of the bunch, he is murdered first; but not before he happens upon the Fowler residence, nestled snuggly amid lots of really creepy-looking scarecrows perched all around the wooden fence encircled with barbed-wire and lots of warnings to stay away. The weird weathervane on the roof, with the pitchfork and pteradactyl, is a clear sign this old homestead is more deadstead than homey.

And for more serious scares...

Taken from the three-volume manga by Junji Ito, the town of Kurozu-cho is beset by spirals spinning into the lives of the townspeople, driving them to madness, bizarre change, and gruesome death.

A horror story set in the Old West. Bank robbers flee to a lonely house in the woods. But they are not alone. Strange things lurk in the shadows and under the bed, and when they think they are free from danger, it becomes the most dangerous time indeed.

The video dead has been on my "to watch" list for some time now. I think that will be this evenings entertainment when the little ghoulies go to sleep.