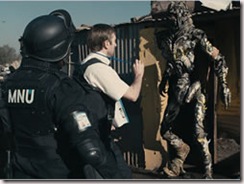 The striking thing about District 9, the expanded version of Neill Blonkamp’s short science fiction movie Alive in Joburg, is how it reworks familiar plot elements from movies like Alien Nation, The Fly, and The Matrix, cements them together with tableaux of apartheid and Nazi-like genetic experimentation, and still gleefully gets away with blowing lots of things up with popcorn-movie zeal.

Important to both the incidental social commentary and the loud action is Wikus Van De Merwe (Sharlto Copley), who makes us first dislike him for what he blindly stands for, then like him for what he learns to stand for. All of this does not make District 9 a great film, just a very good one; lying somewhere between Armond White's energetically overreaching discontent with its "sloppiest and dopiest pop cinema" substance, and Roger Ebert's ultimate disappointment that it "remains space opera and avoids the higher realms of science-fiction."

It is to District 9's credit that it dares to place more emphasis on its pop cinema approach, and less on those higher realms, to deliver pulp science fiction that, blow for blow, gets its deeper message across without preachiness or prompting moral revelation above the basic template of blood splatter, bullets, and bombs. Social commentary has all been done effectively and artistically before, frankly, to the point where it no longer really matters it be spelled out for us yet again in a movie that flows much better without it. Sometimes a movie should be just that, a movie; and not held to a higher accountability.

One aspect remaining uncluttered from higher philosophical exploration is the relationship that grows between the commonly—and somewhat derogatorily—named Van De Merwe, and the non-human alien with oddly human attributes, Christopher Johnson. When both must work together, each desperately needs something from the other, or die separately, everything else flows. It is this working together against an aggression now directed at both of them that District 9 manages to convey its social commentary in an entertainingly lively way.

Like 1988's Alien Nation, whose Newcomers were stranded in Los Angeles, the derogatorily named Prawns are stranded in Johannesburg, South Africa. But where the more human-looking Newcomers were assimilating, albeit slowly, into human society, after twenty years of not integrating well with the native population (they are mug-ugly and have seriously bad hygiene issues), the Prawns are herded into District 9, a government camp turned slum, where they are exploited by Nigerian gangsters who sell them cat food for technology, and quietly experimented on by the MNU; a privately-run defense and security contractor looking to harness alien technology and weaponry. But alien technology requires alien DNA to work, thus rendering their weapons useless to humans. Van De Merwe, through his clumsiness, provides MNU with the solution.

That solution is to harvest Van De Merwe's changing genetic material. All of it. After exposure to the alien ship's fuel source during a forced relocation of the Prawns, he begins changing into one. The transformation he goes through is similar to Jeff Goldblum's transformation from man to insect in 1986's The Fly, loose teeth-pulling, changing limbs, and fear included.

Fighting capture from the MNU, Van De Merwe is captured by the Nigerian gang. A black market has sprung up between the Prawns and the Nigerians, trading technology for cat food, which the Prawns love to eat. The gang's leader figures he can power the alien technology if he eats Van De Merwe's alien-mutated arm. At this point, the only person who does not want a piece of him is his wife, who has been led to believe his transformation results from having sex with a female Prawn, as preposterous as that may sound given their physical attributes.

All this explosive aggression culminates in Van De Merwe donning an Iron Man and The Matrix-styled exo-suit. Strangely, although the techno-suit is designed for an alien whose body is clearly non-human, the technology fits him like a glove. The Nigerian gang, MNU force, and Van De Merwe duke it out as Christopher Johnson tries to return to the mother ship, providing much opportunity for gory body explosions, vibrant vehicle explosions, and shrapnel-flying bomb explosions.

The movie unfolds after the events have taken place, using interviews and news footage mixed in with shown-in-the-moment situations; not shaky-cam, not cinema verite, but a smattering of the two, handled in such a way as to keep up the momentum for tension-building. Interestingly, critics have spent more time on its shallow apartheid and sociological underpinnings, and not enough on the movie's more interesting mechanics.

Moving between third-party retrospections on Van De Merwe's behavior and showing his panic brought about by his predicament, along with those pop cinema trashy explosive situations, Blonkamp and Terry Tatchell (co-screenplay) accomplish something unique: Van De Merwe's pain and hopelessness, even the Prawn's exploited and hopeless situation, in spite of their complete alienness, becomes personal and realistic for us, even through its science-fiction artificiality.

Fans of Stargate SG-1 will recall the need for alien DNA to power ancient alien weaponry in order to save earth from the Goa'uld. I wonder if Blonkamp is a fan of that television series?

I did a review for this film, absolutely loved it...I recommend everyone to see this, especially if you enjoy science fiction films. It was one of the better ones I've seen in a while.