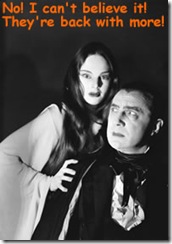 It's safe to say that this comic contains the most extreme material I've ever actually come across in a comic.

Each segment is about twenty minutes. In Part One, Mr. Briant talks about his new book, about his writing process, and working on Dan Curtis' The Picture of Dorian Gray. He does a cool bit of impersonation when reminiscing about two of the people involved, actor Nigel Davenport and producer Dan Curtis. In Part Two, he talks about what working at Hammer studios was like, and in Part Three, he riffs on a few dysfunctional fans.

While my encounter with Bruce Cambell was a far cry from the heart breaking meeting with Tom Savini, it still marks another moment of disappointment and the sudden realization that maybe Fango was wrong and that these high profile personalities aren’t as fan friendly as they make them seem.

Classic Horror deals death with a brutal kick and describes ten sadistic ways to die in a horror film.

They said, "Hey, guys, we have somebody getting yanked apart by two semi trucks in our movie. What about listing off some other brutal and/or sadistic deaths?" I was intrigued, which is often enough to get me to put fingers to keyboard, so here we go.

And Now the Screaming Starts worries about the first-class passengers in Crocodile 2: Death Swamp.

Regular readers of ANTSS know that I'll pretty much watch anything with a giant alligator or crocodile in it. Tell me that you've got a flick in which a giant croc lurks in the potted plants of a bowling alley and preys on the wacky regulars of league night and I'll go along, despite my better judgment…This flick pushes the limits of even my utterly uncritical indulgence.

The Vault of Horror goes retro with a review of Lucio Fulci’s Zombi 2.

It happened about ten years ago, when this cheesy, third-string pay-per-view provider I used to have presented a Halloween double-bill of Zombi 2 and I Spit on Your Grave (trick or treat, kids!!). Having the movie all but dropped in my lap, I knew I simply had to tape it. The time had finally come to confront Fulci.

Well, then. There you have it. Until next time.