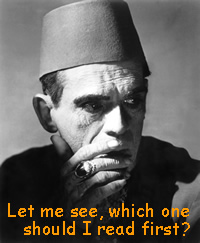 Horror's Not Dead digs deep to find The Burrowers:

Worry not, though. Petty’s film is no rehash of TREMORS. The title and trailer, perhaps wisely, broadcast this misconception but the reality is far more delightful. The title is a mere reference to where the threat originates from, it tells nothing of their behavior. Even if it did, no title could adequately advertise how pulse poundingly badass the titular species is.

Cinema Suicide goes all fanboy angst with a woeful tale about meeting Tom Savini on a bad day:

The lines were huge! Lou Ferigno was there, Ron Palillo who played Horshack on Welcome Back Kotter, the guy who played Will Robinson on Lost In Space, Boomer from Battlestar Galactica. All of these people had crowds. All of them, that is, except for Tom Savini, who I discovered sitting mere feet from me.

Evil on Two Legs has something to cluck about with Poultrygeist and Gutterballs. So don't be chicken, it's finger-licking good:

Poultrygeist is by far the best troma film i've ever seen. sure, as in all troma films, much of the humor centers around hurling turds at the camera... but these are smart turds. mixed in with the 5th grade level bathroom humor is some biting satire on corporate america and relationships and, most notably, some damn catchy music.

Even discounting my bias, Dragon Head is one of the most compulsively readable manga to reach an appreciable non-otaku audience (or at least this member thereof) in quite some time.

Vault of Horror shows its feminine side to Day of the Woman by opening up with Jaime Lee Curtis:

Being the daughter of Psycho's Janet Leigh, Ms. Curtis had some formidable shoes to fill. But she managed to do it, and then some, becoming an even better remembered horror heroine than her mom in the process.

I've decided to take a walk myself. I've been a long time lover of Hammer Studios, the UK's home of horror throughout the 50's, 60's and 70's. With their age and unique flavor of horror, I figured it was a good opportunity to share something that not so many horror fans are familiar with these days.

I came across a volume that caught my attention because it touched on a neglected area. The book was Jasmine Day’s The Mummy’s Curse: Mummymania in the English-Speaking World (Routledge, 2006). After some Internet detective work I was able to track her down and secure a copy of the book.

And Now the Screaming Starts gives us nine things we should know about Asia Argento:

We're way too cowardly and lazy to do something that might push us beyond the pale and get us ostracized by the horror blog community. What's the solution? Do a list, but do it on transgendered sexual weirdness with everybody's favorite moody daughter of Dario Argento. We get in on the whole traditional listy goodness, but we roll a little weird and try to keep our thin alibi of individuality.