« Movie Review: Max and Me Look At Experiments in Terror 3 | Main | LOTT D: May Horror Roundup »

Book Review: Hater
Whose Fear Is It? 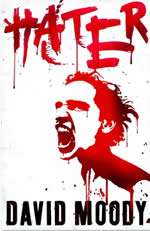 I phoned the office a few minutes ago but there was no answer. I was relieved when I didn't have to speak to anyone but then I started to panic again when I thought about how bad things must have got if no one's turned up for work. There's nothing else to do now except sit back on the sofa in front of the TV and watch the world fall apart (Hater by David Moody).

It takes a little over a week for the world to fall apart for Danny in David Moody's Hater; not that his life was all that together before everything else goes to hell. Family, neighbors, people around him are propelled into a Ballardian new world order where fear leads to anger, anger leads to hate, and hate leads to violence. But this dark side, in Moody's first book of his Hater trilogy, depends on whose point of view your seeing the escalating, spinning out of control, events from. As Danny describes his much less than ideal job, dissatisfying life, cold marriage, and children-interruptus, you wonder how much worse it can get for him. A lot, surprisingly. 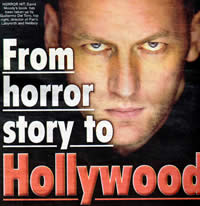 Moody packs quite a wallop in a small space; his surgically concise descriptions of events are carefully measured between Danny's impressions of his depressing life and the disturbing--italicized--third-person vignettes describing sudden, erupting hatred that leads to death; violence committed by friends and strangers on friends and strangers. By contrasting Danny's simmering dissatisfaction, bordering on hatred for his professional and social shortcomings, with these terminal encounters, Moody achieves an unusual terminal velocity between Danny's slowly building reaction to this breakdown of law and order in society and the slow, at first, incremental increases in violence occurring around him wherever he goes.

Whether it is at the local pub during a soccer game, or on the street going to and from work, or in the apartment upstairs, the violence escalates to a point where he finally has to act to protect his family: by locking himself, his wife Lizzie, and their three kids inside and hoping for the best as television flashes between clueless experts discussing the situation and increasing reports of explosive, sporadic chaos, until the experts disappear, displaced by a not very assuring message:

It takes Danny too long to realize the situation is not under control. Anyone can suddenly become agitated and violent for no reason; young or old, rescuer or rescued. When he finally gets around to hunkering down, he realizes he's ill-prepared for doing so. Off he goes to the local convenience store to get food; a tad late after the looting has begun, but he does manage to not look at anyone--that seems to set them off--and not get involved--what would be the point?--long enough to grab anything still on the shelves. And when a little girl pummels her mother to a bloody pulp in the aisle of the store, he makes sure to not get involved, either, like everyone else.

None of us can risk getting involved. Everyone seems to have come to the same conclusion. Everyone is shocked by what they can see but no one does anything to help...Could any of my children do what I've just seen to Lizzie or me? Worse than that, could we do it to any of them?

Returning home with his less than an overflowing box of rations, he has a near breakdown when his wife criticizes his choices, including the jar of Honey no one likes. Were Danny more computer literate, he would have found everything he needed to know about the situation on Twitter, of course. Maybe even CNN. But having only television to turn to for answers, when the non-informative newscasts stop he is left to fend for himself and create that 'safe room' the television said he should be doing, just before it went dark. Surgical masks will not help here, and even with everyone staying indoors, the infection is still spreading like wildfire.

Matters become worse. Corpses and garbage bags start piling up as the military scours the streets for Haters, rounding them up and shooting any who resist. Haters are the ones causing everything to fall apart. Lizzie tells Danny to get her father. Danny does not like Harry. He is an old fart who does not like his daughter's choice in husbands. And then Moody tosses a curve ball, neatly flipping his first person narrative as easily as turning a coin over to show the other side. You wonder how much worse it can get. A lot, really.

After reading Hater, you will hate having to wait for the second book in the trilogy, as much as I do. Guillermo del Toro is producing the movie version, which is in preproduction.