Movie Review: Igor (2008)
Where's Dwight Frye When You Need Him? 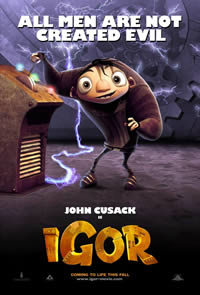 The most clever artifice in Igor is the name of the country the title character lives and works in--Malaria. That is as clever as it gets in Anthony Leondis's animated movie about a mad scientist's assistant who wants more out of life; to create it, mostly, like any self-respecting mad scientist craves to do.

Missing from this fairy tale of endlessly dark and stormy days, laboratories in high towers crackling with electricity and maniacal laughter, and evil scientists churning out evil devices, is the defining touches that Dwight Frye brought to the role of Fritz--not Igor--the hunched back assistant in Frankenstein. Absent, too, are the refining touches that Bela Lugosi brought to Ygor--pronounced E-gor--the hunched back, broken neck lunatic and part-time assistant in Son of Frankenstein. Not even a hint of Marty Feldman's hilarious Igor--pronounced Eye-gore--another energetic, rather persnickety laboratory assistant in Young Frankenstein sparks life into this surprisingly lifeless nuts and bolts story by Chris McKenna.

Surprising because given the rich cinematic history of monsters and madmen this film should have drawn upon, we are instead given yet another reworking of what has become a clichéd theme in animated movies geared toward the younger set: disillusioned male yearns to break the mold and become something he is told he cannot be. Toss in misfit--but funny--sidekicks, add a dramatic failure or two, then end with boy making everyone see the life-altering truth he triumphantly uncovers as he achieves his dream. Along the way, make sure to depict female characters in conniving, devious, helpless, clueless, romantic, or otherwise secondary roles. Unless, of course, this is a Walt Disney movie; then just switch male and female roles: everything else still holds (at least before Pixar, anyway).

The Nightmare Before Christmas fans looking to recapture the ghoulish magic of Tim Burton's classic will be sorely disappointed. Not even Malaria's King Malbert, who is conspicuously drawn as if he is the twin brother of Halloweentown's Mayor, can liven up the proceedings.

While the animation is suitably Gothic and steampunkish in tone and line, missing is the ghost in the machine, the black and white eeriness of morose landscapes lost in time between medieval and baroque architectures on a budget, and fearsome creatures with inhuman features but human hearts. In short, Igor is drawn too damn cute, and his world is weird but not freakishly so; not Addams Family freaky or Universal Studios Horror limbo freaky. At all. And the music is to die for, with emphasis on die. Where does Louis Prima fit into the lexicon of horror? Certainly nowhere near the mood that would have benefited Igor's dream of becoming the greatest mad scientist in Malaria.

Relegated to lisping, dull-witted assistant status for one addle-brained Dr. Glickenstein, Igor gets his chance to create the perfect entry for the Evil Scientists Fair when the good doctor gets blown to smithereens by his latest failure. In spite of the help from his previous experiments, Scamper, an immortal rabbit with a death wish, and Brain, an often clueless, pickled brain in a jar--mistakenly labeled Brian--Igor manages to create life in the form of a towering, misshapen monstrosity named Eva. The "evil bone" in Eva, however, instead of turning her into the ultimate weapon of utter destruction as intended, fizzles out. In an attempt to kick-start the evil bone, Igor takes her to the local Brain Wash. His plans go awry when Brain screws up and switches her programming of violent imagery with an Inside the Actors Studio interview conducted by James Lipton (okay, I'll admit this was a clever bit). Instead of an evil monster, Igor has a budding actress on his hands intent on performing Annie with verve.

Doctor Schadenfreude, the celebrity mad scientist who steals winning inventions from everyone else with the help of his Jekyll and Hyde-ish accomplice, Jaclyn, goes after Eva, hoping to enter her into the contest for his own benefit. In a bizarre climactic rumble, now evil Eva, dressed as Little Orphan Annie and singing The Sun Will Come Out Tomorrow, pummels and crumbles all other entries and then some. But will Igor save her and reveal the awful truth about King Malbert and Malaria? Will Dr. Schadenfreude achieve his goal of becoming King of Malaria and the richest evil scientist ever? Will Igor's dreams ever amount to more than a hunch?

Unfortunately, when we find out, it is neither exciting or emotionally satisfying. Igor is as subtle as a clubfoot, and just as uncomfortable a fit in the genre it draws upon for it's storyline.

Posted at 03:29 PM in Art/Animation | Permalink