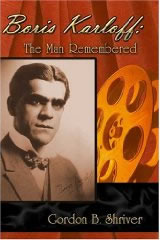 Horror suggests physical repulsion, disgust, and that seems to me a worthless, pointless reaction for any work of entertainment to aim at; it's so easy it isn't worth doing. An eye, say, plopping all bloody into a glass dish may provoke a gasp of revulsion when it is first seen on the screen, but this is an entirely physical thing, and something one can get used to--no doubt with a certain coarsening of one's responses in the process. The second or third time something like this happens in a film, the surprise and excitement is gone, and then you come back to the old, inevitable question. What is there to support it in the way of plot and characterization, to give it some point other than providing an immediate physical shock? In other words, what is there to appeal to the spectator's imagination? --Boris Karloff interview, The Times.

I met Gordon B. Shriver at the Monster Bash in 2007, and again in 2008. He read from his one-man play on the life of Boris Karloff at Max, the Drunken Severed Head;s annual party for the notables and quotables attending the annual classic horror convention. Max lets me in anyway.

Boris Karloff: The Man Remembered grew out of Shriver's fascination and admiration for the man whom many horror fans hold in high regard. Karloff's tireless and masterful acting brought life not only to the Frankenstein Monster, but to the Mummy and countless other major and minor roles, whether by using his unique mannerisms and posture, or by using his unmistakable voice,  lisping ever so eloquently, immortalized as the narration for 1966's animated How the Grinch Stole Christmas! Karloff became the personification of embraceable horror for a generation--and beyond, bringing his terror with a twinkling eye into everyone's living room.

While we grew to love him in movies that tickled our fright-bone, much of Karloff's acting also occurred on stage, radio and, in later years, television.Throughout his long career, even when faced with debilitating arthritis and emphysema, he continued to give every assignment his professional all. Shriver's correspondence with many of the people who worked with and knew Karloff provides a view of the man as consummate acting professional, always downplaying his stardom, and tempering his sinister onscreen persona with wit, charm, and an urbane demeanor in real life.

Beginning with Karloff's more recognizable early beginnings in film, Shriver directs our attention to the extensive radio, stage, and early television work that Karloff excelled in, providing background to his performances on stage in Peter Pan and Arsenic and Old Lace, his chill-inducing voice to Inner Sanctum Mysteries and Lights Out over the airwaves, and to live television dramas and series such as Suspense, The Veil, and Thriller. Shriver also provides a complete rundown on the filmography, discography (remember those wonderful Caedmon records?), radio show appearances, commercials, stage plays, and television appearances Karloff lent his many talents to during his multi-faceted career. Shriver's book is an enjoyable and insightful study into the work and soul of a man the horror genre owes a great deal to.

What is it about Boris Karloff that has prompted you to write a book about his movie, radio, and television work?

Having grown up watching horror (classic and current) and reading Famous Monsters, I was familiar with Boris already, but it was The Frankenscience Monster, Forry Ackerman's book on him, that ignited my ultimate journey. I liked reading biographies as a kid, and Boris just seemed to be such an interesting person, and with such a long career. I guess I thought that maybe he'd done it all--movies, Broadway, TV, and a career like that was worth learning more about. I was 11 when he died and remembered hearing it announced by Walter Cronkite, so his death was still recent history. A year later, I played Mr. Darling in a children's theater production of Peter Pan and, as it turned out, our director when he was younger had seen Boris in that show when it toured. 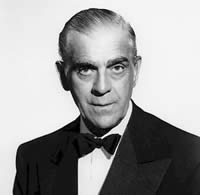 Why do you think he's remained an iconic image for the horror genre?

I think Boris has remained such an icon in part because it's his portrayal of the Monster that paved the way for all the others, and the original is one of those movies people who grew up in that era remember where they were when they first saw it. Plus, his image made him stand out in that genre, and people became associated with him ever after, in the same way Errol Flynn is usually associated with swashbuckler/adventure films and John Wayne is with Westerns. Also, the fact that he lived into the television age. With his movies being broadcast, while at the same time people could see him on current TV shows, that, too, helped maintain that image in their minds and has to this day. I would add that people saw what a warm, cultured person he was--as well as a versatile actor--and that made them respect him even more.

How did the spark for writing about him take on life?

We lived in the Chicago area then and I regularly watched Creature Features on WGN, so at the same time I was watching his work, I started--if you'll pardon the expression--haunting libraries, looking in books on movies for whatever mention of him I could find. I always liked the craft of writing anyway, even before I hit my teens. I started amassing copies of this material I located, and it occurred to me that since he'd be gone fairly recently, there must be people around who had worked with him.

I looked up addresses of these actors and directors, and using a manual typewriter (I taught myself to type), sent out letters to them, asking what they remembered about knowing and working with him. This was 1972, and I didn't know whether they'd reply or not, and sure enough, they did. I was 15, still in high school (I didn't tell them that!), and getting mail from people like Peter Bogdanovich, Robert Wise, Julie Harris, and Ronald Reagan, who was still governor of California.

In my junior year, I decided to write an article on Boris, using the material I'd gathered, so I did, and submitted it to a quarterly magazine devoted to the media I'd seen on a newsstand called Views and Reviews. Believe it or not, they accepted it, said it was excellent, and was going to publish it in their June '75 issue and pay me $15. Alas, they went out of business. Well, I continued this quest to follow that star, doing more research and contacting more people. I expanded the piece while I at San Francisco State (I was a broadcasting major). It was called A Very Human Monster and--coming back to Forry Ackerman--it was published in Famous Monsters in 1979, shortly before I graduated.

I could have stopped there, but since I had this reporter's curiosity (my emphasis was in broadcast news, which I went on to work in), I couldn't stop. The letters continued, and then I started doing interviews over the phone, too. For the next 20 years, I kept at it--it became a hobby--and traveled to places to do research, such as New York, Los Angeles, Madison, Wisconsin, and Eureka Springs, Arkansas. I think it says a great deal about Boris as a person--and what he meant to these people (100 of them total)--that they made the effort to respond. 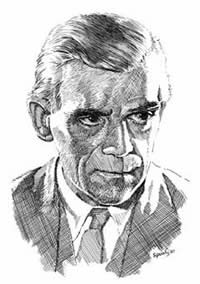 You've written a one-man play that revolves around the life of Karloff. Tell us more about it.

Prompted by the suggestion of a friend, I've written Karloff in Twilight, a one-man show about Boris based on my book. My friend thinks I do a good impression of Boris, so I thought I'd give it a whirl. I'm an actor myself, having done theater in school and here in the Atlanta area, where I live. (And I'd love to play Mortimer in Arsenic and Old Lace!)
The premise is that Boris is shown at home and reminisces about his life, career, and the people he's encountered. Put another way, he is saying in the first person what I wrote about him in the third. And it takes place while in the twilight of his career. Boris' daughter Sara has read it and liked it very much. I've performed it before groups and had good response to it. My goal is to have it staged somewhere.

Do you think modern horror actors will ever achieve the near universal recognition that Karloff achieved?

No, I doubt it. Current horror actors aren't the household names people like Boris, Lugosi, and Price are, nor have they been at it for so many years or a fixture in people's minds. The reasons I gave for Boris' longevity I don't think will apply to them.

Why don't they apply anymore?

I think those qualities don't apply much anymore for a couple of reasons. When Boris was the Monster and Bela was Dracula, they became instantly associated with those characters. Today's horror actors--and how many are household names like Boris and Bela were (and still are)--for the most part aren't known for being specific characters. Robert Englund being Freddy Krueger is about the only one I can immediately think of. Even offscreen, Boris, Peter Lorre, and Vincent Price were heard on radio or seen onstage or appeared often on television, often perpetuating their image. People got to see them as they really were and that reinforced the positive attitude fans had about them even more. They were liked for who they played onscreen and for what they were off it.

What is your opinion on today's horror movies?

I see very few current horror movies, because most of them don't draw my interest. I'll read some reviews or see previews, and most of them don't sound or look worth seeing. I remember seeing a preview of Saw and it just looked ugly to me. They're just too graphic, have too many special effects, and poor scripts. For example, The League of Extraordinary Gentlemen (though not really a horror film, but it had some traditional horror characters) and Van Helsing I thought had promise, and failed to deliver for the reasons I just mentioned. I did like The Others--more of a traditional ghost story than a real horror film--and it was subtle and effective, as were the classics we appreciate.

One of the things that's fascinated me about Karloff, which I only learned years after I first idolized him as Frankenstein, is his status as a half-caste Anglo-Indian. If Mr. Shriver is still reading (I'm a bit late to this post), does your book address this part of his heritage in any way?

I know that in his early, silent films he specialized in "oriental" roles, and of course, The Mask of Fu Manchu was a continuation of this. I find myself wondering about his bi-racial status, especially in light of the racial dynamics of the 1920s, and whether this played any role in his move into horror films.