« LOTT D Roundtable: Evil Kids in Horror Movies | Main | Movie Review: Diary of the Dead (2007) Another Day Unlike Any Other » 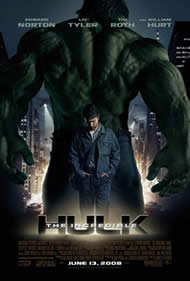 By the time the Incredible Hulk bellows his signature "Hulk Smash!" in-your-face taunt to the Abomination, he's already done quite a bit of it in director Louis Leterrier's successful return to the comic book and television roots that made the rampaging, green (with purple pants), behemoth a colorfully melodramatic composition of frenzied destruction and pathos--a superhero more a reluctant monster doing good by accident rather than a skillful, caped-crusader fighting evil by design.

Writers Zak Penn and Edward Harrison (actor Edward Norton's pseudonym), reboot the Hulk's origin, distancing it from Ang Lee's failed attempt at the franchise in 2003. In the succinct opening credits montage, which uses the same gamma ray infusion device first seen in the 1970's television series, The Incredible Hulk, flashbacks show the disastrous results of the failed experiment leaving Dr. Banner (Edward Norton) prone to hissy fits on a giant scale. Lou Ferrigno, television's Hulk, puts in a cameo appearance, reinforcing the thematic connection to that series. There is also a nod to Bill Bixby, who starred as Dr. Banner, through a snippet of his The Courtship of Eddie's Father, playing on a television set.

In this second, more energetic, attempt to launch the movie franchise, Banner is on the run in Brazil, laying low from the U.S. military while searching for a cure to the raging spirit within him. This transition from Ang Lee's more introspective approach lessens the relationship-heavy storyline and heaps on the throw a tantrum, whoop-ass Hulk transformations. With smashing moments strung end to end, briefly bridged with poignant ones showing how unfortunate his condition can be--he cannot make love because too much excitement would you-know-what--this movie is less character-complex and talkative than Ang's, opening the landscape wide for plowing with carnage aplenty; exactly what the perfect, breezy summertime movie is all about: simplicity, much action, and pour on the butter. 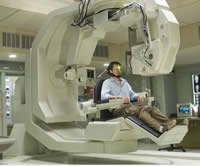 Working at a bottling plant, Banner is soon tracked down by Ross (watch for the requisite Stan Lee appearance here) , who dispatches an elite force headed by one particularly blood-thirsty Russian soldier, Emil Blonsky (Tim Roth). The opening panorama of sprawling slums, shanties, rooming houses, and narrow twisting streets stumbling into each other across the mountainside provides the backdrop for a helter-skelter chase. When Blonsky and his men find themselves suddenly faced with a green bogey that can hurl car-sized chunks of metal, torn off like cotton-candy from the surroundings, Blonsky, who loves a good fight--but is getting too old to enjoy it--is eager to learn more. Ross, seeing a perfect candidate for a little bulking up regimen, injects Blonsky with a concoction developed by one Dr. Reinstein during WWII. Real comic book fans will recognize that name: he's the scientist who created the super-soldier formula that created Captain America (another member of the Avengers along with Iron Man, hint, hint). 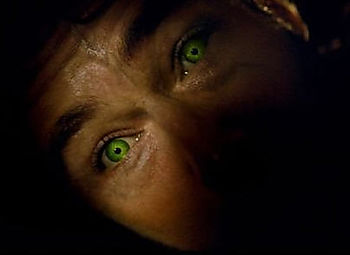 Banner escapes and heads home to seek the original data from his failed experiment, and to contact Mr. Blue, a scientist he is computer-chatting with, to help find a cure. Another showdown between General Ross and the Hulk on a college campus leaves Blonsky ailing near death, but amazingly quick to recover, and introduces the Hulk to the wonderful world of Internet buzz as he's captured on phone cameras and blogged to death. With his unquenchable need to be bigger and badder than the Hulk, Blonsky forces Mr. Blue's assistance in making him into an Abomination: a more ugly, bigger, and nastier version of the Hulk. This, of course, gives license to trash the streets of Manhattan, yet again, big-time, in scenes reminiscent of Cloverfield.

Given Ross's obsession to exploit Banner's mutated genetics to create super soldiers at any cost, and the Hulk's pulverizing tantrums when cornered, it is hard to say who leaves behind more of a collateral mess; but it is fun watching them go at it. The pyrotechnics and CGI are front and center here, giving this Hulk more of his comic book mannerisms and personality, two important defining elements missing in Ang Lee's movie. Caught in the middle is General Ross's daughter, Betty (Liv Tyler), whose contempt for her callous dad grows with each costly failure to capture Banner, the man she loves, big green feet and all. Edward Norton makes a believable Bruce Banner, and Liv Tyler brings an apple pie smile and personality to match.

Tony Stark (Robert Downey Jr.) puts in an appearance, hinting at interesting possibilities for this now  established franchise. With Marvel in control of their movie productions this time around, the interconnected storylines originally developed in four-color panels on pulpy paper, and later revamped in the Ultimate Marvel Universe, can now be realized in the more vibrant palette of the theater screen. As a Merry Marvel Marching Society card-carrying member from then to now, all I can say is "Make Mine Marvel!"

Posted at 04:27 PM in Superheroes | Permalink

A little review done by my friend about it :

Yes, having Edward Norton in the role is a major step forward. I think his additions to the script helped.

this new hulk is a lot more fun than the first one with Eric Bana; as usual Ed Norton has gravitated to a "split personality" role...