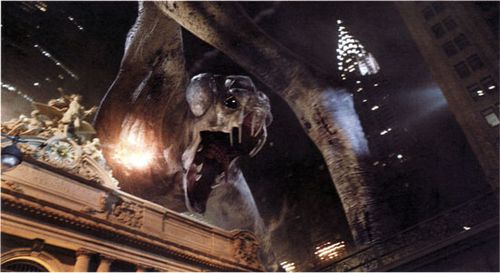 In 1954's classic horror movie, Gojira (Godzilla), the atomic age of mass destruction spawns the monstrous reptile Godzilla, a prehistoric creature rising from the depths of the Pacific Ocean to wreak havoc on Tokyo. As city buildings crumble to dust and thousands of people die, a humbled military fight back in a futile attempt to stop the destruction. A renegade scientist is finally convinced to use his own weapon of mass destruction to destroy Godzilla, but he takes his own life to make sure the weapon will never be used again.

In Cloverfield, we have a newer horror movie more suited to our age of uncertainty and unreason, in which a monstrous creature of unknown origin comes from the depths of the Hudson River (or so it seems) to destroy New York City. With no conclaves of nodding scientists struggling to understand why and no military strategy sessions to explore best options for defense, it's not clear where it--a huge bat-like creature that looks very much like the huge bat-like creature in The Angry Red Planet--comes from or why it's destroying everything in sight; but the sudden appearance leaves no time for heroics, strategies, or any of the characters making sense out of what is happening. As Manhattan crumbles into dust and people die, a desperate and overwhelmed military fight on as the creature and the many smaller multi-legged beasties tagging along with it wreak havoc and death.

This is not the first time New York City has been laid waste by a giant monster that comes out of the harbor. In 1953's The Beast from 20,000 Fathoms another prehistoric reptile, awakened by nuclear radiation, stomps and chomps down on the city and Coney Island until a radioactive isotope, shot from a rifle held at the top of the Cyclone roller-coaster, enters the creature's earlier bazooka-induced neck wound to stop it cold; but not before a virulent contagion, spread by the blood oozing from that neck wound, takes it's devastating toll on the population. The Manhattanites in Cloverfield do not fare much better.

What is different here is we get to see the carnage from the civilian perspective, at street level, without miniatures being stomped on, when a going-away party turns into a nightmare for five twenty-something friends. There is no renegade scientist (sane or questionably sane) to save the day, no atomic age rationale to explain and provide a simple solution, and the friends are only trying to stay alive under killer circumstances. Keeping us shoulder-to-shoulder with them is director Matt Reeves shaky camcorder view of the carnage and chaos throughout. Yes, it is one of those point of view, found footage movies. But stick with it even if you are not all that into such techniques of storytelling as it is worth your time.

What you will see is the non-stop recording of Rob’s (Michael Stahl-David) party by his friend Hud (T. J. Miller) morph into a reasonable contrivance for the found footage delivery. We follow Rob and friends up to the rooftop to see what is going on after the building shakes and the power goes out, then hastily run down the stairs and onto the street with them as things heat up. When the Statue of Liberty's head comes, very impressively, crashing and rolling down the street, confusion and fear kick in, leading to an escape run to get out of Manhattan. The rough handling and sudden gaps in scenes as Hud mishandles his camcorder creates realistic, nerve-wracking tension, and a damn-it-Hud-stand-still annoyance from us; but the quality of his experience, and therefore ours, is exactly what you would expect from anyone using a camcorder during a crisis situation, responding to events unfolding in rapid succession while trying not to trip over their own feet in the process.

This is where a suspension of disbelief comes in handy: Hud keeps filming EVERYTHING through his camera, even though any normal person would chuck the bloody thing and run like hell for safety. All found footage movies must, eventually, rely on the viewer to disengage common sense for the story to work; some use a more natural integration of it, like Troll Hunter, where a bunch of college students are already filming a documentary within the movie’s framework, so they would, naturally, want to record everything that happens. Their found footage is plausible enough, because of this, for us to accept.

Cloverfield integrates its shaky cam with precision, providing enough visual teasers to keep scenes tense and visually engrossing. Given the twenty-something generation's need to be constantly connected socially to share every storm and urge, it is not a long stretch to believe Hud would keep filming through thick and thin. YouTube and Instagram love you-are-there footage like that. I wish I knew the brand name of that camcorder, though, since its battery life is amazing. It never wears down

Also amazing are the claustrophobic and dismal scenes of turmoil. While the man-in-suit Godzilla and Ray Harryhausen’s stop-motion monsters were state of the art for the 1950s, today's minute-timer, media-savvy, audiences require more realism and relevance. Seen through Hud’s camcorder, the mix of scene staging, tantalizing creature glimpses, and frenetic action stay believable through its lens. Highlights include Rob turning on the camcorder's night vision in the subway tunnel to see what's spooking the rats—really should have done that sooner—and Hud's close-encounter of the monster kind, giving us a long hard look at the skyscraper-sized creature's face: classic terror elements jazzed up for the digital age. Scripter Drew Goddard knows his horror: the Brooklyn Bridge encounter, reminiscent of a similar monster-whump in It Came From Beneath the Sea is a terrifying jolt.

While Cloverfield is classic horror at heart, there is a love story driving the action in the right direction too (gladly for us horror fans; sadly, not really well for the characters).

After Rob has a blow-out with his girlfriend at the party, when she later calls his cell phone, hurt and pleading for help, he is off and running to save her, even though his path leads right into the chaos. His friends decide to stay close. Reaching the building where Beth (Odette Yustman) lives, Hud's "don't tell me that's where she lives!" line sums it up best. This is when the struggle really begins.

For all its social-generational look and feel, Cloverfield relies on good old-fashioned horror themes like big monsters whumping big cities to deliver the shocks.

Wonderful insight. Yes, you're right, the civilian perspective is covered: I recall the scene in Gojira where a mother is holding on to her two children and telling them they're going to see dad soon. It's a chilling scene, especially with the destruction all around them. Cloverfield intensifies that personal tragedy throughout by leaving out the scientists and minimizing the military's role.

Wonderful insight. Yes, you're right, the civilian perspective is covered: I recall the scene in Gojira where a mother is holding on to her two children and telling them they're going to see dad soon. It's a chilling scene, especially with the destruction all around them. Cloverfield intensifies that personal tragedy throughout by leaving out the scientists and minimizing the military's role.

Regarding the use of a camera to provide a civilian perspective: That happens in the Godzilla series twice. In GOJIRA, the TV crew is filming the destruction, and one reporter says solemnly, "This is not a movie or a TV show; this is real." I always took that as the filmmaker's hint to the movie audience to take the subject seriously, not as a fun monster movie.

In GODZILLA, MOTHRA, KING GHIDORAH: GIANT MONSTERS ALL-OUT ATTACK, the final reel consists mostly of the young female reporter tracking the action and filming it with her hand-held camera, for live broadcast.

Obviously, CLOVERFIELD took the idea further, creating something derived from the past that still looks new.