Hanako-san's ghost haunts the restrooms of many schools in Japan. She appears if her name is called, but you really don't want to do that; especially on a dare, late at night, when her darker, revenge-filled spirit is at full strength. She died from a broken heart, from constant bullying by her peers, and waits patiently for the time when her tormentors will have to go. School children in Japan were so frightened by this urban legend, many could not go alone to the toilet; where Hanako-san patiently waits. It is said that if you listen closely, you can hear her whispered curses echoing softly off the tiles... 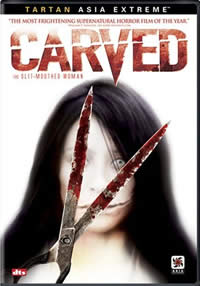 Japanese urban legends are engrossing, aren't they? While similar in many respects to American ones, they tease reason loose from the mundane, and play on our fears of unrelenting  supernatural evil and contagion, spiraling out of control in a way that uniquely plays off the community and tradition-based culture of Japan. In America, the witch, Bloody Mary, simply rips your face off if you're suckered into saying her name thirteen times out loud, while looking in a candle-lit mirror in the dead of night. In Japan, she'd be the ghost of some mistreated woman who rips your face off, then pops up unexpectedly to rip all of your friends' faces off, then possesses someone close, just when you think it's over, to continue ripping faces off anyone coming into contact with you.

And she would most likely hold a large pair of blood-dripping scissors to squeeze every last drop of terror out of you as she silently floats across the floor in a greenish haze, anxious to snip snip snip your flesh.

Director and co-writer Kôji Shiraishi's, A Slit-Mouthed Woman (released as Carved in the USA by Tartan Video), uses the Kuchisake-onna urban legend as its source. In Japanese mythology, Kuchisake-onna is the evil spirit of a woman mutilated by her samurai husband, who cuts her mouth open from ear to ear as retribution for her infidelity, or pride, depending on which version of the legend you prefer.

In Carved, Kuchisake-onna is transformed into the evil spirit of a sickly mother who physically abused and killed her children. Her obake returns to prey on the frightened children in the small town of Midoriyama, wielding a rusty pair of bloody scissors and wearing a white hospital mask and trench-coat. The white mask, a common sight in Japan, covers the gash that runs from ear to ear, a nod to the original legend, but not quite explained here. The traditional "Am I pretty?" question, which presages violent death for her victims, is also out of place. Instead, Shiraishi and co-writer, Naoyuki Yokota, while keeping the well-known aspects of the legend, alter it by adding abusive mothers as the underlying instigation and perpetuation of the horror that steals children away late in the afternoon to murder and mutilate them.

Many Asian horror films center on an unrelenting evil force that grows from the murder of an innocent person. While vengeance is often the catalyst, that force soon envelops or contaminates anyone in close proximity, whether good or bad, as it spreads outward. In Carved, the evil grows from a person who's bad to begin with—a refreshing change from the usual Japanese approach, though it's a typical American Horror staple: we like our monsters monstrous from the start you know, and our victims less than pure so they sort of deserve what they get.

The unsavory story begins with three kids talking about the slit-mouthed woman as they walk home after class. Indeed, I wish I had a quarter for every time "slit-mouthed woman" was said by someone in the film. Half-way through I stopped counting. An earthquake shakes the town, and releases the spirit of Kuchisake-onna. Before you could gasp "slit-mouthed woman!" she snatches away kid number one. The next day, Mika, the abused-at-home and bullied-at-school kid thinks she's next. Depressed kids often think like that, even in Japan.

Ms. Yamashita, her teacher, walks the students home, and when it comes time to drop Mika off, they start talking. Mika shows the bruises her mom left on her arms, but Yamashita, a reformed abuser herself, yells at Mika for wishing ill on her mom. As Mika runs away—that's right—she's nabbed by the slit-mouthed woman while Yamashita cowers in fear.

Maybe they should have sent Mr. Matsuzaki to take the kids home instead. Strangely, he's not really scared of the slit-mouthed woman (have you started counting how may times I've written "slit-mouthed woman" yet?). But he does keep hearing her voice in his mind, just before she grabs a kid and disappears. The police, not believing Yamashita's supernatural depiction of the kidnapping, think it's someone dressed up as—oh, you know who—so Yamashita and Matsuzaki team up to search for the missing children. When he hears "Am I pretty" again, they jump into his car and race to the home of the slit-mouthed woman's next victim. They show up in the nick of time to watch the slit-mouthed woman grab the poor kid from behind. When she whips out her scissors to do a little trimming on his mouth, Matsuzaki plays WWE SmackDown with her while Yamashita cowers again. Surprisingly, he plunges the scissors into the slit-mouthed woman instead and "kills" her. But not for long.

Up to this point, the pacing is slow and remains that way. Tension doesn't build in this film, and the emotional setpoints that should kick our feelings into gear around certain scenes don't budge one iota. Yet, the storyline remains strangely involving, and a few scenes, while lacking emotional charge from the missing tension-building, will still make you squirm in discomfort.

I squirmed when three bound children are brutalized, leaving one stabbed to death, another horribly mutilated and scarred for life, in both body and soul, and the third having to witness it and wonder when she's next. While the atrocities are mostly implied, the impression is still harrowing. We don't often see children harmed in horror films, and I hope this doesn't mark a trend in that direction. But within this film, it stands out as truly shocking and horrible, and fits into the context of the story.

The inevitable showdown takes place on Childbeck Hill, at the deserted home of Mr. Matsuzaki. It appears he left one particular skeleton in his closet, and those bones are still rattling rather loudly. A flashback gives us his story and why he may be the only one who can stop the slit-mouthed woman. In a totally American-styled ending, the evil continues to play rock, paper, scissors-in-your-mouth for the potential sequel. While I've often quipped "would you like fries with that" in regard to American Horror, I never thought I'd be saying it when discussing J-Horror. Times change, I suppose, and the franchising sequelization-antics so prevalent in America's horror industry appear to have spread their evil contagion, too.

The image of the slit-mouthed woman is nicely stylized for marketability also. I can see those McFarlane toys now. Horrorheads will love them; especially the realistic removable hospital mask, real fabric trench-coat, and realistic-action scissors. Now if they can toss in a voice-chip that says "Am I pretty?" "Smile!" and "Kiss my ass, Freddy" that would be perfect. Add a few mutilated children cowering in fear and you'd have an awesome playset.