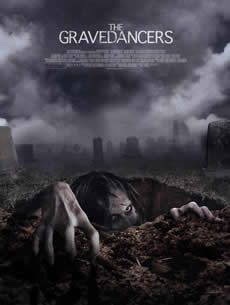 Step on a crack, break your back.
Step under a ladder, fall with a clatter.
Dance on a grave, get your ass kicked.

Zombos and I were out in the family cemetery, in the tepid air of a late summer night, prowling around for blurry apparitions to capture on video and unintelligible but spooky noises to record on our digital recorders. He was so excited after watching the new episodes of Ghost Hunters and the Haunted Collector on the Syfy Channel he went online and bought a bunch of spirit-busting gizmos.

"I think I have Uncle Clarence on the thermal imaging scope," he said with glee. He pointed to a pink blob in the lower left corner. It was bent over at an odd angle; Uncle Clarence was always bent over from the weight of his hunchback.

"That's your thumb," I finally said. He grunted his disappointment and moved his thumb out of the way.

"Hullo, what's that?" I pointed to a dark shape floating just above Cousin Shoemaker's tombstone. The Ghost-Mart Smart-Budget EMF reader's numbers were jumping into the high digits.

We cautiously approached the globular shape that quietly hovered above the grave.

"Quick, ask some questions so we can capture its voice on the digital recorder," Zombos directed.

"Are you Cousin Titus Shoemaker? If so, where did you bury your fortune in the mansion? And how much is it worth? And is it true that Aunt Matilda hit you in the head forty-one times with that meat cleaver Chef Machiavelli still insists on keeping in the third drawer to the right of the triple sink just because you snored?"

"Oh, bugger!" Zombos had gotten close enough to touch the floating shape. "It is not ectoplasm. It is a Barney helium balloon."

"Damn." I turned off the digital recorder. "Well, perhaps we should just watchThe Gravedancers instead?"

Zombos looked at me. I looked at him. We looked around the empty cemetery. We kept looking back at it as we ran to the safety of the mansion.

While the smartly dressed paranormal investigators in The Gravedancers aren't exactly the plumbers by day, fearless supernatural inquirers by night kind, they still manage to do a few things right. But in the end, when you go dancing on other people's graves, you might as well stick a "Kick Me" sign on your back and be done with it.

The nearer to death among you may remember the 1942 Lights Out radio drama, Poltergeist, about the terminal effects from gravedancing. Building on this premise, Mike Mendez' movie is a tidy little romp in the spirit world that draws inspiration and visual styling from such gems as Night of the Demons, The Frighteners, and Poltergeist.

Unfortunately, it also draws a bit too much from the over the top remake of The Haunting, and that's where it loses the scary-cred it builds up in the first two-thirds of the story. For a low-budget fright-flick, however, it's stylish, has good acting, and has coherent—if not always best for the situation—dialog. Toss in its few good shocks and you've got a good ghost flick to add to your Halloween viewing list.

Three long-time, but haven't-seen-each-other-in-a-while friends get together for another friend's funeral. Oddly enough, the funeral has nothing to do with the now obligatory horror movie shock opening in the first few minutes. It's thrilling and chilling, but don't expect it to tie in anytime soon with the rest of the story. At the goading of the friend who's yearbook photo has noted "voted the most likely to succeed at Kinkos," they wind up back at the grave in Crescent View Cemetery, late at night, and stone-cold drunk.

It reads to party all night, and dance over as many graves as possible to loud rock music.

Their luck goes downhill from here. The camera nervously peeks around at the shocked tombstones as our bunch, led by that Kinkos ne'er-do-idiot, dance on the resting spots of the town's worst former inhabitants: an incendiary child guilty of multiple homicides; a pillar of the community who tortured many women tied to it; and a piano teacher who chopped up her lover when not playing Chopin; making that a neat one ghost each for them and their death-mocking dance.

In the weeks that follow, creepy sounds, flickering lights, doors opening on their own, a frightened cat, and a piano playing by itself spook Harris McKay (Dominic Purcell) and his significantly-spooked other, Allison (Clare Kramer). They follow up with Kira, another gravely afflicted cemetery party-goer, who has been having her own ups and downs with a spirit that alternately bites and molests her. They bring her to a hospital; a setup for a wonderfully frightening encounter with a spirited gurney.

Their third dance partner, that Kinkos guy who got them in this mess, has been having some hot issues of his own. When they go to visit him, he's already called in the local college's paranormal investigation team (all the rage now, really) headed by Vincent (Tcheky Karyo), and his comely assistant, Culpepper (Meghann Perry). It takes the investigators little time to figure out it's the old dancing-on-graves curse at work, which persists from moon to moon, or until the cursed person dies. I bet Jason and Grant from TAPS never heard of that one.

So it's back to Crescent View Cemetery, in the dead of night (of course), to rebury the remains of the antagonized ghosts in hopes of putting them to rest—again. What ensues is a nicely choreographed example of why you shouldn't jump into graves with very spiteful ghosts itching to bury you, too. It gets worse when one of the investigators decides to do something very unprofessional, leading to more animatronic special effects, surprisingly well done on such a small budget, but somewhat over the top for what started as a more intimate haunting.

Everyone regroups at the investigators' stately mansion (Jason and Grant, eat your heart out), but soon they're bickering over who slept with whom and arguing over old relationship issues. You know, the sorts of things every potential victim in a horror movie does just before he or she dies. An unexpected rearrangement of the landscape keeps them locked in the mansion, trying to fend off their three ghostly antagonists who keep coming on strong.

The climax is a heady mix of really big, ghostly CGI animation, a determined floating bloody corpse wielding a very sharp axe, and a skillful product placement for HUMMER—I'd like to see a Prius save the day like that.

After this movie, I guarantee you'll not dance on any graves any time soon, and you'll pay more attention to Jason and Grant on Ghost Hunters, looking for as many useful pointers as possible to ward off vengeful spirits.