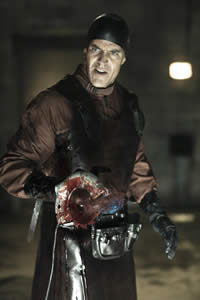 I wanted to take a long hot shower after watching Hostel: Part II. I felt dirty. The horror genre is a distasteful, discomforting one to begin with; that's what sustains it. It's supposed to both titillate and frighten us at the same time with shocking images, unpleasant sounds, and extreme, sometimes disgusting, subject matter. But then there's Eli Roth's Hostel series, rolling up all those elements into a nice and tidy puke-ball of horrifyingly intense and nauseating brutality. The problem is that he does it so convincingly well.

Unlike another, albeit less gruesome, torture-flick, 1970's Mark of the Devil, there are no gimmicky vomit bags to be handed out here to lighten the experience, though now's the time they'd come in handy. Time was, you went to a horror movie to be grossed-out, but in a fun way. Thrills and chills, and some red spills, but ha-ha, just make believe your sick and keep that vomit bag pristine because it makes a wonderful souvenir.

Of course there are many horror films, from grind-house to art-house, that do their best to make you upchuck your last meal or your complacency, but Roth's fictional Slovakian village, filled with menacing townspeople—including the children—pushes your complacency right out the window, then stomps on it's fingers as it desperately dangles from the windowsill trying to avoid that long fall downward.

This time around, our soon to be tortured tourists are three girls; two hot babes, one tepid one, and all three acting like babes in the wood. Unfortunately, the wood they choose to hang out in is inhabited by human wolves involved in one hell of a local tourist economy.

Roth fleshes out his characters a little more this time around, as well as show the rich brains and black-clothed muscle behind the thriving tourist business, where potential victims are auctioned off to the highest bidder using ubiquitous technology and wanton desire. This is perhaps the most disquieting and chilling part of the Hostel franchise: big business drives the mayhem, the soullessness, the anguish, much as it does in the real world. And with all that burning of left-over body parts and personal belongings, the business-minded bastards of Roth's sleepy little Slovakian gateway to hell are contributing to global warming as if there's not a care in the world. A little too much reality for me there.

Another disturbing aspect here is that the whole town knows what's going on, but since it benefits the local economy, mum's the word. Here is where Roth's story transcends the direct grind-house approach and, consciously or not, thumbs its nose at the business trends that permeate our waking lives, promising us so many wonderful todays if we just don't worry about our tomorrows. Roth paints a microcosm of the malignant aspects of high-finance and it's one-dimensional focus on profit carried to extremes: his Slovakian village is the perfect model of an efficient economy, whose "employees" and "management" see nothing wrong in handling the human commodities they profit from. This makes Hostel: Part II much more frightening  than all the gore you can stuff in a garbage bag.

The girls run into trouble pretty quickly, mainly because they are looking for it. After a harrowing experience with a bunch of guys they meet during a train ride, they run—again—into the art model that posed for them during class. She's been ingratiating herself with them, and now, although they know nothing about her, they jump at the opportunity to go where she tells them. Are American tourists that stupid? I shudder at the thought.

When the girls check into that Slovakian hostel, their passports supply the photos necessary for the bidding war to start. Their new buddy tells them about the Harvest Festival shindig, and the real harvesting begins with each girl making very serious mistakes in judgment and succumbing to their desires during the night's festivities.

Unlike the first film, the other side of the torture-chair is shown as we meet and greet the winning bidders, two businessmen with families and a yearning for deadly secrets. They're given restaurant-styled pagers to alert them when dinner is ready. Choosing their implements of torture like they are going down a supermarket aisle, and eagerly donning their fetishistic leather aprons and masks as they do their business suits, the impression is one of sublime obscenity, or your typical team-building sales meeting.

To make matters worse, Roth ups the ante on obscene gore. While it can be said that other films have been more revolting in their depictions of chunky, oozing, and squishy gore, it is Roth's contextual use of it in carefully orchestrated scenes of bondage, whether trussed upside down stark naked, or bound helpless to a table or chair, while vile and mind-numbingly painful atrocities are committed on a living body, that punish us to watch. One particular scene I still can't get out of my mind involves an unwilling dinner guest who is on the menu, not looking at it.

I wonder if Roth felt like taking a long hot shower after writing and directing Hostel: Part II. I hope he did.