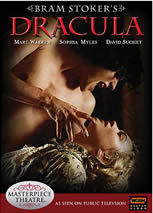 From the Journal of Iloz Zoc

Feb 11. Westbury— Oh, the horror!  In this age of reimaginings and adaptations based on mere fancy and egotistical hubris, to be subjected to this singular carriage-wreck of a teleplay is more than I can bear. What mind could conceive such a thing; to put pen to paper with such disregard, such wretched villainy in this version of Dracula, and to put Bram Stoker's name upon it?

I hear the pounding now, like the beating of my racing heart, as he pummels the lid of his coffin, seeking retribution for this vile act.

I feel faint. I must lie down.

Excerpt from the front page of Victorian Variety — Who Do This Hoodoo? A Stinkeroo.

Ninety minute walk-through-park story has Lord Holmwood (Dan Stevens) contracting syph from over-sexed Dad, forcing him to postpone nuptials with hot-to-trot Lucy (Sophia Myles) as he goes off to find cure from undead count using social ties with Brotherhood of the Undead, headed by a chap named Singleton, who dresses better than the count, clothed in simply gorgeous Freemason, secret society-style robe and hat.

Using Singleton (Donald Sumpter) as his go-between, Holmwood foots bill to have Dracula take longer than three-hour cruise to England aboard doomed ship Demeter. Due to minuscule budget, not much happens during faithful trip as weather doesn't get rough and the tiny ship doesn't get tossed.

Why does every movie miss potential, terror-filled carnage aboard the Demeter? Then again, why bother writing this snooze-fest?

Bat-man (Marc Warren), smitten by Harker's snippet of Mina's (Stephanie Leonidas) hair, decides to woo said Mina while chewing on Lucy's neck as an aperitif. Lucy, who's not been getting any lately, is only too anxious to oblige, sending would-be paramour Dr. Seward (Tom Burke) into spasms of impotent rage; or something like that, as his acting is a shade past monotone.

Meanwhile, at the Brotherhood of the Undead's office, Singleton and another member profess their adulation for the undead guy, only to have him wring their necks. Drac keeps pining for Mina, while Holmwood and Seward pine for Lucy, and this reporter pines for the big stake-o' pine in Drac's chest to end this unbelievable tedium.

In the basement, Seward finds Van Helsing—cowering un-Van Helsing-like—in a corner. David Suchet plays Helsing like a man running for the bus. Wisely choosing to hide his features in a white wig and beard, he routinely pulls out the crosses and stakes for the big showdown.

Gearing up for the anxiously-awaited—by this reporter—ending, Helsing, Seward, and Holmwood head over to Lucy's vault in order to test the sharpness of their stakes. Puzzlement here as to why Holmwood doesn't just let Lucy bite him in the neck to cure his syphilis—the whole reason for this mess—but why bother with good scripting so late into the story? With amazing ease, Holmwood plunges a large stake into Lucy's chest and she goes down for the count.

Speaking of the count, next stop is Drac's place of unrest, and after a little polite mayhem, Drac and Holmwood wind up dead (with Drac presumably deader than he was), mercifully ending this life-less version of Bram Stoker's classic.

Or does it? In a sequalization-antic, Drac appears to not be really dead after all.

Lord help us all if there’s a sequel.

Telegram to David Suchet from his agent, undated.

Hollywood—Look David, if you insist on appearing in these things, you better wear a white wig and beard to hide yourself. As your agent, I only want what's best for your career, and believe me, this ain't it. STOP

But go ahead, do whatever you think best; I can only recommend what I believe to be a saner course of action for you. STOP

Feb 12. Westbury—I feel much better now. Chef Machiavelli brought me a nice cup of chamomile tea to calm my nerves. The life of a movie reviewer is not an easy one, and there are moments of real terror as well as joy. Why attach Bram Stoker's name to such a cinematic detour as this version, nay, this base use of his characters in such a folderol? Dracula himself is nothing more than a mercurial, long-haired rock star impersonator, showing no cunning, no evil wisdom garnered from living for centuries. And where is his foreign accent? And how can you relegate a novel, full of terror and action, to a mere ninety minutes?

Sadly, commercial interruption here would have been much appreciated.

Worst of all, key dynamics of Stoker's masterpiece were removed entirely, or presented in abridgment.

Harker is dead, and does not return to lead the fight against the count, and the sweep of action from Transylvania to England and back to Transylvania is gone. Van Helsing, once the self-assured powerhouse, the catalyst for action, is nothing more than a shell of his former incarnations.

Subtexts of vampiric sensuality and Victorian prudeness are lost against the flagrant syphilitic-focused plotline. Dracula himself is relegated to a supporting role, and displays no charisma, no depth, no fear-inducing terror. More effort was spent on his hairdo and self-conscious preening than playing an undead creature that has survived for centuries, knowing only the lust for blood.

Curse the day I started using TiVo, and the ease at which one can watch such an abomination, unsuspecting.