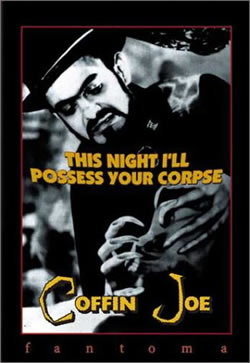 There is a method to director/persona Jose Mojica Marins' madness. Ze do Caixao, or simply Coffin Joe to his American horrorhead fans, is a sardonic and sadistic Nietzschean-styled anti-hero, whose mundane heretical beliefs lead him to humiliate and torture countless victims — in wonderfully gruesome and fun ways — yet sanctimoniously cherish and laud over children at the same time.

There is something strangely entrancing in watching the machinations and sardonic deeds of Coffin Joe as he painstakingly struggles to find the perfect woman to bear his perfect son, while gleefully terrorizing and murdering everyone else in the process.

Coffin Joe, a village undertaker who dresses the part with dark top hat and billowing cape, is introduced in Marins' first film, At Midnight I’ll Take Your Soul. The archetypal fortune-telling witch, as well as Coffin Joe himself, deliver monologues at the beginning of the film; the witch, to presage future events, and Coffin Joe to rant about his philosophy of heresy and superiority. The spook show styled sets, chalky opening credits, and grainy chiaroscuro blend together to create a moody and surprisingly effective low-budget film. The ease at which Coffin Joe slips into serial killing mode is startling, and he easily can be seen as the nascent model for later nihilistic anti-heroes of the killing-screen, including Hannibal “The Cannibal” Lecter, and Freddy Kruger.

In one memorable scene that will have you looking over your shoulder and itchy all over, lots of big, hairy spiders crawl over sleeping nubile women. Eventually, the torch-wielding village mob, fed up with Coffin Joe's deadly antics, finally hunt him down through a sticky swamp at the end of the film.

"You didn't mention the third film," said Zombos. "It's a trilogy, you know."

"Will you stop interrupting me when I'm trying to get a post out? I know there's a third film. It's called Awakening of the Beast. It's Marins' cinematic LSD trip with Coffin Joe gloating in the background as people succumb to drug use and perversion. I just haven't seen it yet."

I cupped my hand to my ear. "I think I heard your son calling for you. Weren't you supposed to take him to see Night at the Museum?"

Zombos' face suddenly turned to that deer-in-the-headlights look I knew so well. He hurriedly left the room to find a hiding place. He apparently forgot that Zimba had taken Junior to see the film. I felt guilty playing with his spotty memory. A little. 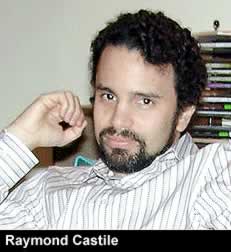 Raymond Castile knows Coffin Joe well. Not only did he create two websites devoted to his favorite Brazilian undertaker, he also bears an unsettling resemblance to him. So much so, in fact, that director Marins' offered Raymond the chance of a lifetime: to play the dapper but deadly iconic undertaker in Marins' upcoming film, Encarnacao do Demonio.

Since Raymond and I both belong to the secret Yahoo Group known as the Universal Monster Army, and not being one to miss a golden opportunity, I asked Raymond to join us in the closet for a little chat.

First, can you give us a little background history about yourself and your professional career? When did you first discover that you were a horrorhead?

I am a reporter for the Suburban Journals in St. Charles County, Missouri. Before entering journalism, I was a small-time video producer. I created a documentary about toy collecting called In Love With Toys. I mainly shot industrial videos, like product demos, and event videos, like weddings. Besides the toy doc, the only "cool" video I produced was a promotional piece for Terror Visions' haunted house. It ran about 15 minutes long and had some snappy editing and lots of monster footage. But I could not make any money off video production, so I switched to journalism. I don't make any money off journalism, either, but at least I feel like I am doing some good in my community. A lot of the stories I write produce positive real-world results. I'm sort of a social justice advocate. I write a lot about poverty and homelessness, tolerance, people fighting diseases and other social issues. I also write about education. 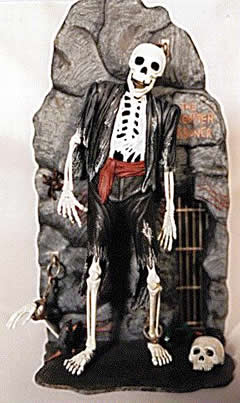 I have been a "horrorhead" since I was a child. I learned to read browsing the pages of Famous Monsters of Filmland magazine. As a kid, I stayed up every Friday and Saturday night watching monster movies. I still do! I find that 2 a.m. is the best time to watch a horror movie. I played with monster action figures and built Aurora monster models.

When the neighborhood kids got together, we wouldn't play Cowboys and Indians. We would play monster games! I would always be the monster, mad scientist, or both. We would build laboratories in the backyard or on somebody's porch. As the mad scientist, I would create some crazy monster that would go out of control. I might play the monster myself, or we would build some big puppet. Yes, we were 8-year-old kids building "animatronic muppets" to be the monster in our games. We went all-out! If we were too lazy to do all that, we would just go into the woods and play Bigfoot. I would be the Bigfoot, of course.

You are the curator for The Gallery of Monster Toys, one of my favorite websites. Why did you set up the website, and what is it about the horror genre that fascinates you in general, and horror-related toys in particular?

I created the Gallery of Monster Toys in 1996. Last year was the 10th anniversary, but I was so busy with other concerns that I let it slip by unnoticed. The counter hit 300,000 sometime around Christmas. When it hits a half-million, I need to do something special to commemorate the milestone. I don't see many collector sites or monster fan sites getting 300,000 hits, so I think that's something to crow about.

When I built the site, there was virtually no information about monster toys on the Web. Now there are all kinds of sites. But for a long time, mine was the only one. To make a movie analogy, the Web was still in its black-and-white, silent era in 1996. My toy site was like an early talkie with two-strip color. It looks primitive by today's standards. But at the time, it was something different. I just wanted to popularize something that I cared about. When something excites me, I want to make other people excited about it. I want the whole world to get excited. If it's something esoteric, so much the better. If people can see the value in something obscure and kooky, then maybe they can see the value in other neglected things.

The site was an extension of a series of articles I wrote in 1993 for Action Figure News magazine. To this day, most of the photos on the site are the same ones I shot for those 1993 articles. It's about time for an upgrade! But every time I try to rewrite it, update it, change it, I stop myself. Nobody likes it when Disneyland updates its old rides. That's how I feel about updating my site. I like that it's the same old site, year after year. On the Web, change is the norm. I don't want to be normal. These toys don't change, so my site doesn't change. It's like a vampire that just rests in its coffin, century after century. The world around it evolves, but the vampire stays the same, eternally.

What fascinates me about horror? I guess it feels more true-to-life than other genres. I've read a lot of pretentious explanations about why people like horror. I don't want to pile the heap any taller. If you like horror, great. If you don't, watch something else.  Just don't discriminate against horror fans. I think there is real prejudice out there against people who openly embrace horror. It makes some "respectable" people shy away from talking publicly about their fandom. That is a shame. No one should have to think twice about talking about what they love, just because some idiots don't get it.

You and I also share a passion for Jose Mojica Marins' surreal Coffin Joe character, Ze do Caixao. What is it about Coffin Joe that made you devote two websites to him and his creator? 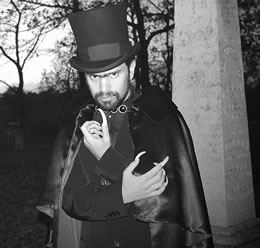 Even though I am a square goody-two-shoes idealistic softy, there is something about Coffin Joe that I identify with. He is an outcast, alone in the world.  The director Guillermo Del Toro said that fascism is born when people who are marginalized come to feel they deserve the very best. We can see this throughout society. When people are discriminated against, marginalized, belittled, they reach a point where they no longer crave equality or justice. They want superiority and vengeance.

Coffin Joe is so alienated and psychologically scarred that it is not enough for him to feel he is as good as everyone else. He wants to prove that he is the superior being. Since the world has hurt him, and he feels he did not deserve to be hurt, the world is obviously evil. Since society disagrees with his ideals, society must be stupid. He is the model of the victim becoming the victimizer. He will save the world by destroying it. He is the Phantom of the Opera, Hannibal Lecter, Darth Vader, Dr. Phibes, Capt. Ahab and a long list of antiheroes that stir a dark, rebellious passion within us. As evil as Coffin Joe is, he is still a victim, an underdog, a broken little boy throwing a tantrum against the world.

Aside from Coffin Joe, which horror films are your favorites? Why? And which actors?

Lon Chaney, Sr., is one of my favorite "horror" actors, though most of his films would not be classified as horror. I think of Chaney as the Johnny Cash of cinema. He is always portraying the underdog, the doomed, the cursed, the hopeless character who lashes out as the world slowly crushes him. Yeah, I like Johnny Cash -- but he didn't make any horror movies. Drat.

As for films, my favorite is probably King Kong. I love Bride of Frankenstein, Abbott and Costello Meet Frankenstein, Curse of the Werewolf, Psycho, Night of the Living Dead, The Wicker Man, The Abominable Dr. Phibes, Jaws, The Fly (86), Silence of the Lambs. I love Lon Chaney and Vincent Price. 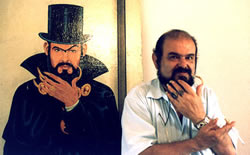 In 2006, as documented on your Diary do Demonio website, you lived your dream of playing a young Coffin Joe in Marins' Encarnacao do Demonio. Can you describe what it was like working with director Jose Mojica Marins? And can you give us a rundown on what this feature film is about?

The film is about Coffin Joe being released from prison after 40 years, then resuming his quest to continue his bloodline by having a son. It's hard for a ghoul to find the right gal, you know? For most people, the road to having children involves dating, courtship, engagement, marriage, lamaze classes, etc. For Coffin Joe, it involves abduction, torture, murder, mutilation, madness, ghosts, hallucinations and mortal enemies fighting to the death. Life is just a little different when you're Coffin Joe.

Finally, what question would you like to be asked, and what's the answer?

If Mojica asked me to return to Brazil for another Coffin Joe gig, I'd say yes!

Posted at 11:17 AM in Reflections | Permalink