Movie Review: Jack Frost (1996)
No Frost on This Pumpkin 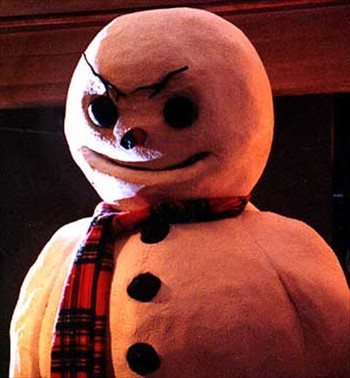 As another year begins its slide into posterityI suppose I should at least write up some resolutions I can judiciously ignore throughout next year. I’ll make my first resolution to do that — perhaps next week.

I recently watched Jack Frost on DVD — hey, there's an important resolution right there: make sure to watch more GOOD horror movies. Now that was easy. I made the mistake of listening to Yahoo Group members' recommendations on this one and — wait a minute, there’s my second resolution: do not listen to movie recommendations garnered from trolls in chat groups. My word, coming up with New Year resolutions is easier than I thought.

While the idea of a serial-killing snowman may be novel-looking on paper, its execution, which could have been on a par with Shaun of the Dead in wit and visual humor, falls far short; and you can't blame it on budget limitations, either. In the hands of a Roger Corman or Troma’s Lloyd Kaufman, low budgets ignite creativity with cheap but imaginative set pieces and self-indulgent—wink, wink-- scripting. That didn't happen here.

Whenever you combine the elements of comedy and horror you have to decide how far to go in each direction. Should it be a parody, a satire, tongue-in-cheek, or a mix of these approaches? What visual framing will tone your choices and how will the characterizations and actions move the story to highlight them, and keep funny-bone chuckling and shinbone trembling with fright?

Uncle Henry’s inappropriately risqué bedtime story voiceover to his young niece sets the mood. As he horrifies her, we, very slowly, look at ornaments on a Christmas tree, pausing to see the movie’s credits written on each one. At first a novelty, it becomes tiresome as it drags on. Uncle Henry's story introduces Jack Frost (Scott MacDonald) the criminal as he’s conveyed to his execution in a van aptly titled with Troma-like subtlety, "State Executional Transfer Vehicle."

A collision with the also aptly titled "Genetic Research" truck reveals the miniscule budget: quick cuts cover up the absence of showy car-explosion pyrotechnics. Jack gets doused genetic research liquid, turning him into a wise-cracking, not very jolly, serial-killing snow cone with a button nose. A pseudo-scientific explanation is later given by one of the Genetic Company’s agents to explain this transformation, but it’s all intentional nonsense unintentionally witless.

Now to Snowmonton, a small town where an annual snowman contest-- hey, wait a minute, there’s that budget drain again: no snow! There are scant piles of flaky fake snow here and there, but the few snowmen in the contest look pitiful. How the townsfolk made them is bewildering: there’s no snow in Snowmonton. This might have been funny if directed with that thought in mind, but director Michael Cooney’s thoughts are on rote murder instead. We don’t see the first murder, just the victim’s discovery, with us looking from behind the old man’s spiked-hair-frozen head at three dismayed police officers. They are looking down at his icy body seated in a rocking chair. One of the officers absent-mindedly rocks the chair with his foot. That’s funny.

No reason for why this poor local yokel was murdered is given, but being a horror movie, who needs reasons, right? Only escalatingly gruesome and growing body counts matter. Jack Frost the snowman makes his appearance in a flaky-fake foam rubber suit. His oddly designed facial features don’t do much for either the comic or horror mood he’s trying to project.

I admit to the guilty pleasure of finding humor in the second murder, where Jack cuts off a bullying boy's head with a sleigh, but his grieving parents’ acting is so bad the humor is quickly lost. Luckily that acting doesn’t go on for long; mom is viciously dispatched by Jack using a Christmas tree’s string-lights and broken glass ornaments to shut her up. The attack starts funny, but heavy-handed direction turns it into a nervous laughter situation--something that looks funny but isn’t. Watching her face repeatedly mashed into the shards of glass while Jack makes merry quips IS NOT FUNNY. When her body is discovered, we see the three, still-bewildered, police officers through the blinking string-lights wrapped around her. The humor falls flat because we suffered through her sadistic murder. The movie’s tongue-in-cheekiness, its balancing of humor and horror, tips out of sensible control after this, becoming a slasher-formulaic catastrophe without focus.

A convenient plot device to make Jack more mobile has him change from snow to water as needed. How he moves along in the snow without legs is still a puzzler. Using his solid to liquid trick, he commits a rape and murder. I assume the scene looked awfully clever in the script, but to watch it made me scratch my head wondering what they were thinking. When Jack starts shooting icicle daggers from his body to gleefully kill, I found it difficult to keep watching. Cooney loses his street-cred completely at this point, making Jack Frost a movie for people interested in novelty killings more than coherent story-telling or characterizations. Sadly, the horror genre is full of such fans. Jack slaughters an entire family while cracking sarcastic one-liners all the way, then goes after Sheriff Tiler (Christopher Allport), the man who sent him to prison. More mayhem follows. The Sheriff’s habit of losing keys at critical, key-needed-urgently moments becomes tiresome, aerosol cans and hair dryers magically appearing in quantity to fend off Jack is humorless, and the preposterous, but imaginative, climax involving an anti-freeze filled truck bed and amazingly good timing to save the day doesn’t make up for the time wasted leading up to it. The townsfolk bury the anti-freeze bottles that now contain Jack Frost; of course, Jack will return in an even more cheaply conceived sequel.

While this is not a good horror movie by any worthwhile stretch of critical assessment, it does provide an excellent primer for budding scriptwriters on what you should avoid when attempting a horror comedy. This movie doesn’t deserve its cult status because it simply doesn’t earn it.