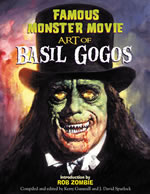 So there you stand, scratching your severed head in dismay; what gifts to get that ho-ho-ho-so difficult horrorhead in your family? Why suffer the hordes of zombiefied holiday shoppers, overwhelmed store employees, and bargain bins of the damned when you can sail down the Amazon in shopping comfort while sipping your favorite frothy beverage? To help you with your gift buying, Zombos Closet presents the first annual list of bloody best books any fan of horror cinema would die and come back for, again and again. 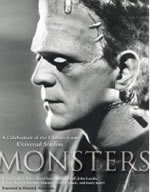 For the classic horror enthusiast, Monsters: A Celebration of the Classics from Universal Studios, is an over-sized, hard-covered licorice treat of photos and essays paying tribute to the unforgettable creature features of Universal Studios. Beginning with The Phantom of the Opera, and ending with The Creature from the Black Lagoon, both moldy oldie and glowingly young horrorheads can relive the glory days of the horrors that started it all.

In the monster-sized Hollywood Horror: From Gothic to Cosmic, author Mark A. Vieira tosses in the atomic and the psychic also to include the fright factory films of Universal Studios, and the post-atomic age drive-in horrors of the 1950s. From Val Lewton to Roger Corman, and on up to HAL 9000, the electronic monster in 2001: A Space Odyssey, Vieira provides an interesting, informative, and eye-poppingly photo-illustrated horror film history that would delight any horror fan. My favorite photo is a full-page shot of Ben Chapman in full costume as the Creature from the Black Lagoon, doing a little soft-shoe dance between scene takes.

More 1950's monster and mutant mayhem can be enjoyed by reading D. Earl Worth's Sleaze Creatures: An Illustrated Guide to Obscure Hollywood Horror Movies 1956 - 1959. Sure, these cheesy-good, could-have-been-a-B-Movie wonders are publicly derided by critics and horror snobs everywhere, but tucked away in many of their closets, to be watched only when the shades are drawn, are such gems as It Conquered the World, Attack of the Crab Monsters, and my personal favorite, The Crawling Eye.

Pop-up books are always fun, and whoever came up with the idea for doing Alfred Hitchcock: The Master of Suspense, A Pop-up Book is a wicked genius. The pop-ups for Frenzy and Psycho are my favorites. The book is a guaranteed "Wow, what a great idea; how thoughtful of you!" Now, if only they would do  pop-up books for horror and terror films more often. I drool at the thought of a Roger Corman pop-up book, or maybe even a Hammer Film's one. 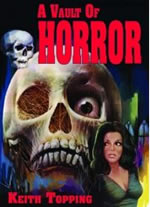 Speaking of Hammer Films, A Vault of Horror: A Book of 80 Great British Horror Movies from 1950 - 1974 by Keith Topping, is a surefire horrorhead pleaser, and Netflix-empowering stocking stuffer. Each film is covered with meticulous, often humorous commentary, arranged into categories which include Outrageous Methods of Dispatch, Logic, Let Me Introduce You To This Window, and The Story Behind the Movie.

While any one (or all!) of these books would give your significant horrorhead-other many hours of gruesome delight, if you give only one gift, make it Famous Monster Movie Art of Basil Gogos. Every monsterkid growing up in the reign of Famous Monsters of Filmland magazine remembers the stark, other-worldly and vividly saturated colors of Basil Gogos's covers. From Bela to Karloff, and Chaney to Price, his portraits of the classic monsters of our willing nightmares are forever etched into our memories. While this retrospective is a trip down memory lane for older horror fans, even the more gore-centric fan will enjoy the inspiringly eerie, impressionistic artwork.