In the cinema of the helpless, Texas Chainsaw Massacre: The Beginning reaches a new benchmark in unrelenting, stinking-bloody-abattoir-of-pain, horror. I winced at the slimy grimy blood-soaked chaos in Speak No Evil; and I squirmed in my seat during the guest suite scenes in Hostel. But I became physically ill while watching the particularly nightmarish scene in the basement, where Leatherface methodically, silently, carves a Thanksgiving turkey--except it was not a turkey he was carving up and it wasn't a day to be thankful for.

Perhaps the grainy hand-held camera scenes and tight close-ups in the film made me a little queasy to begin with. Or perhaps it was the way the camera lingers while dark, syrupy blood pours from mangled bodies, soaking into the ground, into the carpeting. I wondered how they were going to get those stains out of the carpet. They are the Hewitt family; an insane bunch of cannibalistic rednecks always playing with their dinner. I wondered if they cared about the stains at all. 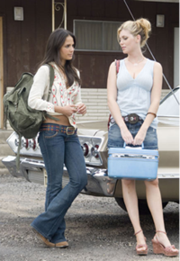 It is 1969. Two friends are taking one long, slow trip to the war in Vietnam by way of Texas. Along for the ride are their girlfriends, a few desires, and impending doom. The Hewitt family has been going through a series of setbacks as their town and way of life disintegrates around them. The meat packing plant, the town's primary source of jobs is shut down and townsfolk have nowhere else to go but away. The Hewitts refuse to leave, and young--and really huge for his age--Tommy (Andrew Bryniarski), their disfigured and misfit adopted son, refuses to stop pounding and slicing meat, whether bovine or two-legged kind.

When told he has to leave the meat packing plant, he expresses his unhappiness by wielding a sledge hammer in a brutal scene of shattered bones, muscle, and skull. Young Tommy has found a new hobby.

His stepdad has found a new hobby also. Seems the last sheriff had to leave his position rather suddenly, so Hoyt takes a fancy to the badge--after he cleans the blood off it. R. Lee Ermey plays Hoyt Hewitt with such malicious evil glee he  steals the movie. Armed with a shotgun, badge, and dark sunglasses, he's one determined patriarch who needs to put food on the table. After that nasty business in Korea that kept him alive when food was scarce, he and Tommy seem to be a match made in hell for getting that food.

In a text book example of why you should never take your eyes off the road while driving at high speed when being chased by a gun-toting biker chick, both the Vietnam-bound friends and their girlfriends are brought to the attention of Sheriff Hoyt. He takes them home to meet the family.

The truly scary thing about dysfunctional families in horror films is that they always function well together--in that insane, clannish us against them kind of way. Mama Hewitt and Uncle Monty (Terrence Evans) go along with Hoyt and Tommy. When bodies and body pieces start piling up, they just make soup and lots of it. Poor Uncle Monty is the only one to get his comeuppance in a sudden and graphically grotesque chainsaw game of long and short, but this is the prequel, of course, to New Line Cinema's 2003 version of Texas Chainsaw Massacre.

In Tobe Hooper's 1974 film that helped usher in the slasher sub-genre, the battle between the cannibalistic clan and their prospective victims was shown mostly by implication and without explicit gore. It was the non-stop, frenetic cat and mouse pacing that shifted the genre into a new direction. In Texas Chainsaw Massacre: The Beginning, the frenetic cat and mouse pacing is here, but now combined with lingering and quite disturbing scenes of very explicit gore. If it's dead, it's red: if it's not dead, it's also red. Lots of red here, oozing all over the place. According to Wikipedia, 17 scenes were cut from the final film to drop it from NC-17 to R. I think they missed a few.

A key scene in the 1974 film, which is not duplicated in the 2003 remake is included here: the family get-together for dinner. It is a macabre tableau where Mama Hewitt feeds Uncle Monty with a spoon, and one unconscious victim, one victim that's lost her mind--along with most of her teeth--and another victim have to watch their friends get bouillabaissed; only this time it is not played with black humor. Nothing in this film is played with black humor. 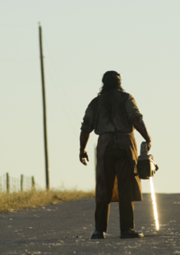 Being the beginning of Leatherface, we get to see Tommy putting on his new face--graphically. The squishing ripping sounds are quite vibrant. His first use of the chainsaw is also depicted with verve.

The ominous score highlights the mayhem and the acting is top-notch, feeding off R. Lee Ermey's sadistic Sheriff Hoyt. If you buy popcorn, I recommend you eat it before sitting down. You won't touch it while watching this film. You will also never ever be able to listen to another rendition of "Hush Little Baby, Don't You Cry" without cringing.

I have been waiting for your review of this one. I wondered if it would be the scare of the 73 or the laugh-fest of 2003. I am now eager for it, though the 17 cut thing makes me think of waiting for the DVD

--Kanrei, go see it. It definitely is an intense film. Ermey is superb. Considering what they left in, I can't imagine what terrors those 17 cut scenes contain.