I met author John McCarty (Splatter Movies) at the recent Fangoria Weekend of Horrors Convention in New Jersey, where he showed clips from his documentary, Fearmakers.

I was interested by his determination to chronicle the  creative people who have made horror cinema a passion for horrorheads everywhere and asked him about it.

What led you to create the documentary, Fearmakers?

Around 1994 or so an editor at St. Martin’s Press approached me to do a book on the directors behind the cinema’s most enduring – i.e., classic – horror, SF, and suspense films. I called the book The Fearmakers and it profiled around twenty of them, from Benjamin Christensen to Stuart Gordon. 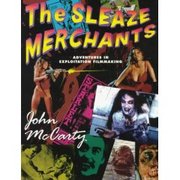 working on another book called The Sleaze Merchants suggested turning The Fearmakers into a television series. He got a Texas-based production company interested and we selected a baker’s dozen of the filmmakers profiled in the book for the episodes, and taped the series in 1996, interviewing actors, directors, film technicians, and so forth on both coasts. I served as on-camera host (a mistake I always believed) and narrator.

When the series was completed, it was shopped around, and sold well overseas, to Japan, the Middle East, France, Britain, etc, where each territory was able to substitute me with an on-camera host of their own speaking their own language. The series never received any domestic play in the States, and was never released on DVD here, probably because it lacked a “name” as host, even though the shows themselves were filled with name interviewees, from John Carpenter and Richard Matheson to Joe Dante and Stuart Gordon.

About a year ago, I contacted the production company in Texas and made a deal with them to take over the show and re-do it on my own, cutting them in on any domestic distribution deal I might make. I retained myself as narrator, but eliminated myself as on-camera host so as not to have a host at all. I’d always had a fondness for making films and not just writing about them, so I was not unfamiliar with the filmmaking and editing process. The digital realm had opened up a whole new world of possibilities for us would-be auteurs so I acquired some heavy-duty movie editing software programs and went to work, completely re-fashioning the baker’s dozen original episodes into the package of ten half-hour programs available now, which I am taking to market. It’s a labor of love, aimed squarely at us fans of the genre.

You have been working on this project for ten years. What keeps you going?

If I think something is good, I simply won’t let it drop just because it goes nowhere initially. I think the filmmakers profiled in the series, people like Tod Browning, Terence Fisher, Jacques Tourneur, are artistically and culturally important, and their work should be remembered, which is the purpose of the series. I always believed in the project and felt that just because it got no domestic play initially didn’t mean things always had to be that way.

Here’s another example. Back in the early nineties I wrote a history of the gangster film called Hollywood Gangland. It came out and was remaindered in six months for lack of sales due to lack of exposure (the publicist left just before the book came out), a total disaster for me. I had faith in that book, however, both as a book and potentially as a documentary as well. So I got the rights reverted to me, and after about ten years had passed (ten seems to be the magic number for me, doesn’t it?), I went back to the drawing board, re-focused my approach to the subject by concentrating on the American gangster picture only, gave the book a new structure incorporating much new material, gave it a new title (Bullets Over Hollywood) and took it to a new publisher (Da Capo Press).

It came out in 2003, has sold reasonably well as film books go, and indeed was made into a documentary (under the same title), produced by Hugh Hefner (a great classic film fan) for the Starz cable network, where it aired in 2005-2006. It’s even coming out on DVD in December via Image-Entertainment.

So, you see what I mean about not letting go. I’m very proud of that book; it’s much better than Hollywood Gangland, which got practically no reviews, whereas Bullets got a slew of them from places like The Hollywood Reporter to the Chicago Sun-Times, all of which were favorable and may of which were raves.

What criteria did you follow in choosing the filmmakers profiled in your documentary?

I wanted a good cross-section, from the early days of cinema to today, with the focus on the classic period, the thirties to the sixties. Particularly for horror fans of today, I wanted to show that the genre began before 1980, and to give them some idea of the shoulders on which today’s genre filmmakers rest.

What challenges have you been facing in bringing this project to completion?

The show actually came together quite easily. Nobody that we asked for interviews turned us down, and as a result we pulled off some real coups, such as Robert Wise, William Alland, and Sam Arkoff, all of whom talked to us extensively not only about the people we profiled but about their own careers as well. As all these gentlemen are now deceased, these interviews are quite special indeed. I suppose the biggest hurdle has been securing domestic distribution, but that, it seems, we have hopefully now overcome.

Tell us a little about your background and your interest in terror and suspense cinema.

Films are my passion and always have been. The first movie I recall seeing in any detail was a 1949 suspense thriller called The Window, about a little boy who witnesses a murder but no one will believe him – except the killer, of course. It marked me as a terror and suspense film fan for life.

I was born in Albany, New York in 1944, and attended Boston University, where I graduated in 1966 with a degree in communications (broadcasting & film). I went into the Peace Corps after graduation, serving in Colombia, then when I got out I went to Hollywood to “break in” as they say. There I wrote several un-produced scripts for the hit TV series Family Affair and Death Valley Days. I then worked in broadcasting and as a copywriter for General Electric Company and published my first book, about talk radio, in 1978; I became a full-time author in 1983.

Some of my other books about the world of movies include: Hammer Films (2002), The Films 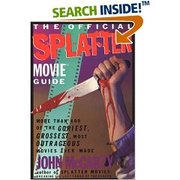 of Mel Gibson (1998); Movie Psychos and Madmen (1993); Thrillers (1992); The Modern Horror Film (1990); The Complete Films of John Huston (1992), and Alfred Hitchcock Presents (1985) – and, of course, the cult favorite Splatter Movies (1980 and 1984), which injected that term into the mainstream. I’ve also been adjunct professor of cinema in the Department of Theatre at the University at Albany and taught adult education courses in cinema – and have found the latter to be especially satisfying; I’d like to do more of it.

Do you have any favorite directors and movies? What makes them stand out for you?

Contemporary directors worth keeping an eye on: Park Chan-Wook (the Vengeance trilogy), Stuart Gordon (King of the Ants is a must), Benjamin Ross (The Young Poisoner’s Notebook), Neil Marshall (based on The Descent), Takashe Miike (Audition), Dominik Moll (Who Killed Bambi?, Lemming).

Each bears the distinctive, unmistakable stamp of its director, and is reflective of film as an art form not just a product for commerce. Each remains revolutionary in its own way and continues to be relevant; for example, you can’t look at the nightly news most nights with its images of violence on the streets of the Middle East, Indonesia, and South America, of men waving guns and emotionally scarred children mimicking their battle-scarred elders without thinking of The Wild Bunch.

When can we expect to see Fearmakers, and will it be released on DVD?

I’m taking it to market now and a deal is pending. Hopefully, you will see it early in 2007 on broadband and a variety of other outlets, including DVD.

Posted at 09:58 AM in Documentaries | Permalink

Here's one I respectfully suggest you check out and maybe add to your listings. The Shadow of the Succubus/The Eternal Thirst:Two Novels of Horror. Nothing short of excellent neo-gothic horror here.
A.J.
Frightmare Bookstore
Where The Wonders of Nightmares Do Come True