The Buck Rogers serial launched a million imaginations, along with Flash Gordon. Buck Rogers (Buster Crabbe) and his sidekick Buddy (Jackie Moran) awake 500 years in the future. They soon find the world of the future is not a happy place and jump into action fighting Killer Kane (Anthony Warde). All this will be familiar to fans of the 1979 television series starring Gil Gerard (well, except for Buddy, who was replaced by Twiki (Felix Silla), the diminutive robot). But Buster Crabbe, who played Flash Gordon, was the first Buck, and this serial is a lot of retro fun. 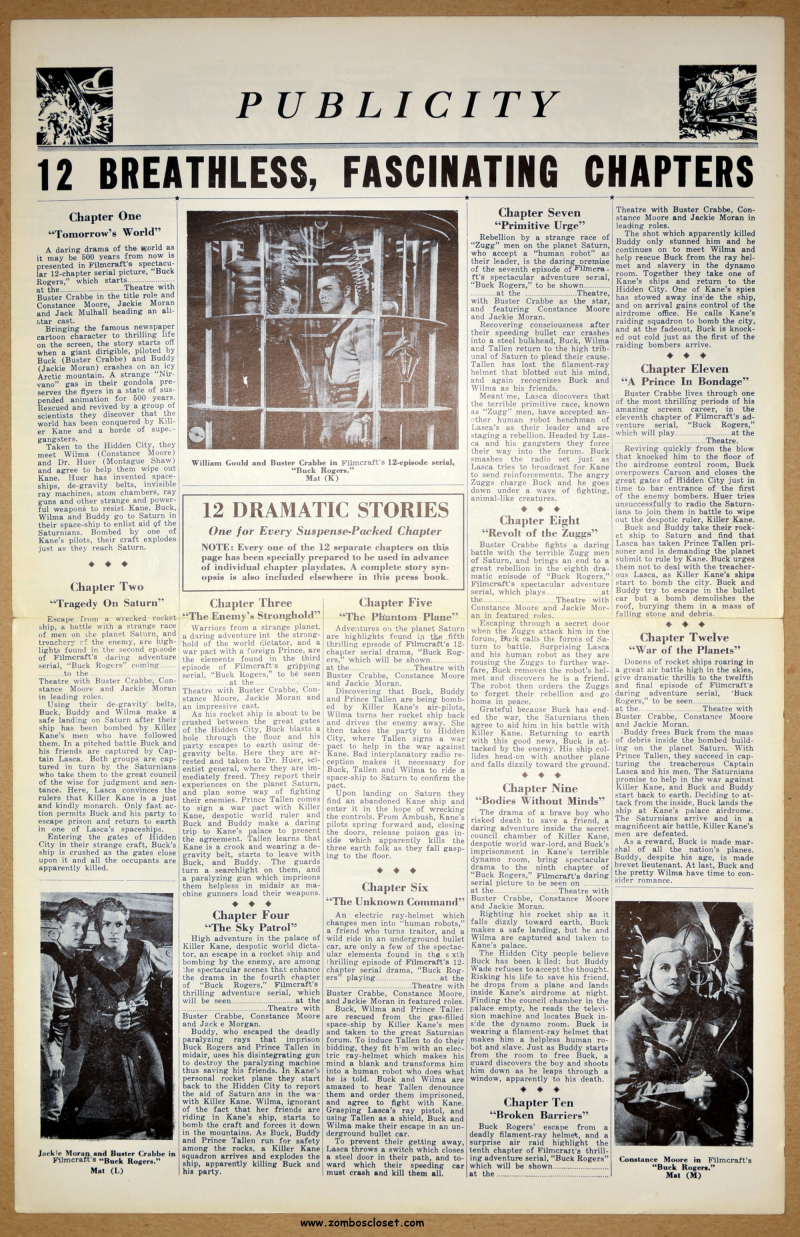 I'm not sure how singing and cowboys became a thing for movie fans, but here's Tex Ritter's Sing, Cowboy, Sing. Also, it was always important for a cowboy to have a special horse, and here it's White Flash. Of course, Gene Autry's Rudolph, the Red-Nosed Reindeer topped the charts in 1949, so there's something to singing cowboys for sure. 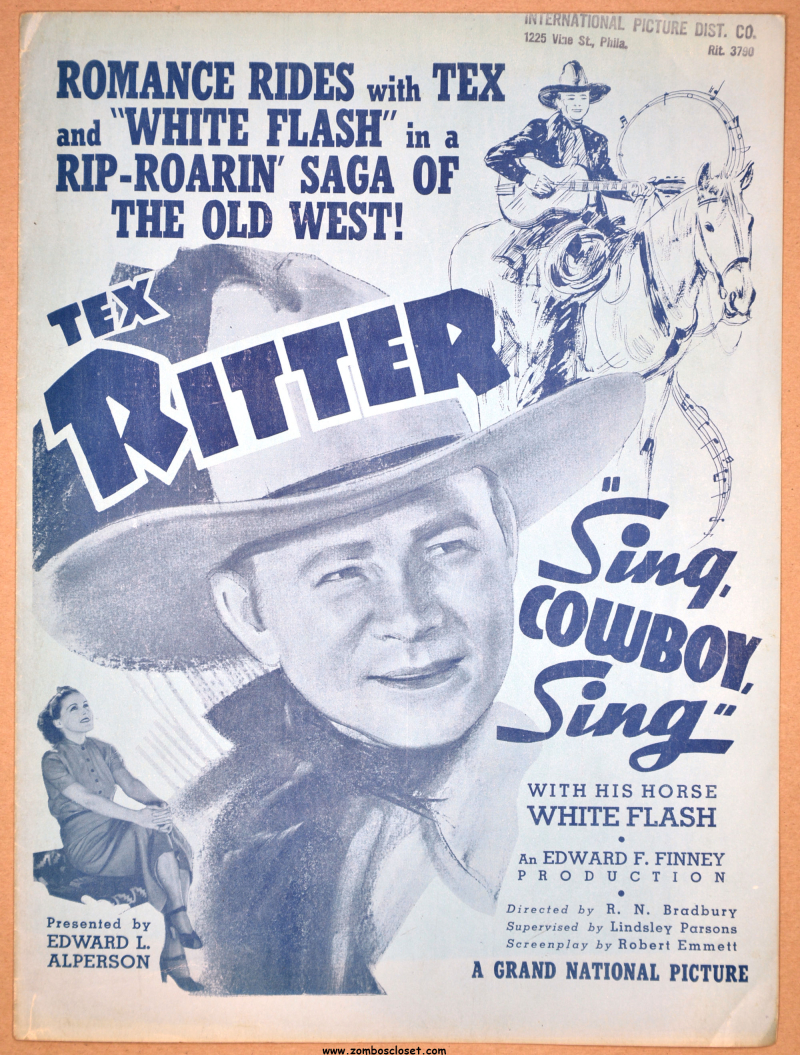 Fantastic special effects and fast pace keep this horror science fiction movie still enjoyable to watch. Wikipedia mentions it's the first American horror movie to use the three-strip technicolor process.  Albert Dekker is especially sinister and dangerous as a scientist with no moral center. The colorful poster art uses Dr. Cyclops and Doctor Cyclops in its titles. 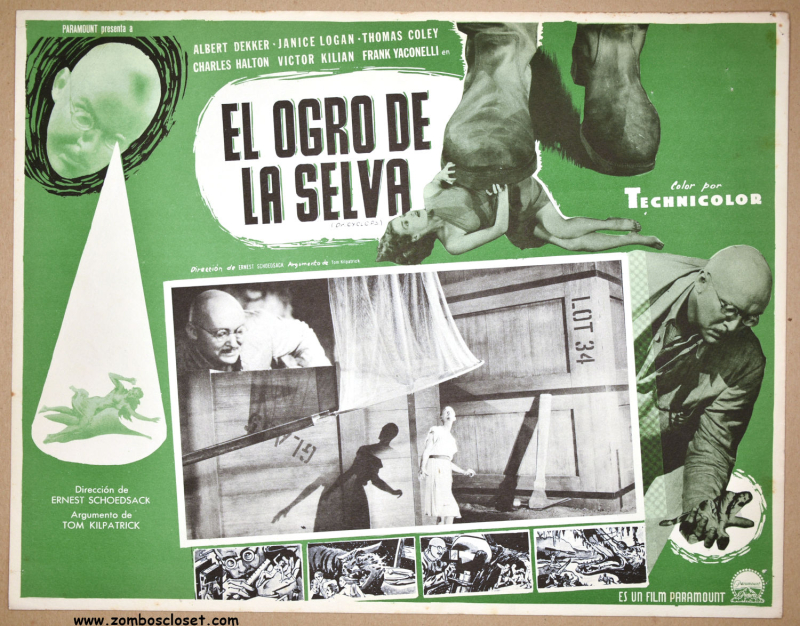 A lost silver mine, a cowgirl in need, and a gang of ruthless outlaws. Buddy Ebsen provides the comic relief. Saddle up pardner and let's getting riding! Abbott and Costello weren't the only comedians to romp around with monsters. 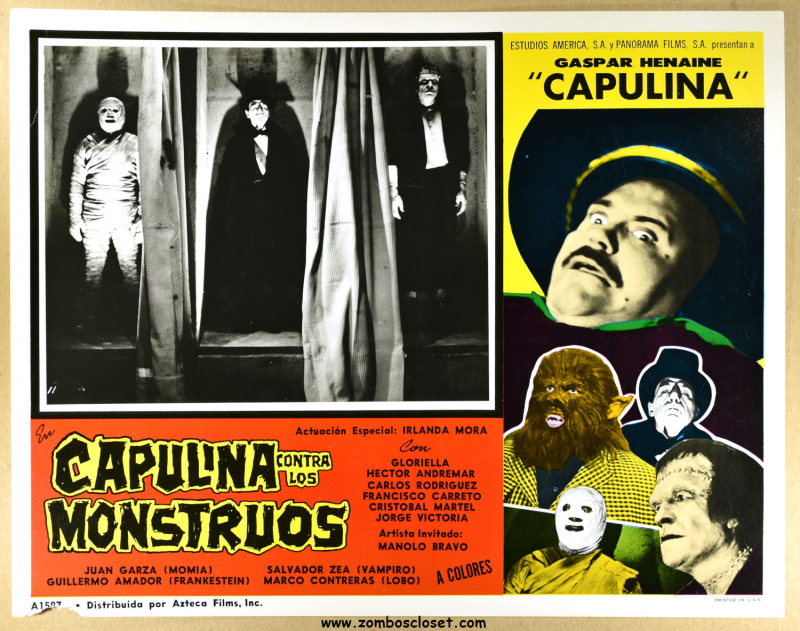 Another Monogram Pictures distribution, Rock River Renegades stars Ray Corrigan, who performed many ape costume roles through the 1930s and 1940s. He also played the creature stowaway in It! The Terror from Beyond Space. 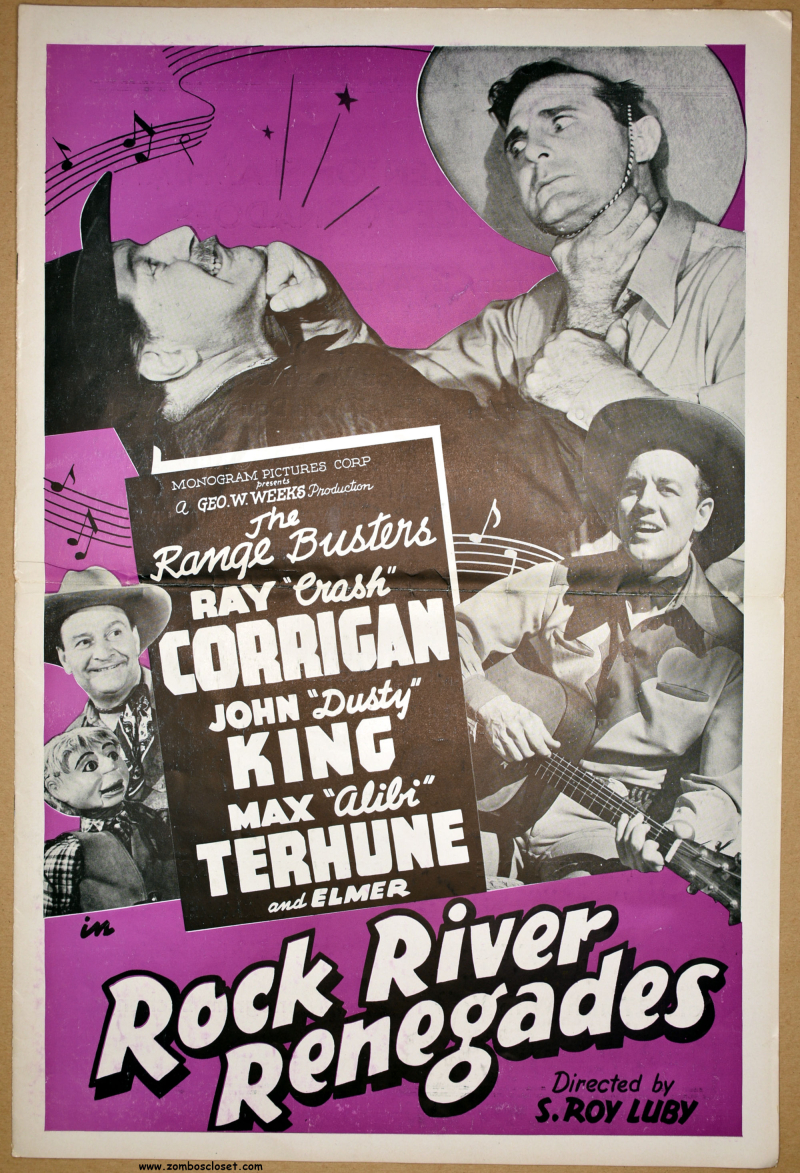 The Ghost That Walks Alone (1944) Pressbook

Here's another ghost-inspired crime comedy (cromedy?) from Columbia Pictures. Some pages are out of order but this 8 page pressbook is complete. The 1940s saw a lot of movies using a ghostly theme in storyline or title or both. This one seems to use it mainly in the title, sadly. 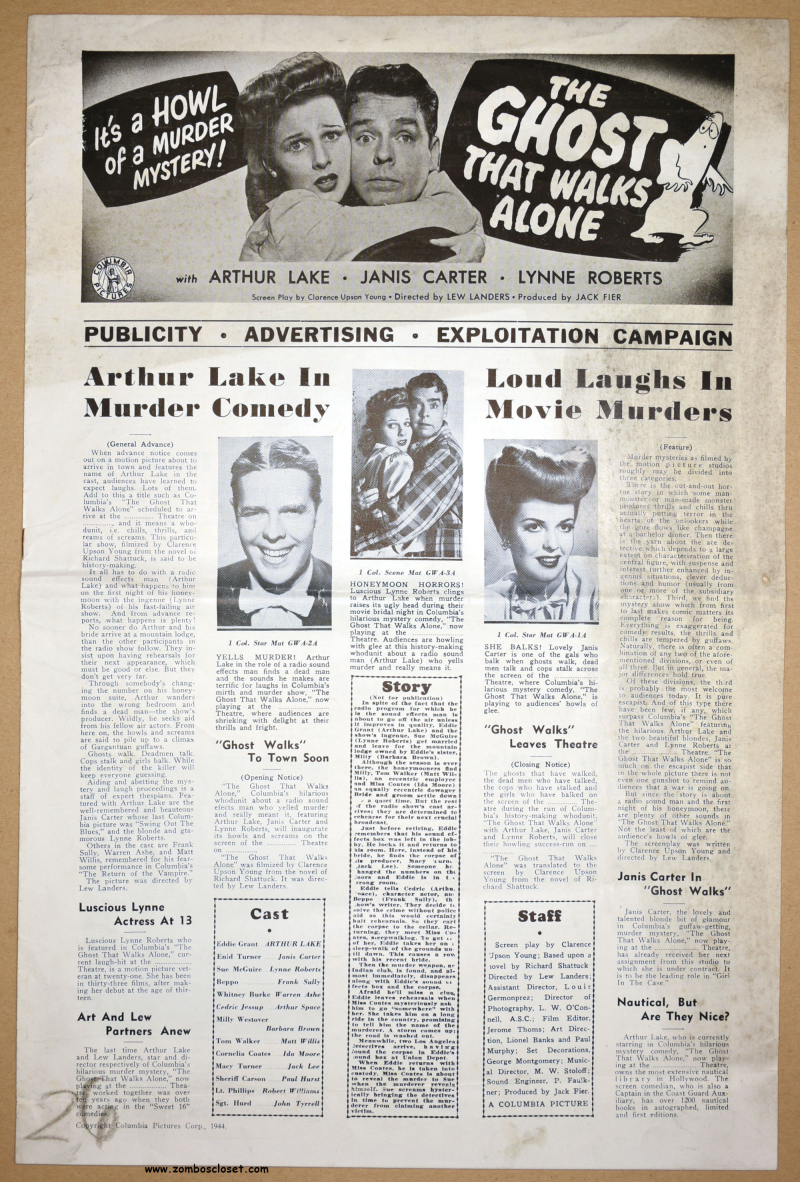 The Monster That Challenged the World (1957)
Mexican Lobby Card

Okay, giant mollusk monsters doesn't sound very scary, but the gooey stuff they spewed out was pretty disgusting. So there's that. One of my favorite 1950s monster movies. Of course, the men do all the heavy lifting and the women scream a lot. That speargun looks oddly placed, doesn't it? 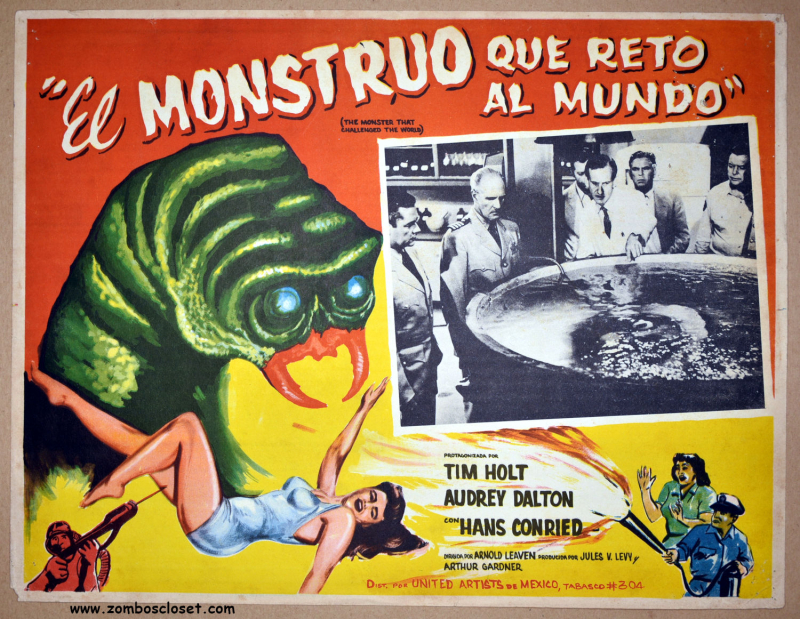 Another 1940s crime story with little to do with ghosts, courtesy of Monogram Pictures. Joan Woodbury played the Queen in Bride of Frankenstein. 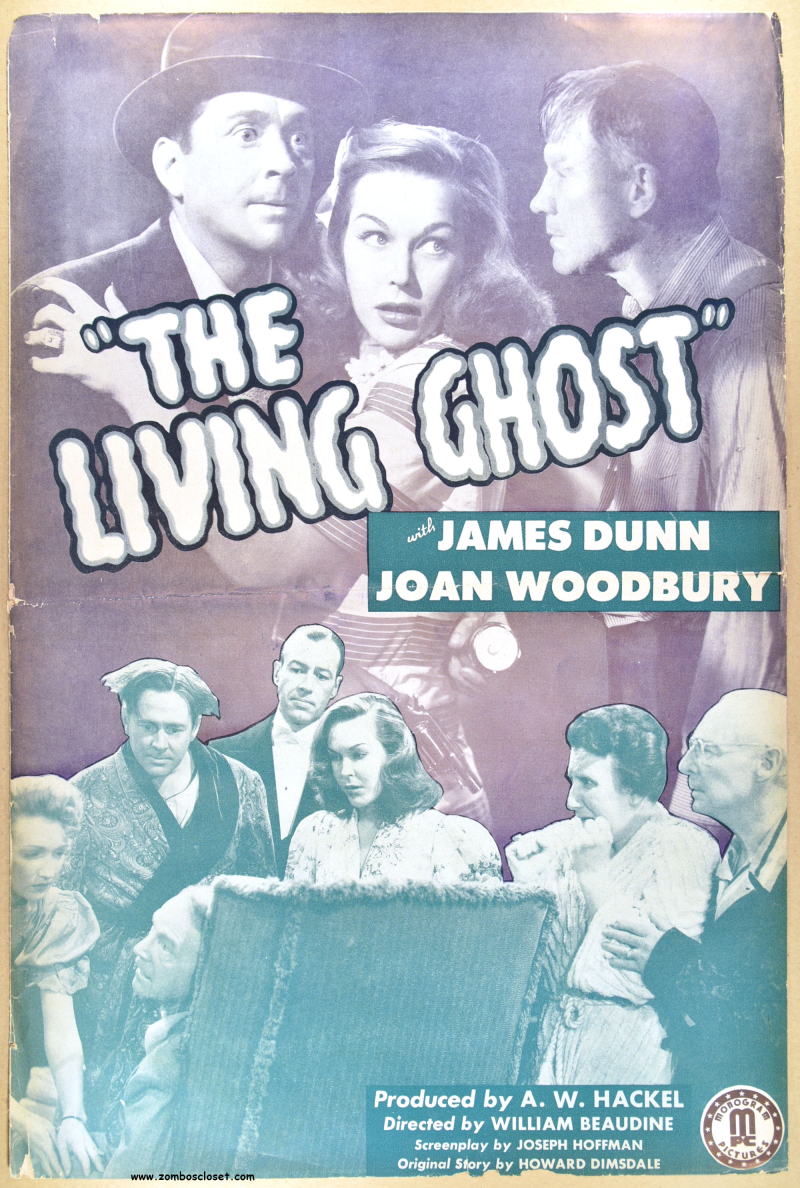 Quite a bit of promotional push in this pressbook for Whispering Ghosts with Milton Berle and Willie Best. Best also starred with Bob Hope in The Ghost Breakers. Best's movie output was prolific, but according to Wikipedia "is sometimes reviled because he was often called upon to play stereotypically lazy, illiterate, and/or simple-minded characters in films. Of the 124 films he appeared in, he received screen credit in at least 77, an unusual feat for an African-American bit player." 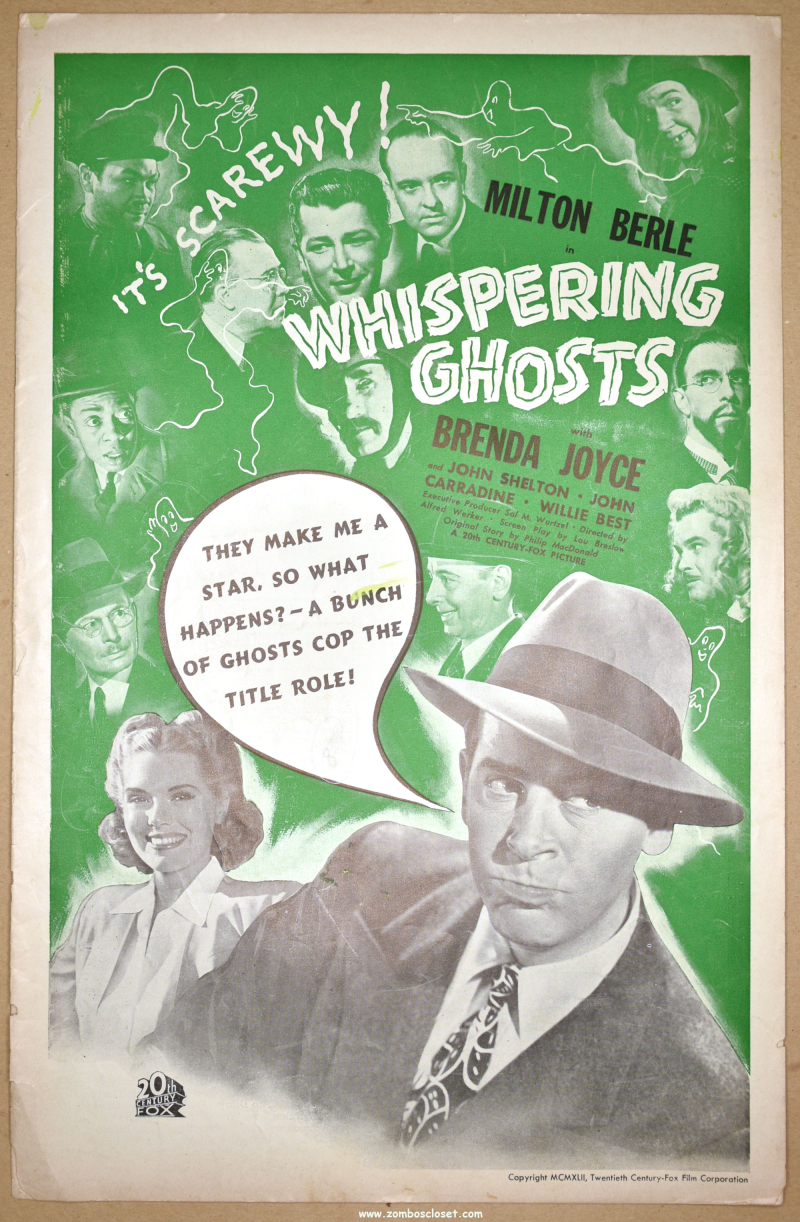