An odd Mexican lobby card, this one. Tobor El Magnifo originally was released through Republic, with the Republic seal and distro information printed on the card. You'll notice this card has the seal blacked out (bottom right), and the distro information blacked out (bottom center) and reassigned to Distribuidora Sotomayor. What's very interesting is that the changes were made and the card reprinted. Even the paper used, a nicely textured and less acidic paper stock, seems a more expensive choice than the usual cheaper pulpy kind. When I first received this card, I thought it was a knock-off, but now I'm thinking it's a re-issued printing (which happens a lot) for the new distributor's run of the movie.  But unlike other cards I've seen, this distributor actually spent more money to reprint the lobby with their information, rather than simply marker out the previous info by hand. 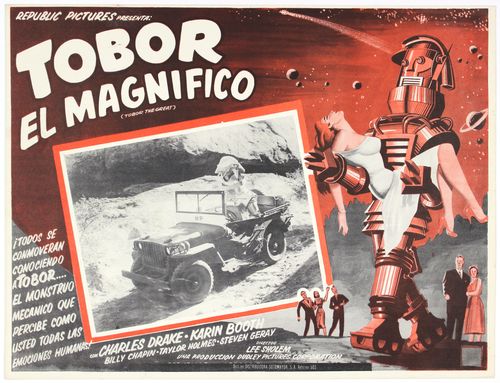 Posted at 08:00 AM in Azteca/Mexican Lobby Cards | Permalink