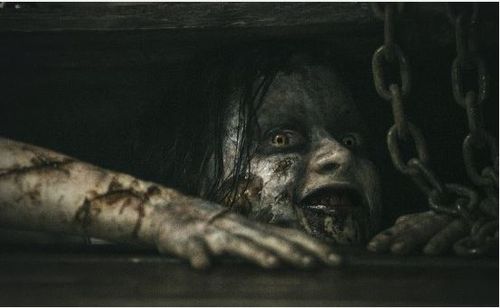 You already made up your mind about this reimagining, didn't you?

If you're a fan of the original, you're thinking why bother? Even if you're not a fan, you're probably wiped out from all the bad remakes and updated takes on the tried and true, right? So you already have the notion that if Hollywood can't think of anything new, why bother, right?

It's easy to say this movie isn't as good as the original The Evil Dead because it doesn't have Bruce Campbell, but that's not entirely true. What's also missing is Sam Raimi's hysterical camera that follows the demonic torture so well in the original: it tilts dangerously, it frantically moves around, and it becomes another panic-stricken character desperately trying to survive the night. Fede Alvarez can mimic those camera motions to some extent, but he never reaches the feverish pitch of frenzy in this film that assails Bruce Campbell in the last 15 minutes or so of the original.

But that was 1981. You can be nostalgic all you want for that wonderful decade of horror movies—I do fondly remember it—but this Evil Dead does have its moments, and considerably better practical makeup effects, and even more gore, vomit, and mutilations to shake up the respite in the derelict cabin in the woods.

This backstory isn't as much fun, though. How can you top finding a Panasonic reel to reel tape recorder in a deserted cabin's decrepit basement, and that professor’s unusually calm voice setting events in motion by repeating all those bad words?  And what about that smoky atmosphere of waiting evil, pouncing willy-nilly on each victim, produced with less production gloss and more average-looking victims, making it more effective because watching pretty people get offed isn’t all that thrilling: average people getting killed brings it closer to home for average you and average me.

I even watched the original movie after seeing this one to jog my memory. When you do a remake of a horror classic it's to be expected you’d want to watch the original to see which one’s better.

Critics and fans look for differences and similarities and fret over them. But it’s the little things that amount to whether a movie that’s based on another movie will stand or fall. So, yes, everything counts.

Now, of course Alvarez and company take bits and pieces from both the deadly serious Evil Dead and crazy-sh*t Evil Dead II, but I'll stick to the serious movie for comparison since Fede keeps his movie serious.

For one thing, this updated script is more practical. Instead of college kids on Spring Break heading to the woods for a weekend of fun, a group of friends are set on a noble mission, to rescue the drug-sopped Mia (Jane Levy), whose brother, David (Shiloh Fernandez), has been less rescuer and more absentee, so you know he's got guilt up the wazoo. Which is why he's slow to realize Mia's problem is not the drugs but a demon possession. Even when her voice gets all demon-like and her face turns to demon-veiny-and-puss face, David's slow on the uptake.

A little too slow to sustain our credulity, but this is a horror movie, and much dramatic tension, or so some directors today believe, is garnered from an audience screaming in their minds how dumb-sh*t stupid YOU ARE DAVID! and when ARE YOU GOING to realize Mia's not Mia but the Taker of Souls come to make you and your friend's the devil's bitches.

Then again, maybe it was just me thinking that.

But after all the juicy face-slicing, gallons of blood-vomit projecting, lots of dead cats hanging in the basement, the finding of an evil looking book wrapped in barbed wire and human skin, and enough demented woodcuts in it showing nasty things happening to anyone stupid enough to read the bloody damned thing, well, my mental scream sparked naturally from my credulity dial getting twirled way past the red zone.

Then David starts pulling out the duct tape to patch up the slicing and dicing and meaty chunk craters of damaged flesh in his friends and I start to wonder if Alvarez is going Three Stooges intent here, but below the radar and without the yucks, which pulls my brain right back into the story.

A gushy and stringy dismemberment or two later and David's doing a Bruce Campbell with a bit of the chinny-ness to save Mia, creating a memorable ending that makes this movie stand on its own and looking good for a sequel.

I think Mia's got even more chin going for her than Campbell.