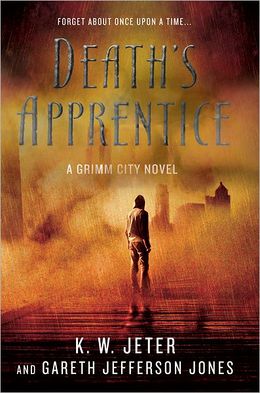 Meshing diverse story elements from Grimm's Fairy Tales, the writing team of K. W. Jeter and Gareth Jefferson Jones create their own tale of three heroes taking on the Devil, who lives in his dark tower of an office building. Of course I don't need to tell you what business he's in, do I?

Hero Blake is cursed. He's stuck with a raincoat that's stuck to him like his skin, and would choke him lifeless if it wasn't for his determination of will. The curse came courtesy of the Devil and the chance encounter where Blake chose poorly, but still managed to keep his soul intact. Hero Hank is a giant of a man with the strength to match his size and a complete lack of fear that makes him fearless. He's brought into a deal with a gnarly dwarf lawyer who wants him to kill people who may be a threat to the lawyer's unnamed client, but since the lawyer doesn't know who is a threat, specifically, Blake manages to clean up the city's riff raff rather quickly,  taking out anyone he thinks may be that threat. Hero Nathaniel is Death's apprentice, and at only 17 years of age, he's sold into servitude by his father who traded a little more life-- ten years worth--for his son's soul. Nathaniel's point of view makes this a young adult novel, but other points of view kick in as needed. Being a young adult can feel a lot like that--dealing with others' points of view--so it works well for the narrative.

Death likes Nathaniel, even though Death doesn't have the emotion to show it. And Nathaniel likes his job to some extent, even though the divine pins that keep his soul intact are weakening for some unknown reason that not even Death knows why. Which is surprising to both of them. When all three heroes are brought together, they learn their combined weaknesses are actually what makes them much stronger when united, and Nathaniel must choose between Death's direction to live his fate impartially or change it deliberately, but blindly.

And even here the authors have managed to include zombies.

I won't hold it against them. The walking dead work well within the story's context, although they stretch the fairy tale thematic fabric a bit thin with their presence. Then again, who else would you want to go against the Devil and his damned minions? The fisticuffs are directed with the usual ups and downs, tide turning this way and that sort of thing. The novel's style is also written concisely, without discernible highs or lows in sentence structure or cadence that will distract the reader.

While the Devil ponders the dessicated tree of life that suddenly bears fruit in the courtyard beside his tower, a forwarning of the ever popular prophecy angle that was foretold to him, and Death, who can see all the ends of life at all the ends of the world, but can't see Nathaniel's own end ponders why, Grimm City becomes another Buffy the Vampire Slayer's Sunnydale: a location situated in close proximity to Hell, or is a suburb of Hell, or may just be a metaphorical Hellish morass; it's hard to say, and because of that it does present a bit of a learning curve when reading the early pages. Jeter and Jones hit the ground running and the reader will need to keep pace by accepting the premise without question and the goals as they come; further explanation may be forthcoming in the subsequent titles in this series. There are certainly enough loose threads to tie up at the end of this one to warrant more explanation.

Which leads me to the question of contextual integument, you know, the "word stuff" between the larger paragraphs of actions and motives that supports a novel by providing all those little background things that flesh out the world the characters are characterized in, or in this case the city around them. Jeter and Jones are light on contextual integument when they should be heavy with it. I've recently read a few novels where I felt the author needed to trim down the pages; here I felt they needed to add pages. To be fair, many fairy tales are focused in this way, telling their stories with minimal overhead while delivering their moral meanings.

But, then again, they don't normally resort to zombies to beef up their storyline.