« Double Bill Pressbook: The Haunted Strangler and Fiend Without A Face | Main | Movie Review: The Girl With the Dragon Tattoo (2011) » 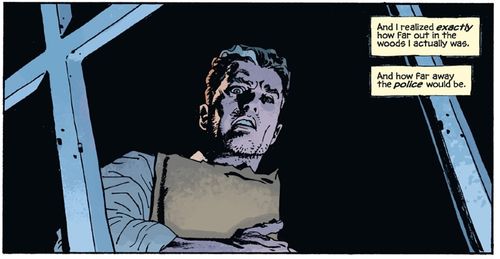 Noir and Lovecraft seem to go together like Victorian and Gothic; all dark tones and hardboiled moods that lead to bruised knuckles and bloodied bodies dumped in greasy alleys or sprawled across attic stairs or gasping out last breadths while some hellspawn squishes close by.

No creeping tentacles here. Yet. But the sense that something nasty and lugubrious and mucousy wet, sliding and sloshing around the next corner, is always on high. First issues are so hard to nail down tight; either they're too bland with lengthy exposition leading nowhere and no revelations, or too ham-fisted with constant rote motion and not enough exposition to build suspense. Good crime and horror needs that suspense, but they also need enough action, uncertainty, and characters having lousy luck at the worst possible moments to make you turn the page or read the next issue. Brubaker, Phillips, and Stewart hit the jackpot here. Words are as important as imagery for the noir aesthetic and on both counts this first issue provides the right mix of textual and visual narrative in its pages, which run from 5 to 8 panels deep each page in a traditional layout.

The story starts with a funeral and loose ends needing to be tied up before they strangle somebody. There's the obligatory old dark mansion, papers to go through, the handsome and rugged in-over-his-head guy who's made all warm and masculine inside by the mysterious woman who holds the answers to the questions he's about to have his face rubbed in by sinister big henchmen with dark glasses and impatient demeanors. The backstory goes back a world war or two, and there's a few splattered cultists who probably shouldn't have done what they did. But now it's too late.

At 24 pages, this is a fine read. You know fine reads, don't you? They're the type we used to get before comic books went on a diet and cover prices fattened up. So kick back that two fingers of scotch, puff on that Camel until the smoke makes you teary-eyed and your throat hoarse, and pucker up for that big, wet one. Only don't be surprised if it's slimy and cool on the lips and smells like yesterday's catch.

This is noir horror, baby.