« My Halloween: Evil von Scarry | Main | The Beast With A Million Eyes By Professor Kinema » Five questions asked over a glowing Jack o'Lantern, under an Autumn moon obscured by passing clouds...in between mouthfuls of candy corn...riding on the WGON Helicopter...

Halloween has always represented a sort of "cutting loose" in my life. I don't normally dress as Dr. Clayton Forrester from Mystery Science Theater 3000 in my daily life, but on Halloween, it's not only perfectly acceptable, but expected. Growing up, it was that one day a year when my brother and I would start planning what our costumes would be weeks before the actual day. We spent our childhood in a very rural setting, and so we often couldn't go door-to-door. Our parents would drive us and during some years, actually make our costumes for us.

I'm from northern Michigan, so the autumn was always crisp and clean, leaves on the ground, occasionally a snowflake or two. The air was perfect, the sun seemed to shine a little differently during October. The mysterious mood generated by "scary" costumes and a good ghost story or three nestled into my memory, sending a part of me back in time every instance I hear the word "Halloween." It was important to me for the feeling of freedom, both in attitude and in nature. 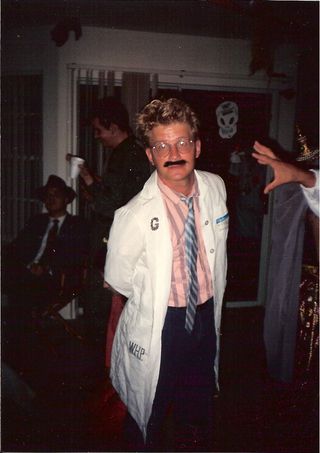 The child-like spirit is first and foremost. You're "too grown up inside" to enjoy it? Tough...you better learn to quickly because that's the part that comes out during Halloween. A sunny day with a few clouds here and there, and a blue sky through the bare trees. The air has to be crisp and cool, but not too cold. There doesn't have to be a party - I'm fine with not going to one, although they're usually a good time. Plenty of candy for trick-or-treaters, and when that's done, two or three carefully-selected horror movies are on the docket to close out the night.

Believe it or not, I'm an antique-y, vintage-y kind of guy. I have specific things I look for when I go to an antique store or flea market. The Halloween collectibles I enjoy now, or want to get a hold of, are usually the ones I grew up with. Specific decorations or toys that I might have had when I was a kid in the 70's.

In fact, that's my cut-off point, right around 1979. Maybe into as late as 1982 is OK, but there's a certain kind of magic attached to those decorations or toys that my mom would put out a week before Halloween. I can't name anything specific, but I'd know it if I saw it. Such is the fun of collectible hunting.

What was your first Halloween...?

I try to remember my first experience with Halloween, and as I get older, the memories get a little hazier. An early one that stood out for me was 1974. My brother and I wanted to be superheroes, and you have to understand that the both of us have been comic nerds since the days when it wasn't "cool" to be a comic nerd. The only problem was which one we wanted to be. We were immense fans of Thor, Spider-Man, Superman, both Captain Marvels (you comic fans know what I mean by that), the X-Men, the Metal Men. The problem was settling on one. That was OK, because our parents did it for us.

We had oversized books of Superman and DC's Captain Marvel, so that is what they went with: homemade costumes that, while not as intricate as the cosplay experts can churn out, was good enough for us in 1974. Sweatshirts, shorts over pants, and capes made from old dress shirts...they weren't perfect, but that night we were the mighty Justice League brought to life in a seven- and four-year-old's imaginations. And we got some pretty sweet candy that year.

What's the one Halloween question you want to be asked, and what's your answer?

One question I wouldn't mind being asked about Halloween is "What's a good movie marathon for Halloween night?"

My answer might depend on the personal tastes of the person who's asking, but I could provide a general list that I might run with on a good Halloween night. First off, without question, is the original 1978 Dawn of the Dead. That's a Halloween tradition. For sheer atmosphere, I'd recommend the original version of The Haunting. You really can't go wrong with that one. The recent mockumentary Lake Mungo is a fantastic chiller that depends on atmosphere. For downright scares, I usually go with the tense, frenetic [REC] films from Spain. For more international atmosphere and creepiness, I'd recommend The Pang Brothers' stylish The Eye(NOT the remake). For some yuks of the comedic kind, it's good to pick from the trio of Shaun of the Dead, Zombieland, and Evil Dead 2.

So many to choose from, so little space.

Come fly the friendly skies of horror at The WGON Helicopterhttp://wgonhelicopter.blogspot.com

Thanks, John, for including me in this year's walk down Halloween's memory lane!

Great memories of the Halloween season, Dod. And bonus props on the Forrester costume and excellent movie marathon choices! ;)