Marketing Your Book and Your Part 2
By Scott M. Baker 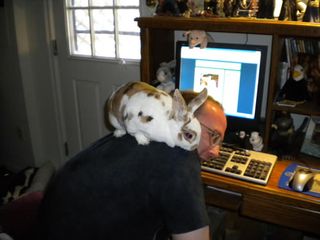 So that’s it? I set up a blog and a webpage and I’m done marketing my book?

Hell, no. In addition to a webpage and a blog, you will also need to establish an account on some of the various social networking sites (SNS) available on the Internet. Facebook and Twitter are the most common, although there are dozens of SNSs available. If there’s a particular site that caters to the audience you’re trying to reach, by all means add that to your Internet presence. But don’t go crazy and establish a profile on every SNS available, because the more time you spend maintaining these sites and networking means the less time you spend writing.

You will also want to join a few forums and/or chat groups to make your name known throughout the community. I suggest a mix between those directed primarily to writers and those frequented by fans of your genre. A good place to begin is Goodreads. This site is dedicated to writers and readers, and it maintains numerous chat groups that span all genres. Beyond that, do your research and check out various forums/chat groups until you find a few where you feel comfortable visiting. As with the social networking sites, moderation is the key.

Cool. I love Facebook. I have a couple of dozen zombie pets that I’m taking care of.

You’re missing the point. Your goal is to sell books, not to steal your friend’s zombie rabbits or create photo albums of your last trip to Europe. You need to market yourself as much as your work. The best way to accomplish that is to establish a reputation as a reliable expert in your genre. Don’t just use these sites just to talk about yourself and your latest writing project. Discuss books and movies, offer the latest news in your genre or the publishing industry, or maybe write a series of blogs on how to get published. When visiting websites and blogs other than your own, if you find an interesting post, share it on your SNSes; your fans and other bloggers will appreciate it. And don’t get discouraged if you don’t have a thousand followers at the end of the first week. This is a slow and labor-intensive process, so be patient. If you market yourself correctly and give it time, slowly but surely you’ll build up a following of fans who will want to read your book, who will tell their friends to read it, and who will eagerly await your next novel. (NOTE: Gary Vaynerchuk's Crush It!, available from Amazon, provides an excellent step-by-step approach on how to achieve this.)

There are two things to keep in mind when blogging and networking.

First, always use your writing name when posting. While it might be fun to call yourself vampireexpert69 on Facebook, it makes it almost impossible for your fans to find and follow you.

Second, and this is a matter of personal opinion only, avoid controversial subjects and flame wars with fans or colleagues. This is one of those instances when bad publicity is worse than no publicity for beginning authors. If you’re a vampire author who is not a fan of Twilight, don’t bash the series every chance you get. Don’t take sides on political issues, militantly support controversial causes, or publicly and consistently lambast a colleague as a hack who can’t write for merde, otherwise you run the risk of losing major portions of your fan base. As a writer trying to establish him/herself, you can’t afford to alienate potential readers.

Finally, there are other things you should do to market yourself and your book:

Book signings: These are your most important venue for building your fan base. And don’t limit yourself just to book stores. I do a lot of signings at comic book stores. Conventions are also a big draw for fans. Book expos are a great way to meet potential fans. Specialized conventions are also a big plus. For example, if you write about animals, attend pet expos. Of all the horror cons I’ve attended, authors are among the most popular celebrity guests. John Lamb, author of the Teddy Bear Mystery series, once told me that he sells almost as many books at teddy bear conventions as he does at book store signings.

Guest blogging: These are vital for new authors to get their names out in the public domain. There are many established blogs that allow aspiring or first-time authors to guest blog on their sites. I am indebted to Dawn's Reading Nook, Adventures of the Cautionary Tale, Back of the Book Review, and several genre sites for allowing me the opportunity to talk about my writing. I’ve made several new friends and fans thanks to their generosity.

Look for every opportunity you can find to get your name out there. Convince your local radio and television stations or newspapers to interview you as a hometown celebrity. Arrange virtual book tours (which is especially important if you’re an e-book author) where you have chat room discussions on various forums. Spend the time and effort to create a video trailer for your book that you can post to YouTube. Donate autographed copies of your book to charity events, or do book signings at such events with all the proceeds going to that charity. These are just the proverbial tip of the iceberg. There are dozens of things you can do to publicize your book, all of which inevitably increase sales and lead to more exposure.

Well, that wraps up my blog series on how to get published. Any questions?

Yeah. You just described a hell of a lot of work to go through to be a mid-list author. Why would anyone in their right mind want to write for a living?

Good question. Let me answer that next...

Thanks Scott! Look forward to having you back on Adventures of the Cautionary Tale