« Meet the Horror Bloggers: All Things Horror | Main | Movie Review: Alice In Wonderland (2010) Or Is It Underland? » 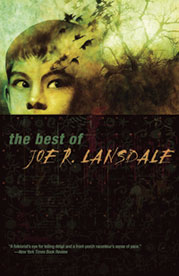 What Batman did for me, though, was make me understand that the world was bigger than I knew, that there were things beyond getting out of high school and going to work and waiting for retirement. Like Batman, I wanted to be something special. (Joe R. Lansdale, from his introduction to The Best of Joe R. Lansdale)

Take a big fat oak barrel, pack in Ray Bradbury and Charles Bukowski, slice and dice a few big young scorpions with all six juicy segments of their tails, add some boiled spinach and watery buckwheat, pickle all with half Jack Daniel's Tennessee Whiskey and half Southern Comfort, piss, and spit some chawing tobacco into the mix, then seal it up good. Let the barrel sit for a few years, forgotten, in a beat up Pontiac pickup truck parked in the last row of the last aisle in the last drive-in down a long dusty road. When you finally open it up you'll find an author like Joe R. Lansdale. Just stand back a bit when you do 'cause he might be cussin' up an awful lot and swinging low.

Lansdale is as important an America Original as Mark Twain, only if he had written The Adventures of Tom Sawyer, he'd have had good ole boy Tom bashing Huck's brains in with a tree branch, for chump change and just to see him bleed, on a bright sunny day, close to a white picket fence to show the blood spatter better. Then he'd have Tom go smiling off to eat some warm apple pie as a hungry dog ate the rest of Huck up, with both enjoying every bit of their meal. Slowly.

There is something just not right with Lansdale and his stories. No one is ever really content, breathes in life easily, or dies happy--let alone quickly enough. Except for maybe Elvis in Bubba Ho-tep, and perhaps that resourceful survivalist woman who had an Incident On and Off a Mountain Road. But for every survivor, there's dead meat walking; for every flight from the Goat Man there's always a rickety bridge to cross to safety; and for every swim among the ghostly fishes in the primordial, phantasmic desert sea of Fish Night, there's a big old shark waiting to gobble down. It makes you wonder what kind of childhood Lansdale had. He tells us all about it in his introduction, Crucified Dreams, that it's filled with comics and good times, but I think he's hiding something. His childhood seems too normal for a guy who writes so twisted like he does.

You will find the long and the short of his stories here; human monsters, prehistoric monsters, mummified monsters, drive-in monsters, they all cast long moonlit shadows or walk boldly in sunlight. Like in Mad Dog Summer, they even live close by and shake hands warmly while they wait to spill your blood. Some are old, some are young, and some are timeless. Even their victims and near-victims and future victims are old and young and yearning to be timeless. Aging, death, and the molding process in-between provide the katas to many of his stories.

On the Far Side of the Cadillac Desert With Dead Folks we meet up with the bounty hunter Wayne and his fugitive Calhoun, at a honky-tonk called Rosalita's, for cold beer and dead dancing. Since the lab stuff escaped into the air there has been a lot of dead folk to take advantage of, let alone dance with. There's also a new time religion, a busload of zombies wearing Mickey Mouse hats, and nuns that give their all for Jesus to make this the really far side of the desert; as far as Jesus Land.

The Night They Missed the Horror Show turns out to be a hell of a night for one mangy dog and two buddies working their way hard to boredom. Leonard doesn't like the black guy in Night of the Living Dead; he doesn't like any black guys. But skipping the drive-in turns out to be the worst decision he will ever make. The second worst is what he does to that dog. Those Rednecked, snuff movie-watching, dog-loving fat ole boys do the rest. The imagery in this tale of human monsters, both dog-hating and dog-loving, is too real for a comfortable read. Stock up on those happy thoughts before you read this one: you'll need them to get through it.

Like a freak show banner unabashedly heralding the grotesque and arabesque, in this collection you will see the amazing aging Elvis finding his mojo again by taking care of business, watch in awe how Godzilla falls off the wagon in Gozilla's Twelve Step Program, taking most of the city with him, and nervously laugh at the Fire Dog for the fire department, which is a great job while it lasts, especially since they stopped using dogs a long time ago. And once Lansdale has you inside his ballyhoo tent of nightmares, there's more waiting to shock and horrify you.

Profanity-laced words coalesce into sentences punching with the precision of a martial artist, which he is. There is no complexity to his paragraphs, no grammatical excess in how he describes his people and places, but his chi (some would call it mojo) is  always directed to letting his characters tell their stories through their words, their actions, with insinuations of what makes them either unsure, fearful, or to be feared. Like a mischievous Jean-Paul Sartre, Lansdale shows them where the exit is, but takes great pains to block their way to it. There is no seeing the light or finding the faith here, and salvation comes at a cost.

A New York Times review quoted on the front cover states Lansdale has "a folklorist's eye for telling detail and a front-porch raconteur's sense of pace." Obviously the reviewer doesn't know him like I do. I rather imagine Lansdale's stuffed that folklorist's eye into his back pocket just before he ran down the back-porch steps with a steaming apple pie stole hot from that raconteur's kitchen. The eye's to toss to that mangy dog that ate poor Huck up because no one wants to be bothered when they're eating homemade apple pie. Not even Lansdale.

An uncorrected advance reader copy was used for this review.

"Sinister side and sweet nostalgic side." That's a perfect way to describe his work.

Great piece on one of my absolute favorite writers. Despite his prevelence in the realms of horror, I feel like I'm constantly recommending (begging) people to read his work. He has an amazing imagination, a sinister side, and a sweet nostalgic side that I've appreciated throughout his career. Leonard Pine and Hap Collins deserve a spot among literature's greatest heroes.