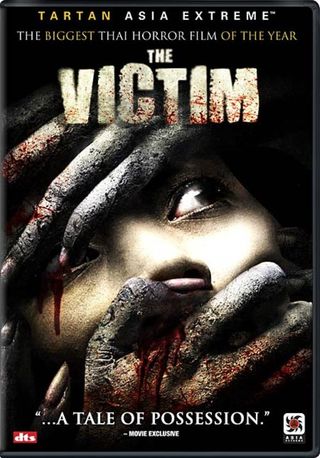 "Maybe you can reenact the mystery?" said Lawn Gisland. He stretched his unusually long legs out in front of him and yawned. "Like Ting, 'cept less'n the melodrama a mite." He pulled at his cookie duster. "Say, Zoc, squeeze me 'nother one of those cappurino's, por favor."

"Sure pardner," I said, firing up the old cappuccino steam engine. The sound of pent-up steam escaping echoed through the cinematorium.

Zombos continued to look high and low for his eyeglasses, holding up our viewing of the Thai horror movie, The Victim. We were half-way through it before Zombos needed to hit the toilet; three large mocha cappuccinos were a record for him. When he came back he realized he misplaced his second pair of eyes.

Lawn stood up, all six feet and three inches of him, and joined the search. Having starred in numerous Westerns on the little screen during the 1950s and 1960s, he and Zombos went way back together. He had hung up his spurs and retired to Florida to wrestle gators for the tourists. Getting bored with that he scratched his itch by touring as a circus cowboy, doing trick shooting and fancy riding. He was visiting the mansion while the Smith and Walloo Brothers 3-in-1 tent show set up in Long Island. For a man his age, he didn't show it. Zombos often joked that Lawn must have a decrepit looking portrait in his attic like Dorian Gray.

"Here. Wet your whistle while you search." I handed the cappuccino to him. He downed it in three gulps. Something crunched sharply under his right Black Jack Hornback Alligator boot heel as he handed me his empty mug.

"Found them," said Lawn. He stooped to pick up them up and handed the mangled eyeglasses back to Zombos.

After I hastily retrieved Zombos' second pair from the library we continued our viewing of The Victim.

Considering Thailand's strong superstitions about ghostly phenomena, it's a wonder Ghost Hunters Jason and Grant haven't visited that country yet. In The Victim, spirits are everywhere, especially as the sprightly aspiring actor Ting (Pitchanart Sakakorn) goes around reenacting the victims' parts in real-life crime scene recreations, places where bad karma is rife.

One spirit in particular piques her interest, and challenges her acting skills to the fullest as she reenacts the circumstances surrounding the disappearance and death of Meen, a former Miss Thailand.

It soon appears that Ting is losing herself as she prepares for the reenactment of the crime, succumbing to violent flashbacks involving Meen, and disturbing, sometimes bloody, visitations by earthbound ghosts looking for help or vengeance.

The ghostly imagery, directed by Monthon Arayangkoon, moves between poetically eerie glimpses of a genuinely unnerving twilight world filled with pitiable and vengeful spirits at arm's reach, and the usual shocks we are now accustomed to. The pacing slowly moves the story along, and the interplay of bright colors across light and dark scenes, contrasting with darker-toned scenes earlier in the movie, provides visual cuing for the sudden story within the story transition. Just when you think you know what's going on, bingo! you scramble for the remote to go back and see if you missed something.

In an unusual move for Thai horror, Arayangkoon pulls the rug out from under Ting, Meen, and the whole criminal scene investigation storyline by beginning a new storyline, creating a story you thought was happening within the story that is happening. While it starts out as a ghost story, it morphs into a "who's the ghost?" story, and even then, not satisfied with changing Ting's role completely, and meddling with the principal ghost involved, the reasons for all the vengeful havoc befalling Ting and others is revealed to be entirely different from what it seemed to be.

The Victim is an ambitious, more complex movie than usually comes out of T-Horror cinema, and it can be confusing, especially with the little helpful English subtitles that fail to capture the nuances of the Thai language; but it's still a pleasantly surprising departure from the usually straightforward horror fare we've come to expect from Asia. The cultural oddity, for us, with Thai police reenacting crime scenes using actors and the alleged criminal to provide the press with a photo op, and perhaps the spirits of victims with a modicum of peace, separates us from the business as usual horror shown in American cinema, and puts us off-balance immediately.

Drawing strength from its cultural perspectives, the movie draws on real crimes, and was shot on the actual locations where victims met their violent deaths. Building on this unpleasant reality, the movie's artificial reality has an earnest sense of its supernatural underpinnings. The carefully accentuated coloration of these locations, Ting's flashbacks, and the ghostly phenomena that befalls unsuspecting victims creates stark contrasts against each other, especially the later scenes, using a carefully executed palette that is above the over-used blanched fluorescent lighting simplicity seen in Saw, Dark Corners, and other American hard horror endeavors.

With the revelation of the second story, entering on the heels of a revealed lesbian relationship, the movie becomes a who's next? more than a whodunit?, and characters are powerless against a malevolent spirit that neither a traditional Thai spirit house or magic-bestowing tattoo inked with a bamboo needle will appease or avert. In one notable scene, framed through a narrow doorway, a pair of ghostly hands, at the ends of stretching...stretching...stretching arms, reach out to grab one unsuspecting victim.

Watch this movie late at night, when all is quiet and the world is right, and you just may find yourself checking to see if the front door is locked. Again, and again.

Just remember that doors don't stop ghosts, especially when you're alone and in the dark.

Agree completely with your review. I haven't been this creeped out watching a horror movie since I was a kid. Pretty disturbing.